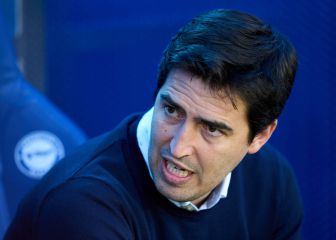 Xavi style: “Xavi’s idea has been to reaffirm himself in the Barça that we know. The team is betting on a positional game, it is dominating, it advocates a lot of pressure after losing, it submits the rivals and the results are being better. It has followed the scoring rhythm of Real Madrid, who seem to be the champion, and in the last game they were quite superior”.

Is it time to give Barça another scare, like in the first round?: “It is perhaps more difficult because they lost the other day against Cádiz. They had a scare despite having many chances. They did not succeed and the rival goalkeeper was very good. Surely after that post, the next game you will be more aware and that’s what we expect.”

How is this Barça different from the one that came to Vallecas?: “In many things. In addition to the game idea and the change of coach, new players have come, who are giving him other things on the offensive plot. Aubameyang brings a lot to the space. He has recovered Dembélé, Adama and Ferrán for wings, which have a lot of imbalance. Surely we catch them in a better state than in Vallecas and the Camp Nou is always difficult. It’s a big field and they are comfortable, but we have to look at our options”.

Minutes to Falcao: “The other day we wanted to put Radamel on the bench, despite not having trained almost with the group, because he is also important. He is a player with a lot of experience and a mentality that helps us from the outside. If he gets better and we consider it opportune, obviously without being as he and we would like, because it could help us”.

Keys to get something positive out of the Camp Nou: “It’s a bit about being faithful to what we are: brave, pressing very high or playing protected, in a low block. In the end there will be moments for everything. We don’t usually change too much, but Barça forces you, at certain moments, to play the game that you don’t want and we must be together and strong. The level of commitment and solidarity, of covering passing lanes, can’t be missing because if you don’t have it, you don’t even have to start”.

The victory in Cornellá: Important at a psychological or qualifying level?: “Qualifying. At the beginning of the season you are looking to establish your idea of ​​the game, the combination of players that give you a good feeling, but now practically nobody remembers the previous game. You live on the points, the classification and achieving the objective. We come of some games in which we considered that we should have added more and the prize had not just arrived. On a psychological level it is also important”.

See also  Positive signals for the arrival of the Apple Watch Pro!

Saveljich State: “Esteban hasn’t joined the group dynamics. He has started to train individually, at least on the pitch, but there isn’t that much left in the league and I don’t know if he can help us in these games.”

Do you see yourself training Rayo next season?: “It seems that salvation is on track, those are the magic words. What we have to do is seal it and get it, that’s what we’re all focused on. There’s no doubt about it and that’s all that concerns the club, me and the players” .