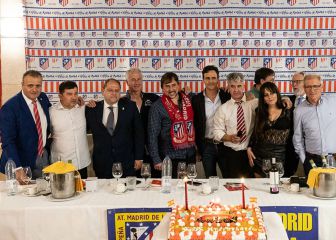 Who tried it knows. And he won’t forget. Because in the week of the end of indoor masks, 15 red-and-white clubs from the north of Spain traveled to La Bañeza, León, to experience a special weekend: the first one almost like life before, as it was known before March 2020, for a very special anniversary, that of the city’s red-and-white rock ‘Un Sentiment’. There were many acts during Friday and Saturday, but its president Nino Pérez repeated, above all, that: “The best thing of all… is getting together. Seeing each other again.” The reunions, the hugs, the skin of the equal, of the brother of the seat, of the stadium, of color. And fill the hall of the Hotel El Bedunia with ‘Athleetis’ throughout the weekend, as if they were the bride and groom of this very special weekend: everyone has it very deeply engraved in their hearts.

Except for the president of Atlético, Enrique Cerezo, to which a last-minute unforeseen event caused him to withdraw, nobody wanted to miss it. For two days, Friday and Saturday, Atlético has beaten very hard in La Bañeza, with José Antonio García Calvo, Juanes (author of the biographies of Koke and Arda Turan and ‘Recuerdos del Doblete’) and Eduardo Fernández, president of the International Union of Peñas. It was Friday and Nino Pérez, president of the ‘Un Sentimiento’ club in La Bañeza, had just put the last details in the room of the Hotel Bedunia where the gala dinner was to be held together with Paco Calvo (vice president) and Indalecio (secretary). With care, with that detail to the millimeter with which he does everything. The walls were flags. In all of them the names in capital letters red and white flag of all those who were not going to be missing, all those for whom this weekend was reserved in their agendas in capital letters, bold and exclamations, for months: the Maragata Athletic Club (Astorga), the Never Stop Believing Club (León), the Furia Leonesa Club (León), the Benaventana Atlético Aviación Club (Benavente), the Lucus Augusti Club (Lugo), the Noroeste Coruña Club (A Coruña), the Lucense club (Lugo), the Palencia athletic club, the Belmonte de Campos club, the Indios del Cantábrico club (Torrelavega), the Medinense club (Medina del Campo), the Valladolid club, the Gamonal club (Burgos) , the Fernando Torres supporters club (Irún), the Las Palmas de La Bañeza supporters club and the International Union of Supporters Clubs.

“It will cost, but Atlético is going to qualify for the next Champions League”. In the speeches at Friday dinner that was the most repeated. Nino said it when he grabbed the microphone to thank so much love, to all those who were, who had not missed, the center of all the photos. García Calvo repeated it. Eduardo Fernandez insisted. The general feeling in those ‘Atleeeti’, ‘Atleeeti’ that accompanied the wild sea bass, the cheeks in that hotel that is one of the best restaurants in the city. Confidence in the team, “despite the irregular season”, is full. “Atleti and Cholo are not going to fail, they are going to succeed.” Although that costs. Five finals are ahead.

The gala dinner was the beginning of these days that the pandemic and COVID have delayed three years. A Sentiment blew out its candles in October 2019 and, since then, all the acts that unfolded throughout the weekend were buzzing in Nino’s head. Because the usual was not lacking. For example, the blessing of the priest Arturo Cabo, whose blessing was the beginning of everything, and the presence of the mayor of the city, of course the hymn a cappella. On Saturday, the match between members of the Peña Un Sentimiento and friends, with a very special Juanes shirt with that Kiko on his back who yells Doblete, after the Spanish wine at Bar Keops, home of the rock, Angelito, essential soul of Un Sentiment, with the walls of his bar also oozing Atlético, so many memories on them. El Doblete was the protagonist of Saturday afternoon, with the screening of the Movistar+ documentary about it and a colloquium talk with Juanes about the anecdotes of that unforgettable League and Cup of 1996 with the memory of the figure of Radomir Antic, eternal. “My tears when I finished watching the documentary, they led to him,” Juanes confessed before starting to speak, while Carol, his girl, also nodded excitedly in the audience. Antic was the person who opened the door to his house, and his personal museum, to act as guide in his ‘Recuerdos del Doblete’, a book published by ‘Al Poste’ when it was 20 years old.

An exciting and emotional colloquium in which the clock was forgotten, lasted more than three hours, and in which the other great guest of the weekend was not lacking: a replica of the LaLiga cup won last season by Atlético. “Everyone’s presence was very enriching”, Nino confessed at the end, “for everything that is contributed, anecdotes, experiences, wasting love and sympathy”, like Atleti courage and heart, like the nephew of Fran, his uncle, another fundamental partner of this rock made up of 240 people whose dream came true not long ago: know the Metropolitan. That’s how he wrote it in his school notebooks, in his trembling childish handwriting full of capital letters, his mother, when she got married, already made it unique: with the Atlético shield on her wedding dress. Nino, on the other hand, is coordinator of the northern zone of the Unión de Peñas. With many, there have been multiple calls, messages but not personal contact, faces without masks, what’s more. “The presence of the supporters clubs, the emotion of knowing each other that there were supporters clubs that we didn’t know each other personally. And the joy of being able to share a table, songs…. And many ‘Atleeeti’…”. She gets excited. The continuation of the sentence is there, in the air, in that room full of scarves that Nino, Paco and Indalecio placed for three days together with the experienced and young hands of Fernando, Luis, Sergio, Iván and Gonzalo. Already forever. Who tried it knows. And he will repeat. Nino is already thinking about the 27th anniversary… Only one thing is certain: La Bañeza will once again be the center of the ‘rojiblanco’ world.