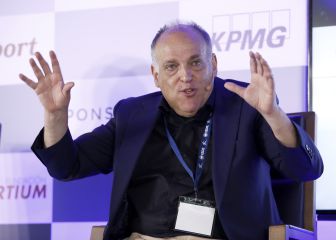 The Cecilio Rodríguez Gardens Pavilion, in Madrid’s Retiro Park, has hosted the third edition of the Forum of the Higher Institute of Law and Economics Sports Convention. The president of LaLiga, Javier Tebas, has participated in the round table ‘Digital transformation in sport’ together with Gonzalo Martín-Villa, CEO of Telefónica Tech; Pablo Castillo, general secretary of the Higher Sports Council; and Rodrigo Miranda, general director of ISDI.

Tebas considers that “sport is not digitally transformed”. LaLiga, the institution he presides over, began its transformation in 2014, thanks to an investment of 240 million euros that had the support of the clubs. A bet that is also part of the agreement with the CVC investment fund so that the teams are digitally up to date.

“It is necessary that the CEO of the company or the president of such a federation have a clear conviction about the digitization of the institution”, he stated. “Of 700 LaLiga employees, 250 belong to the technology department”, recalled its president. A department that controls all the data that affects Spanish football, such as audiences in China or Japan, or the number of subscribers to football broadcasting platforms in Bangladesh.

Javier Tebas has expressed that, thanks to the digital transformation, LaLiga has signed a collaboration agreement with the Chilean league to improve its digitization, as is the case with the World Pádel Tour. “We have signed an important agreement with a federation for upcoming games, but I cannot reveal it yet”, announced the president of LaLiga.

Digital transformation is also the formula used by the institution that presides over Tebas to schedule league matches. “We don’t put them at random, but taking into account attendance at stadiums or television audiences,” has revealed. In addition, he has commented on the sponsorship that LaLiga has with the Burger King hamburger chain: “last year there were 15,000 orders thanks to the digital strategy”.

Finally, he has briefly referred to two of the technological topics of the moment: the metaverse and cryptocurrencies. “The metaverse is not something of now. It already started in 2003 with ‘Second Life,’” has evoked. Regarding virtual currencies, he has ruled that “cryptocurrencies are here to stay. In the world of art it is already working, and in sports it will work for sure”.

Vicente Jiménez: “The pandemic has been an excellent driver of change for AS”

See also  The failure after the break

“For the sports press, the closure of competitions during the pandemic was a disaster, a hecatomb,” The director of AS started his comment. “We ran out of our raw material. We had two options: either disappear or transform. We transformed ourselves”, he commented proudly. Despite everything bad that Covid has brought during these two years, AS has led to an improvement in its data: “After the pandemic we have gained twice the audience. It has been an excellent driver of change for us”, said Jiménez.

The great workhorse of sports journalism is the business model of the future. Vicente Jiménez has recalled a phrase by Jesús de Polanco, former owner of Grupo PRISA: “The truth of a newspaper is its income statement”. He considers that the paper model has been dead for several years and still survives because of the older audience so loyal to newspapers. “The press is no longer what it was 20-25 years ago. Paper will disappear, although it is likely that there will be weekend editions, weeklies, …”, has predicted.

The director of this newspaper has praised the sports press, which he foresees an “excellent future”. In fact, he bets more on her than on the general press: “I would get on the ship of the volume press, advertising, sports, rather than on the ship of the general press”, has been blunt. “Sports journalism has been the one that has digitized the fastest way. We carried out the internationalization ten years ago”, Jimenez recalled.

See also  The negotiations of the New Mirandilla

This search for new markets has produced great benefits for Diario AS. 99% of the audience is of digital origin, the majority coming from foreign editions, Mainly from the US and South America.

The great ‘threat’ that sports journalism faces are Youtubers. “I am interested in knowing how Ibai Llanos does to have these audiences”, declared the director of this newspaper. “We have to keep our minds, eyes and ears open.” But he does not believe that journalism is threatened by it: “What Ibai does is communication, not journalism.”

To conclude, Vicente Jiménez recognized that click bait is a consequence of the digital intelligence of audiences and that is something negative, “although it has always existed”. And it has been launched with the theme of the moment: “I think Mbappé will come to Real Madrid.”