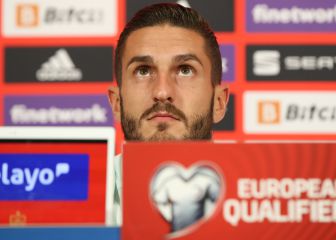 Koke Resurrection He spoke before the match against the Czech Republic. These were his statements.

How do you live having started with Xavi and Iniesta, fighting for a position; and now be with Gavi and Pedri, fighting to protect him?

I have always said that I am privileged to have played with the best, such as Xavi and Iniesta; and now I am also a privileged one. They have a spectacular future and present. I see them well, I am enjoying them and we must try to make the most of them

The season is not over until June 12 and the preseason begins in early July. It’s World Cup year. Bernardo Silva said that this is too much, but also that this is what there is. Does it lower the level of the show to play that much?

Honestly, I like to play football and I love my job. I don’t know if it can lower performance when playing. The templates today are extensive. Personally, I like my job. And, as Bernardo said, it is what it is.

Is there any explanation for the fall of Marcos Llorente?

This year he has had to play right back. He gives everything he has. Atlético needs Marcos from last season but it hasn’t been easy for everyone. I think he has had a good season. We would have liked him to have scored more goals but he could not have been.

In 63 games, he has yet to score a goal for the National Team.

I would like to score and I want to score goals for the national team as well. But if I don’t score, I’m also happy. It couldn’t be and the important thing is that the team wins.

Many athletes were taken for granted by Courtois’s phrase. What do you think?

There is no need to give more importance to what he said. It is her opinion and you have to respect it. More than the good side or another, we are from a team and a hobby. You always have to respect the maximum d What Tibu said is already past.

For you, is Madrid the champion of the Champions League?

If he won, of course it’s fair. We know from our own experience that until the referee blows the final whistle, anything is possible. It’s what they value you for, for winning. And Madrid has had a spectacular Champions League.