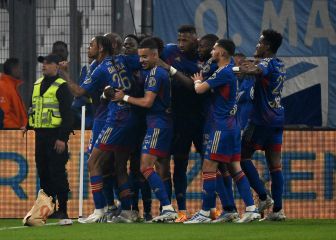 Olympique de Lyon beat Olympique de Marseille 0-3 in a match that tightens the Champions zone in Ligue 1 even more. Peter Bosz’s men won the “Olympic Derby”, a term with which the match is baptized, with controversy, since in the first part Marseille claimed a penalty on Dembélé and in the 0-1 a foul was requested by the striker on Pau López. The victory, deserved by the visitors’ superiority in the second half, tightens the Champions zone even more, since Marseille only leads Rennes by three points.

Despite the poster of the meeting, the truth is that the first half between both teams will not be remembered, at all, as one of the best in recent years. Lyon, aware that Marseille punishes you on a tile, fell back during the first 45 minutes and tried to come out on the counterattack through direct shipments towards the fast Dembele and Toko-Ekambi. For their part, Sampaoli’s men, who rotated thinking about Thursday’s game against Feyenoord (Rongier and Guendouzi were substitutes, as well as Bamba Dieng) enjoyed the clearest opportunities in the first act, the three in Milik’s boots. Marseille claimed a hand from Dembele in the area, but the VAR did not notify the referee that the striker had his hand outstretched at the time of Gerson’s cross.

The Pole, highly questioned for his performance this season, to the point of not even being the undisputed starter at Marseille, he missed three flagrant chances to have given his team the lead. The last one, the simplest of all, in a lateral center by Gerson that found Milik, but the forward finished off bitten to an empty goal. Lyon only had one chance, if it can be considered as such, in a bitten shot by the debutant as starter Barcola (from 2002) that went wide.

As expected, Marseille ended up lamenting the missed chances in the first half. Lyon did not need to play a great game. He was nurtured by two isolated plays, both starring Malo Gusto, a right-back who has tremendous potential, to tip the balance in his favor. The 0-1, with controversy. Dembélé took advantage of Marseille’s insecurity in a set piece and allowed Lukeba to score at will. Marseille claimed the forward’s foul on Pau López, whom he accidentally stepped on just before the Lyon youth squad’s goal.

Sampaoli introduced Guendouzi and Harit, potential starters on Thursday against Feyenoord, but OM seemed to already be thinking about the Conference League match. Bad Taste, uncontrollable throughout the match, assisted Dembele in the 0-2 and practically sentenced the match. Finally, when Marseille went all out on the attack, Toko-Ekambi took advantage of a great cross from Tete to give Sampaoli’s team a serious corrective.

See also  Budimir: "There we already got a point and now we play at home"