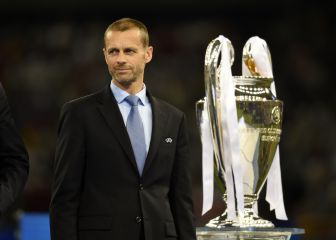 The president of UEFA, Alexander Ceferin, has spoken about the finals of the men’s and women’s Champions League, where two of the promoter clubs of the European Super League are present. Ceferin argued with the presence of both clubs the ‘cleaning’ of UEFA and its competitions.

“I have no problems with Real Madrid, of course, although I have no contact with the club’s management at the moment. But Real’s place in the Champions League final is proof of how clean UEFA competitions are. Real Madrid and Barcelona are in the men’s and women’s finals. No one has interfered otherwise“, Ceferin assured the slovenian portal 24ur.com.

Regarding the forecasts for the final between Real Madrid and Liverpool, Ceferin did not get wet when it came to giving a favorite, but when it came to giving his opinion on both teams. On the way in which Madrid arrives, he said that he was surprised by his classification against City but that, obviously, “he has nine lives”, like the felines: “In the semi-finals I doubted that Real could eliminate Manchester City, especially after the loss in the first game. But obviously they have nine lives like cats. It is an experienced team. In my opinion his defense is weak. It has the miraculous Karim Benzema, of whom I have said many times that, in my opinion, he is one of the most underrated players in the history of football. Luka Modric the older he is, the better he is. But Liverpool have younger players and they have very important experience in the final. I wouldn’t dare to predict the winner, as a general rule I misjudge. It will be an incredibly interesting final.”