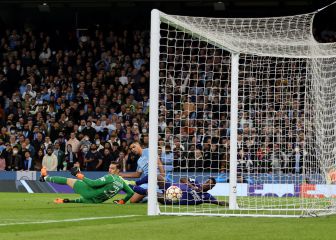 The Bernabéu has work, which is asked for a miracle per week. City takes Madrid to its territory, the wholesale comeback in a stadium where no one is free from being crushed. It was after a tremendous and unexpected duel, orphan of defenses, played with the outburst of a final, in which Madrid endured three protection accounts to finish on their feet. There are no Champions in the showcases without a bad time on the pitch. Ancelotti’s team already has three, but there is no one in the world capable of getting up so many times.

Not one step back. That’s what Guardiola and Ancelotti said to each other from the blackboard. The Catalan did the rest, with three points, the closest thing to a pure center forward (Gabriel Jesus) in the bow and De Bruyne and Bernardo Silva in the second line of combat. Guardiola’s Armada, read a banner. And that seemed like the quintet, an army. Ancelotti responded with Rodrygo, a 4-3-3 and the message that this was more about replying than resisting. More once seen the patches on the sides of the English team: Stones, a diminished center, and Zinchenko.

But before two minutes everything was a dead letter. The first one Mahrez took on the right took him around the area until he found, with his silken left foot, the arrival of De Bruyne from behind. The Belgian headed into the fields of nine. Finding the second-round finisher is one of City’s specialties. The goal was like a drop of water after another Havertz at Stamford Bridge.

Gabriel Jesus, in his garden

Unlike the gale that unleashes Liverpool, City is a Malaysian drop: high pressure, quick recovery, obsessive possession and waiting until the opportunity appears. Science and patience. Not even that had been put into practice when he found himself with a second goal as a gift. Kroos allowed De Bruyne a low cross on the edge of the area, Alaba gambled everything on the crazy anticipation card and Gabriel Jesus took advantage of the mistake. Of those of Varane lived two years ago.

Madrid was much earlier than expected in the worst possible scenario due to an unexpected defensive neglect, inappropriate at this stage of the competition: a midfield that did not press anything, two central defenders terrified by Gabriel Jesus, two permissive full-backs, a general faint in a team that boasts of defending sensibly and that did not commit their first foul until 40′.

Guardiola’s teams have a logic. The result changes little the plan. It is not in his spirit to retreat before the advantage, a principle disobeyed in the Wanda. In the end everyone wants to win. How long they take to add the in any way is what differentiates them from each other. This time Madrid changed the script, which in its attack of bullfighter shame for responding to that opened too many paths towards Courtois. In return, in his selective pressure at the exit of the ball from Ederson, Rúben Dias and Laporte, who don’t have an exquisite foot either, he found some opportunities. In that shirtless game more chickens came out than entered: A header from Alaba was insignificant before the misses by Mahrez and Foden. It was time to cry for Casemiro, the patrolman who is attentive to these things.

And so, walking on the coals, Benzema scored. The goal summed up the season in five seconds: Modric recovered a ball with the ferocity of a youth and the Frenchman finished off a center from Mendy first off the post. He hasn’t missed one in a long time. Madrid saved the first match-ball of a duel out of control, exactly what no one expected. The goal coincided with the withdrawal of Stones, who entered touched and left in relapse. Vinicius’ brown fell to a legionnaire: Fernandinho. History repeated itself in Madrid: Alaba, greatly diminished, did not return in the second half, which started like the first. A miscalculation by Militao left a free field for Mahrez, who crashed his shot into the post. Carvajal saved Foden’s second attempt, which he would not forgive shortly after in a sweet cross from Fernandinho. His shot at his pleasure explained well how he defended (?) Madrid outside and inside his area.

It saved him that the City was in the same. to the celebration sky blue followed a fantastic maneuver of Vinicius, who with a feint from behind got rid of Fernandinho in midfield. No one could catch him afterwards. That spark did not stop until he left the ball in Ederson’s net. There is no more intrepid player in the tie.

The game was out of its mind, as if there was no return. A final in the semi-final, with Madrid, now yes, in an eye for an eye and a tooth for a tooth, always through the same channel: Modric-Vinicius-Benzema. And in those came the 4-2, in a comic play. Kroos brought down Zinchenko, Madrid was paralyzed because Kovacs put the whistle to his mouth to signal the foul but did not and Bernardo Silva shot Courtois. And comedy by comedy, Laporte immediately gave away a penalty in a fry hand and Benzema transformed it to Panenka. The ultimate trick. Now it’s up to the Bernabéu, who perceives City as a Barça in exile. One more argument to stir the hornet’s nest.