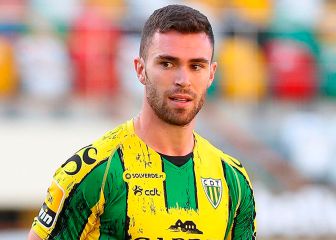 The Jambor National Stadium, located in Oeiras, just over 20 kilometers from Lisbon, will host next Sunday one of the most unequal Cup finals of the course in Europe. Porto, league champion, will seek the double against Tondela, who will debut in a match for the title after completing their relegation to Second. The club chaired by the Spanish David Belenguer He is 90 minutes away from turning a bad season into the best in his history: if he wins the Taça de Portugal, he will play in the next edition of the UEFA Europa League. And yes, he will play in Second. “Just as in the league we deserved to go down, if we play in Europe it will be because we have earned it. It would be as strange as it is deserved”, he discovers Manuel Hernando (Palencia, 1998), one of the three Spanish soccer players of the Tondela -Iker Undabarrena and Javier Avilés accompany him-. The man from Palencia attends AS as “fucked up” as he is “excited”: “It’s a strange situation, but a Cup final is something that everyone can’t experience. We’ll try to bring joy to the fans and our families, who have suffered a lot with us this season.

“When the referee blew the final whistle I had very strange sensations. I thought: ‘At what point have we gotten into this hole?'”

Tondela reached the last day of the league depending on himself not to fall to one of the two places of direct relegation. The ‘crocodiles’ faced Boavista and did their homework well until the 87th minute, when a goal by Yusupha Njie shattered their permanence options. “Things didn’t go as we expected. We competed well, but we thought it would be easier because the rival didn’t play anything. When the referee blew the final whistle I had very strange sensations. I didn’t believe what was happening. I thought: ‘At what point did we get into this hole?’ We are very sad, but it is what it is. Soccer is like that. we have to follow“, discovers a Hernando who was told “wonders” of Portuguese football: “I expected there to be a lot of competition, but not so much. It is true that there is a lot of difference between the greats and the rest, but it is nice to be able to compete against them and visit their stadiums. It’s a good place to take a step forward, progress and learn”. The man from Palencia arrived after suffering a serious ligament injury, but that hasn’t stopped him from competing at a high level this season: “I’ve settled well in the team and I’ve been able to score five goals. The relegation thing is a shame, now we have to win the Cup to give joy to all the fans”.

Manu Hernando is only 23 years old, but he has already seen them in all colors. He went through the quarry real Madrid, although he was always very clear about how difficult it would be to succeed dressed in white. “While you’re still there, you prepare for the day you have to leave because it’s inevitable. I knew I’d have to make my way out. I hope I can come back one day. I know it’s almost impossible, but hey, I keep progressing and improving”, discover already with “charged batteries” to face Porto: “They are the league champions and have competed very well in Europe. It’s going to be a very difficult match, but in a final anything is possible. We know how to hurt them“. The man from Palencia gives “a 50% chance to each team”: “We are going to run a lot from side to side, but we are going to be together and wait for our opportunity. We have to know how to suffer, be a team and plug what we have”. Manu Hernando is not afraid of any Porto player, but if he had to eliminate a rival player “I would choose Taremi”: “He has half a chance and scores two goals for you . In the first leg he scored three for us and in the second leg he scored another. If you give him half a meter he messes you up”. Luckily, Luis Díaz left for Liverpool in January: “I suffered in the league and he is one of those footballers who goes on, goes on, goes on and goes on. He doesn’t give you a minute of rest and being able to control him is very, very difficult.”