Control Center has been a staple feature of iOS and iPadOS for many years. This module is to be unfolded from the upper right corner of the screen downwards, on iPhone with Face ID and iPadOS, or from the bottom of the screen upwards on iPhone with Touch ID. It contains many controls, Wi-Fi, Bluetooth, audio playback, etc. and is even accessible from the locked screen.

In short, if you have had an iPhone or iPad for some time, you know it well. But did you know that it can be customized to your liking in the system settings and that it has “hidden” shortcuts? Let’s discover together all the secrets of the iOS and iPadOS control center, always more provided year after year.

First of all, by way of introduction, here is the evolution of the control center since iOS 7:

The latest version has the advantage of compactness, but also of being able to be organized according to one’s preferences.

How to organize your control center?

Beyond its aesthetic aspect, and as seen in a previous article which indicated how to take advantage of the screen recording function, the control center can be adjusted in the settings. The user can choose to add various buttons, sometimes very practical, the Apple TV control for example.

Everything happens in Settings > Control Center. 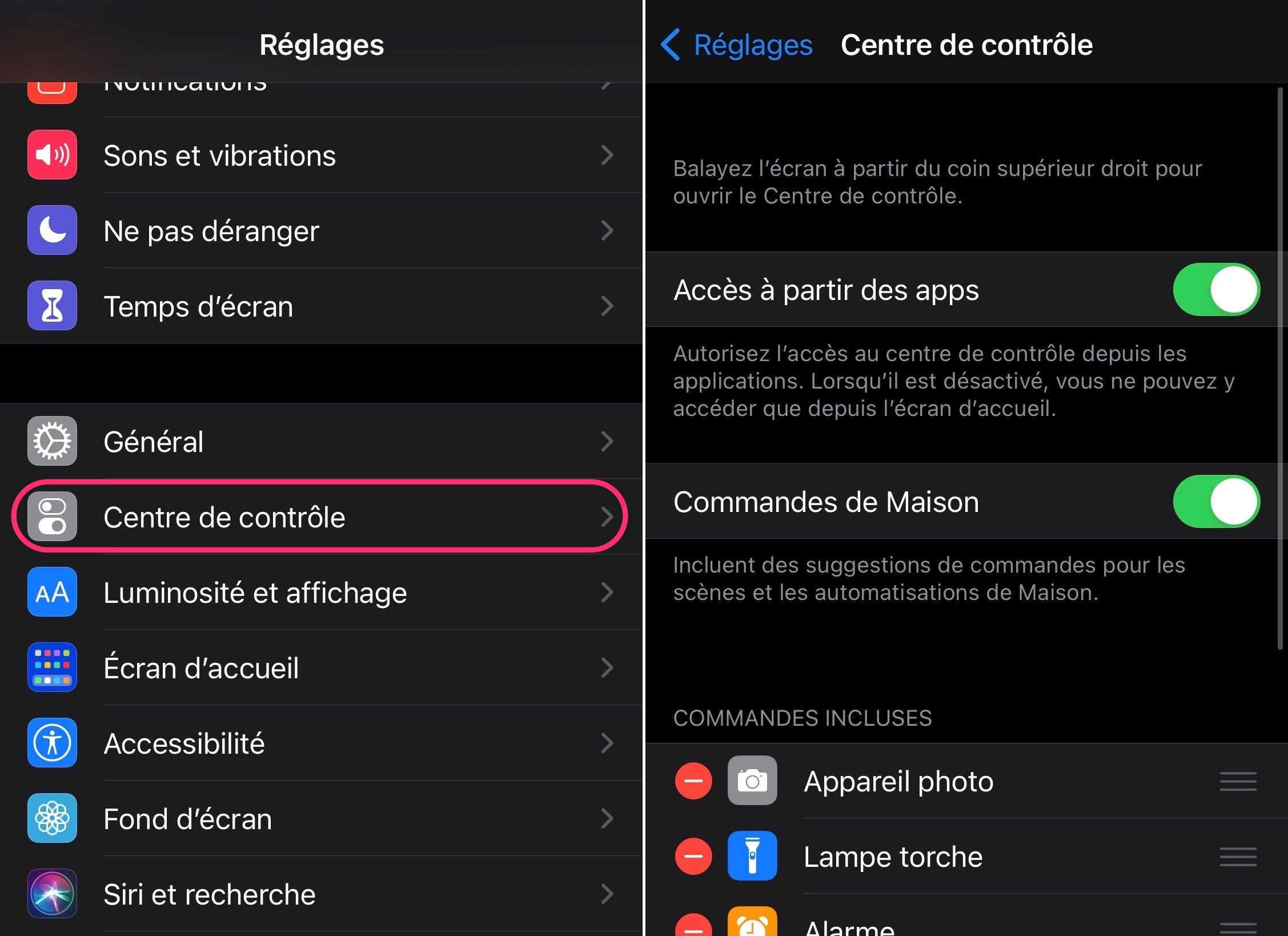 At the top of the page are two settings to make small adjustments. 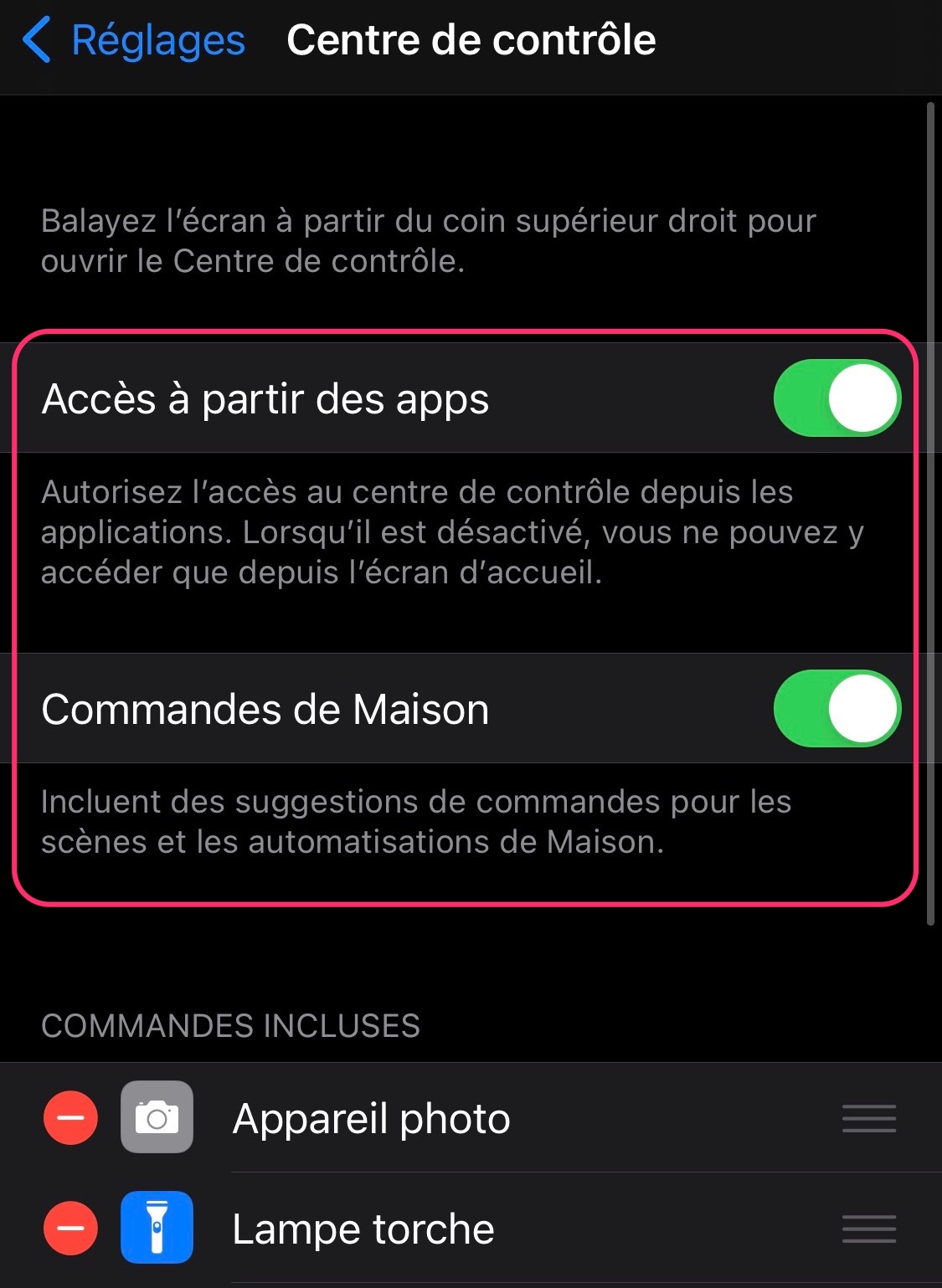 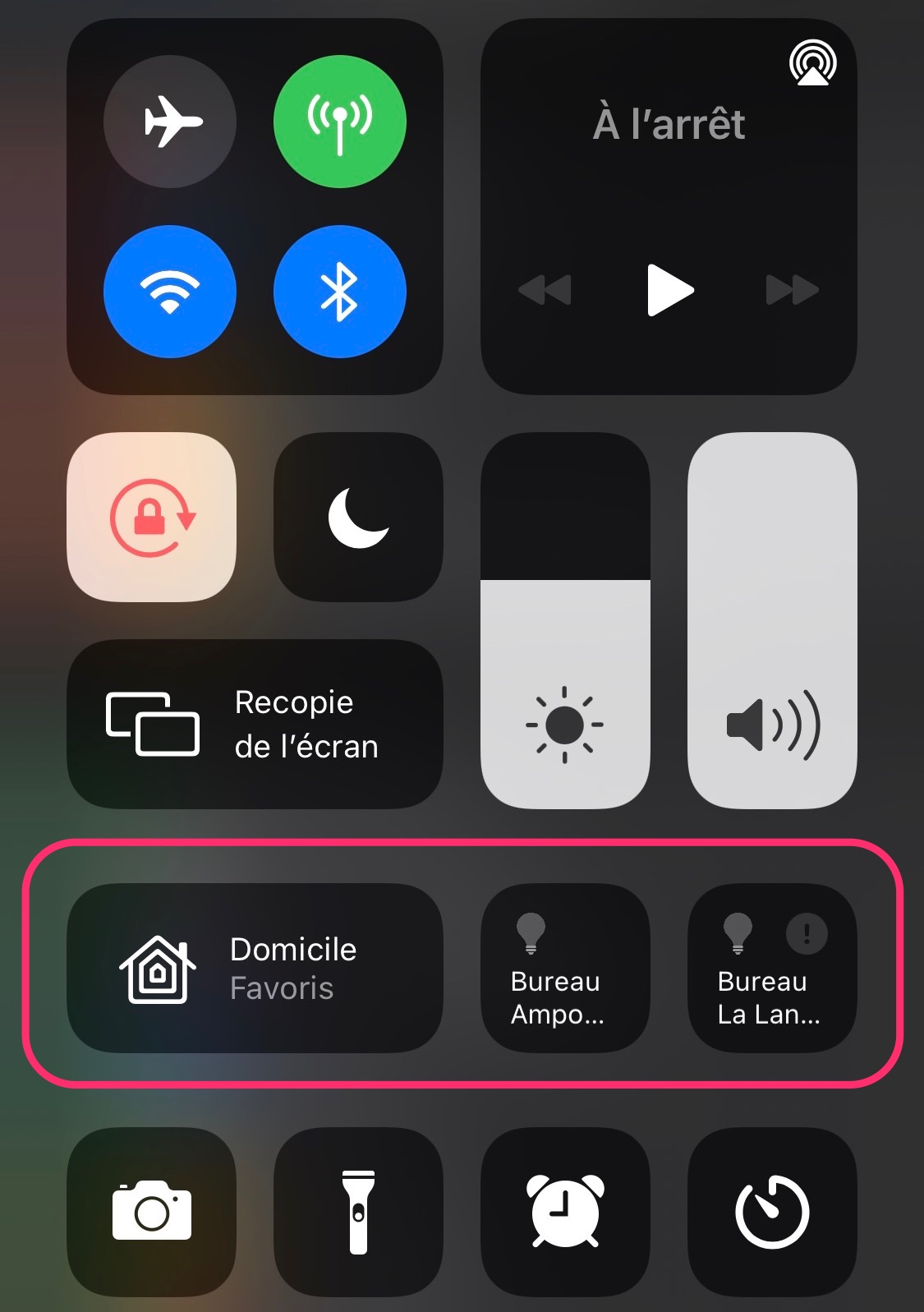 always in Settings > Control Centeryou can manage which orders will end up in the control center or not. 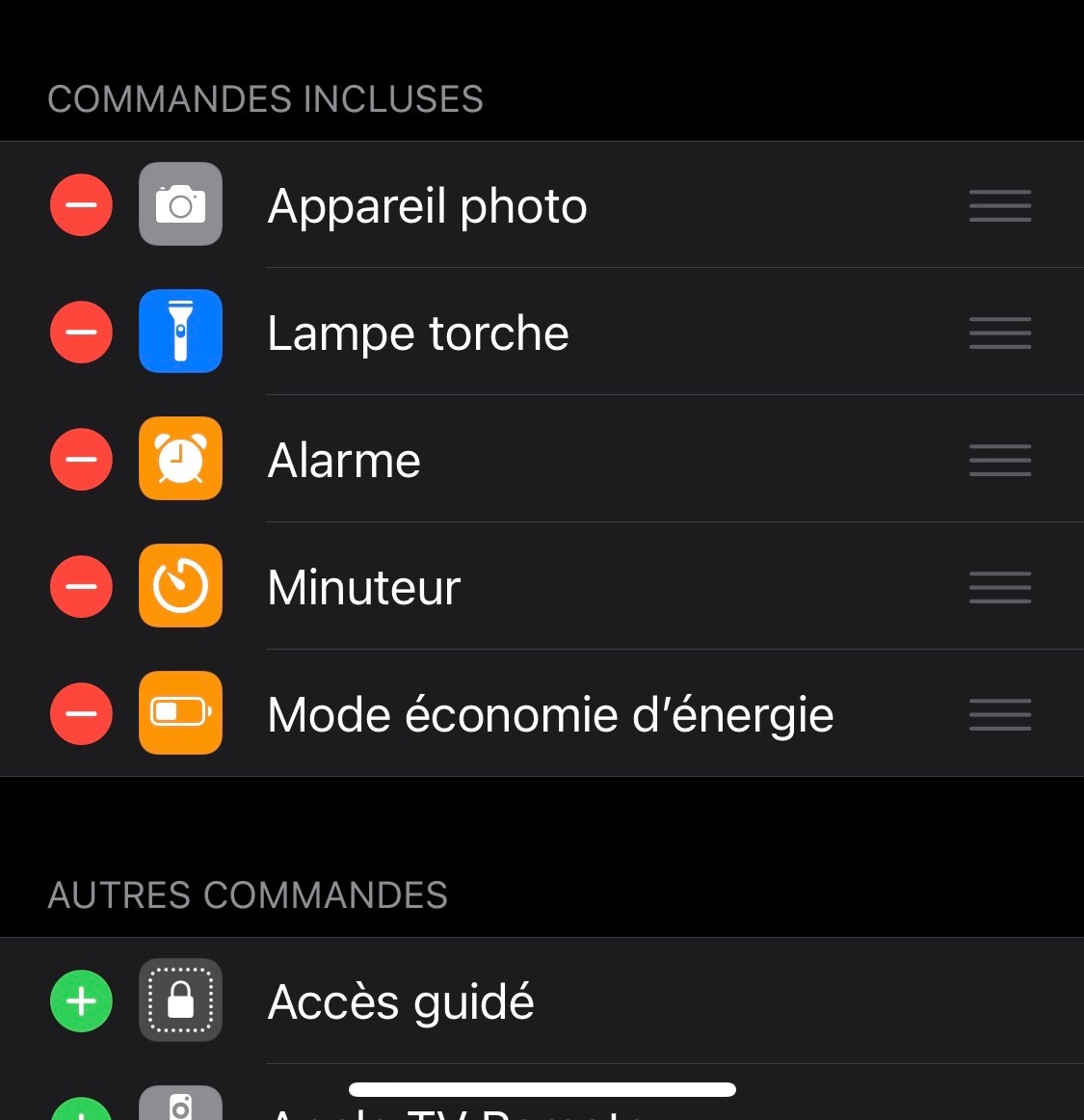 These have fairly clear names, corresponding to the functions concerned: Torch, Stopwatch, Dictaphone, Accessibility shortcuts, Calculator, Energy saving mode, Text size, Alarm, Notes, etc. There are more than twenty of them, which can therefore be included, or not, in the control center.

Here’s how to handle them: 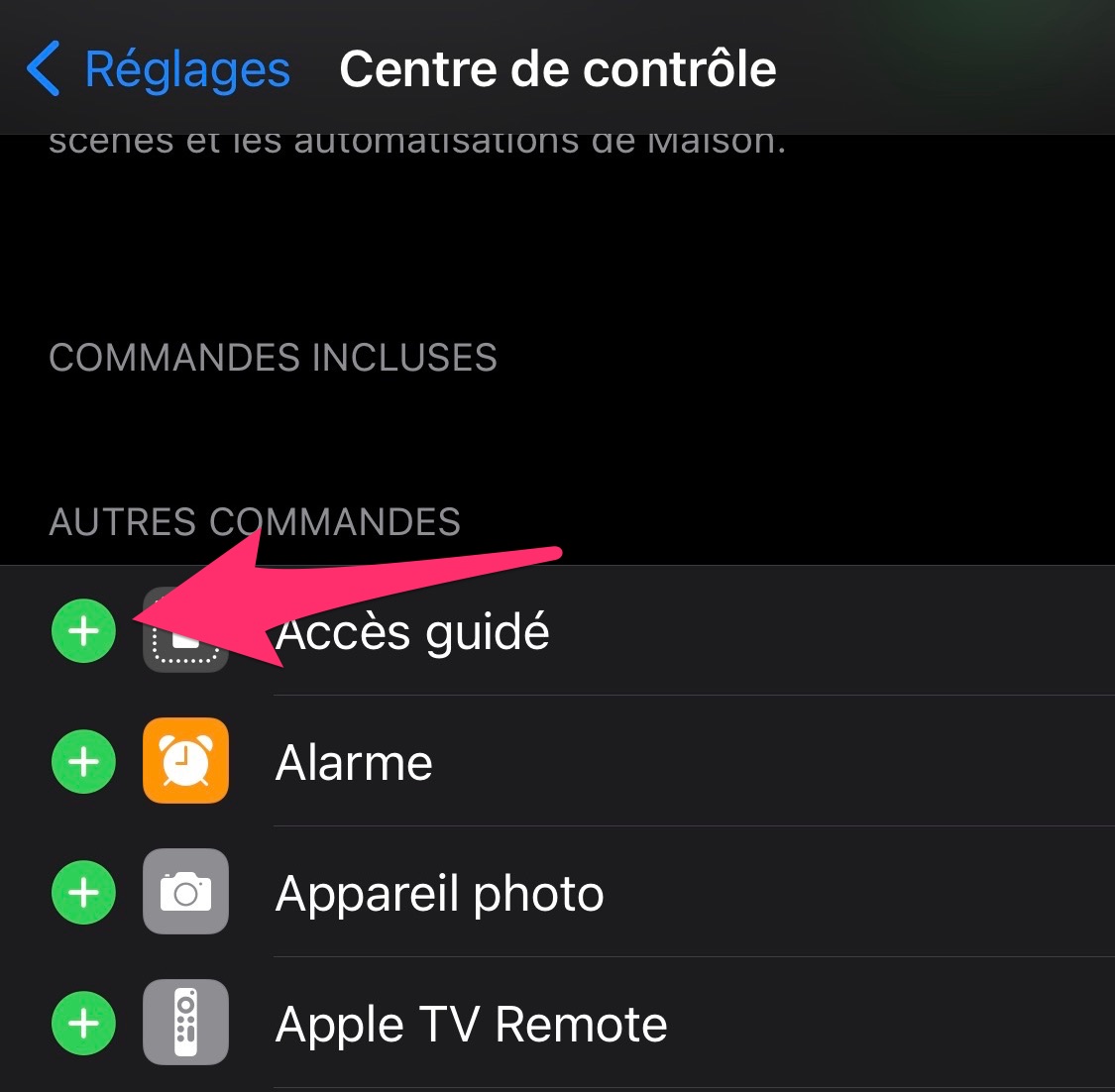 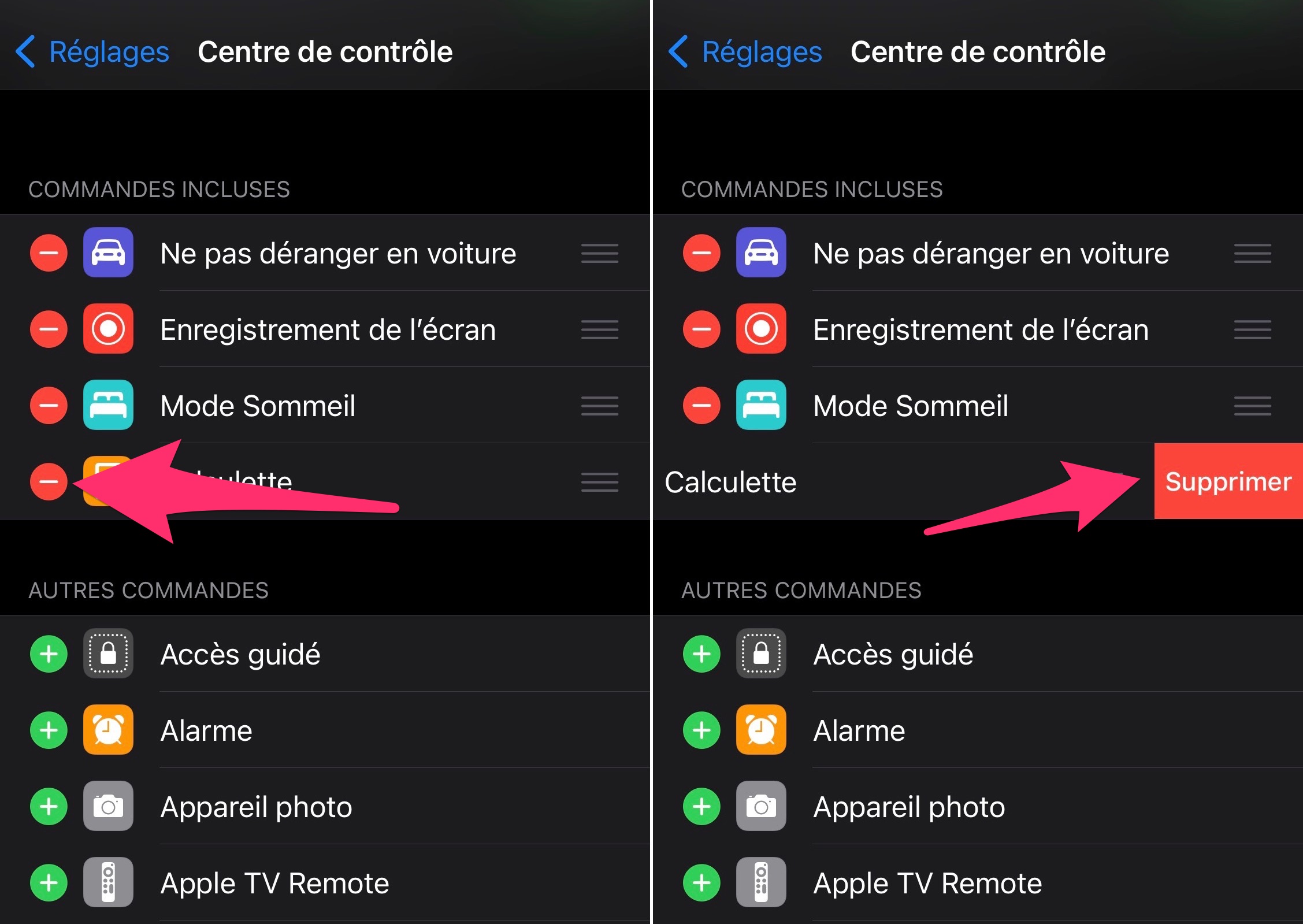 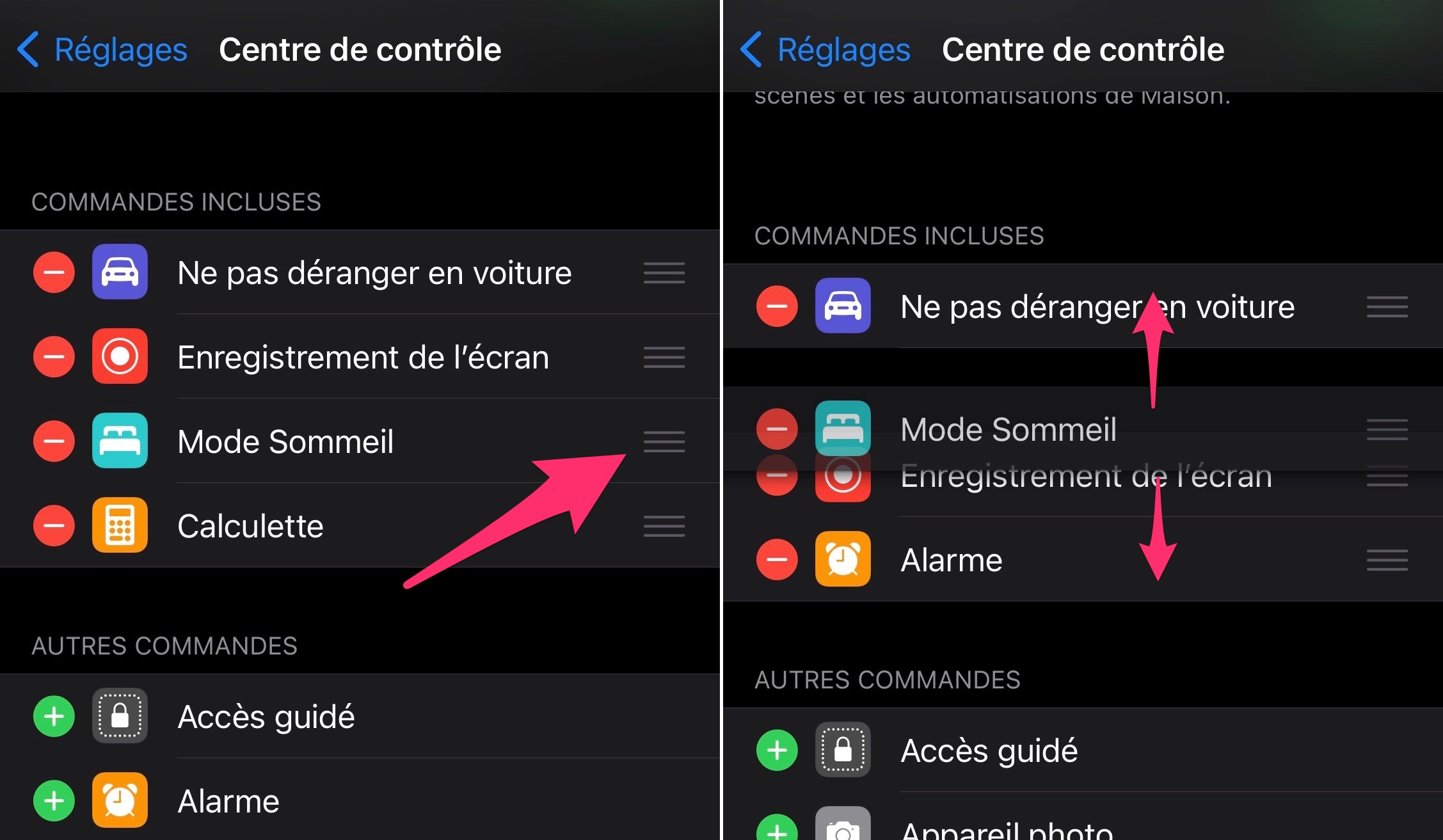 Note that these additional commands are added only in the lower part of the control center, the first part is fixed and cannot be modified. This includes network settings, brightness, airplane mode among others. 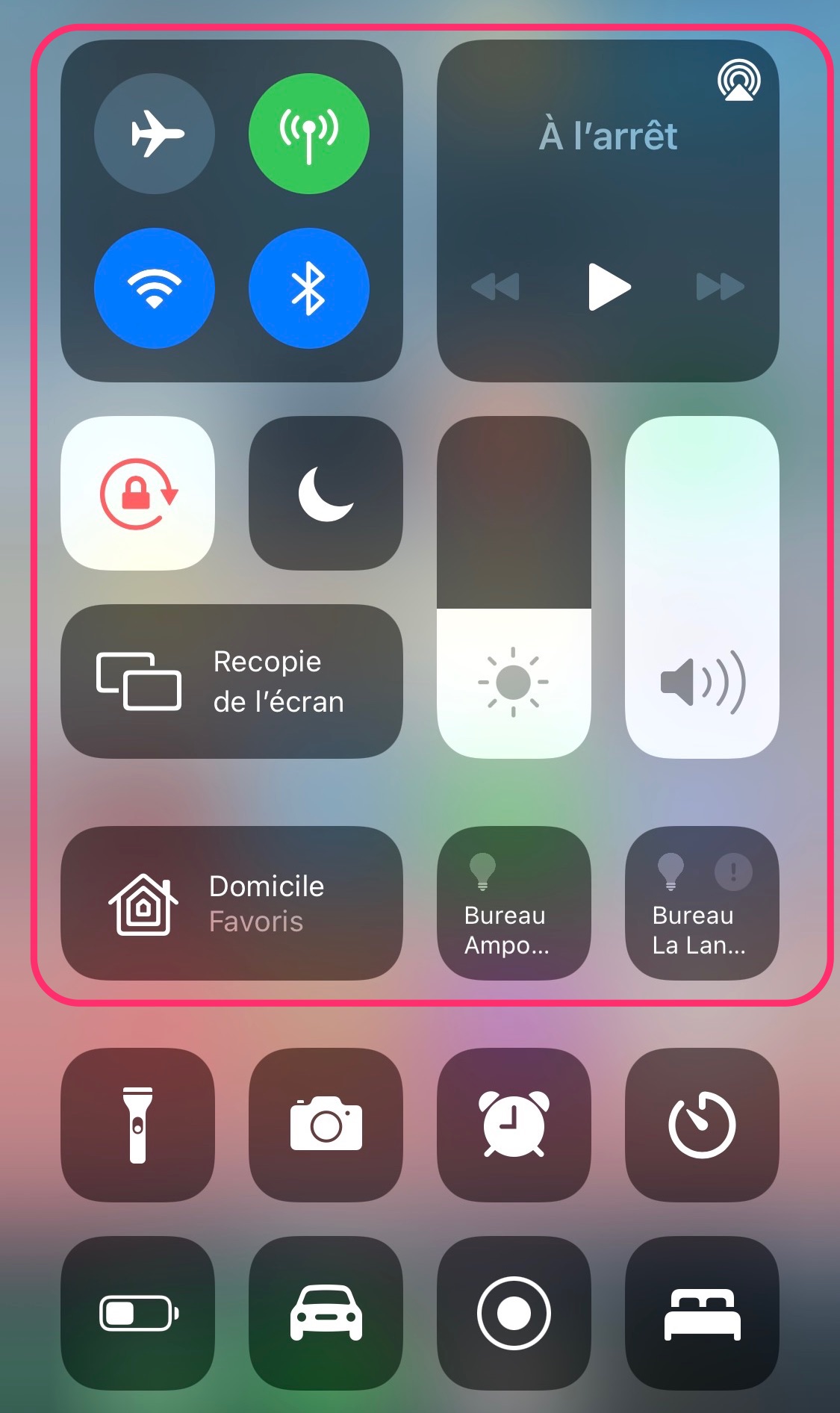 The control center can contain only this upper part, without shortcuts in the second part. 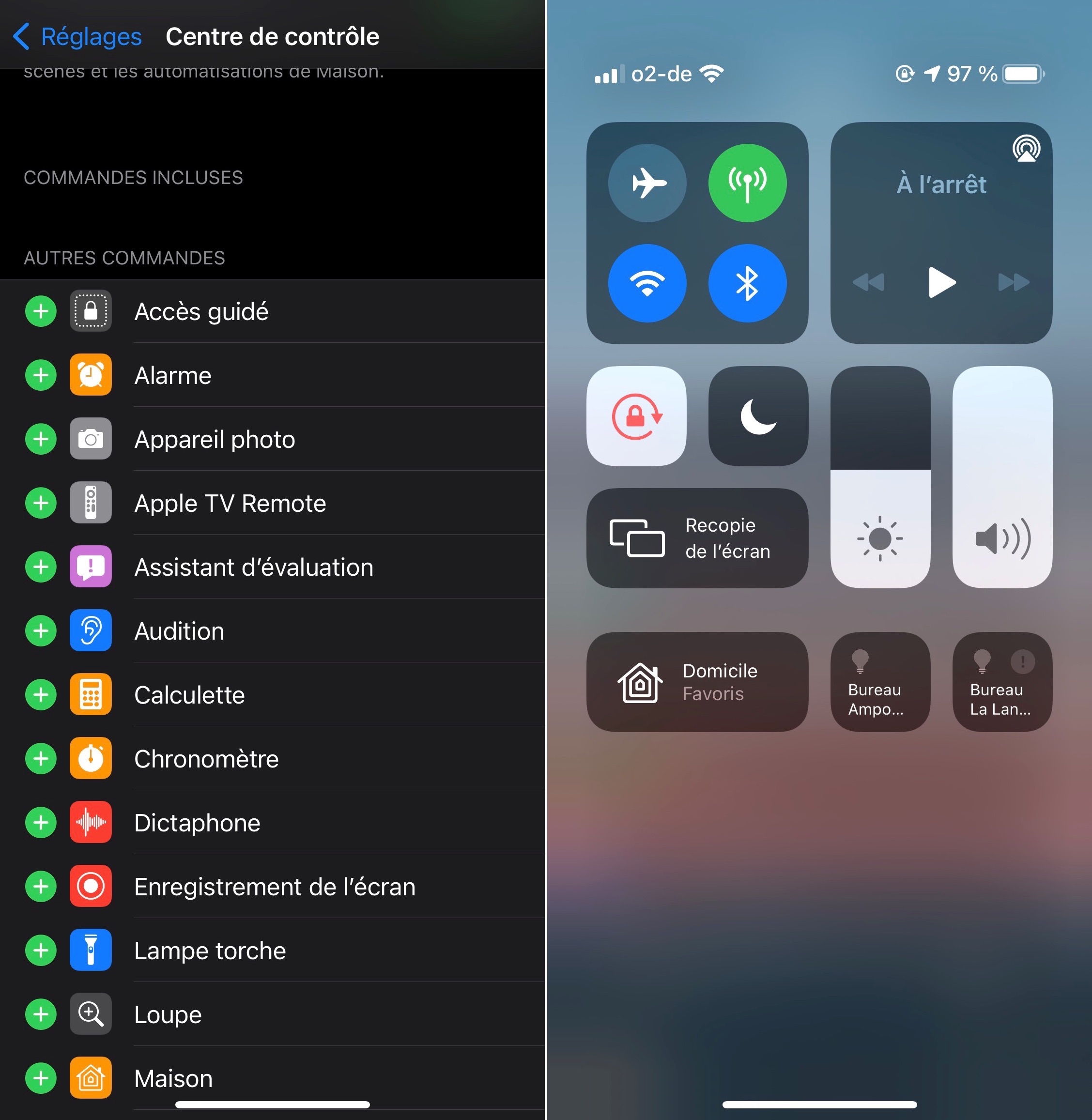 Or, for the greediest, include all the shortcuts from the list of optional parameters. 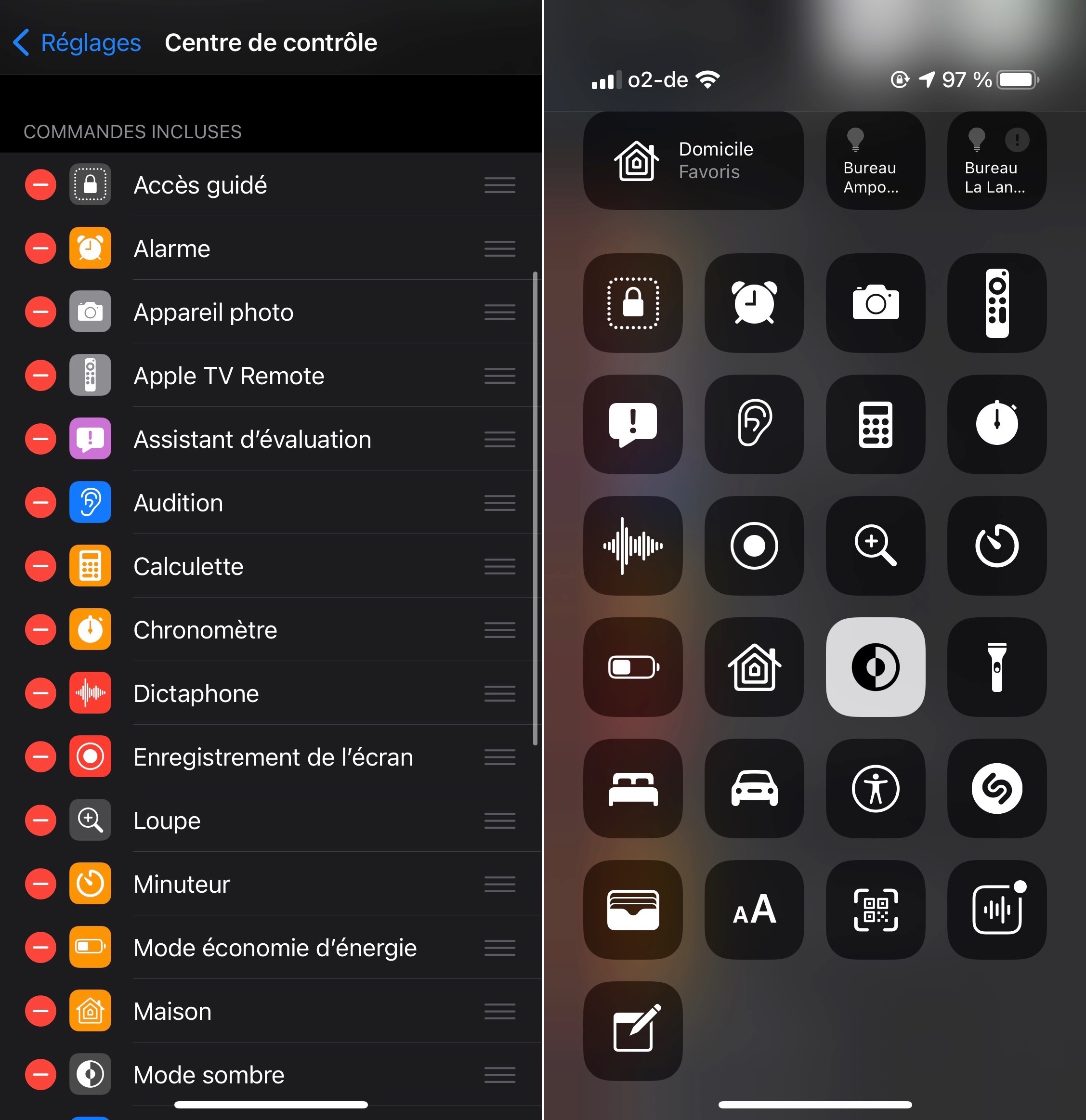 It is worth noting that many of the Control Center options have a 3D Touch access. This then gives access to additional settings. iPhones without this screen technology can also take advantage of it by performing a long press on one of the controls. This usually brings up a new window with different setting choices. For example, in the case of connection options, a new window indicates additional settings for AirDrop management and Hotspot. Another example, for the timer, a new bar allows you to set the time more precisely. 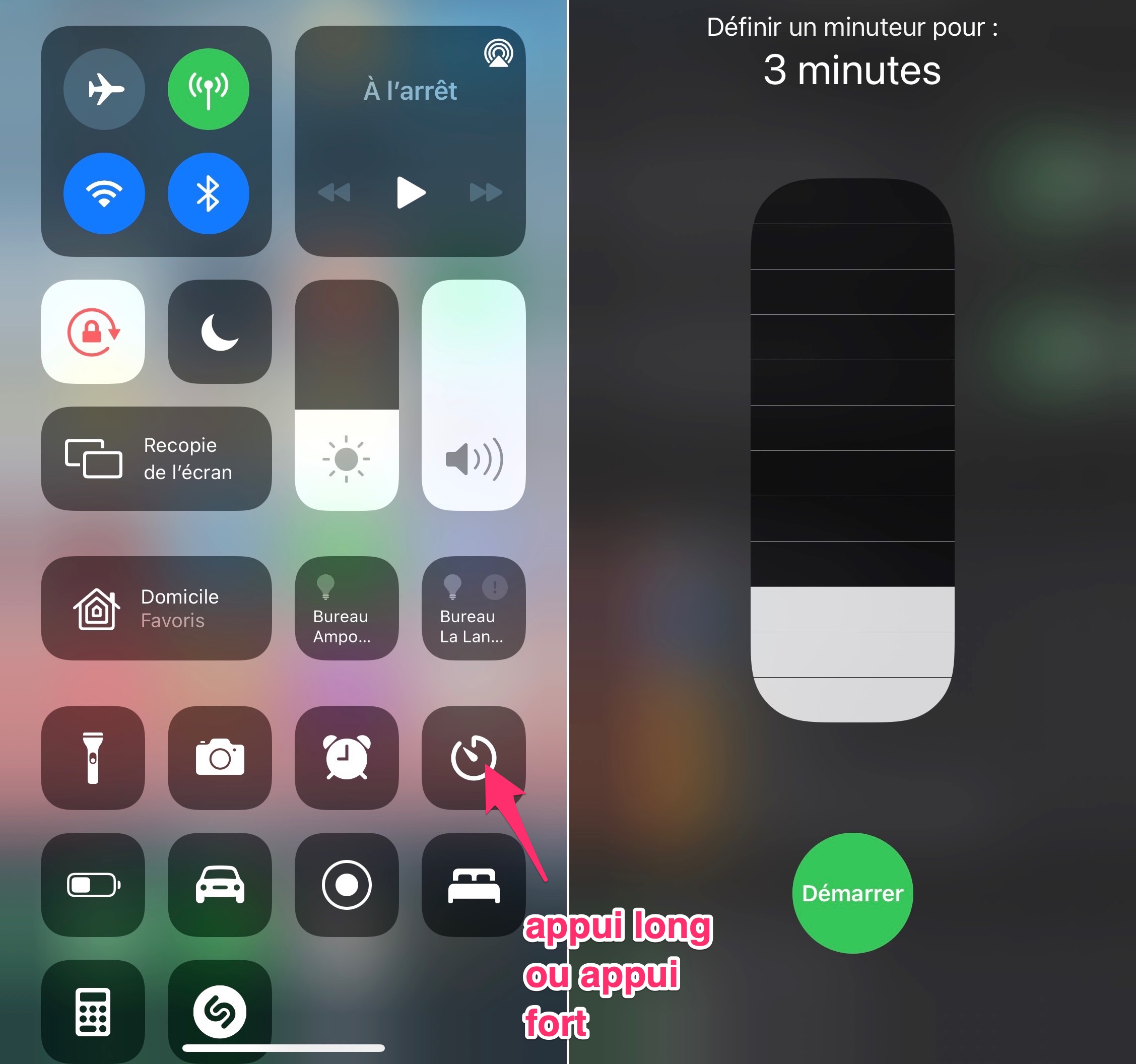 The special case of Wi-Fi and Bluetooth

Finally, we note a very specific point, it concerns the deactivation of Bluetooth and Wi-Fi. The subject has raised a lot of questions, because Apple has changed the way buttons work with iOS 11. Indeed, we mentioned it more in detail here, disable Wi-Fi and Bluetooth via the buttons in the control center or by switching to airplane mode does not actually stop both connections. Wi-Fi and Bluetooth remain active to a certain extent, to support the proper functioning of services such as Locate, AirDrop, AirPlay, connection sharing, or even a connection with an Apple Pencil or an Apple Watch. However, it remains possible to completely disable Wi-Fi and Bluetooth through the Settings app for users who wish, or by taking advantage of a suitable shortcut, or by asking Siri.

That’s it, you now know a lot more about the control center.