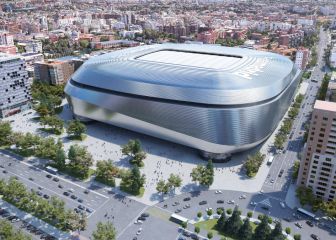 Millionaire agreement reached by Real Madrid. A step forward in the conversion of the New Santiago Bernabéu into a unique space. The intention is clear, the white coliseum must be a benchmark not only in football, but in the world of leisure Worldwide. For this reason, they closed this Wednesday a collaboration with ‘Legends’, a master company in the “management of stadiums and Premium experiences for sports organizations and organization of major events”, as stated on the white team’s website. The company is owned by the Sixth Street investment fund.

We are talking about an agreement that will bring an extra 360 million euros to Madrid, an amount that may be invested in the activity that the club considers appropriate. See the payment of salary or undertake new signings. The timing It is perfect, since the end of the Mbappé soap opera is patiently awaited. A final decision that, as this newspaper revealed, will not be announced until after the Champions League final. In all likelihood, the destination of the still crack PSG will be Madrid and this powerful economic injection could be used to help pay for the operation. Although Bondy’s would come for free, his salary will place him as the best paid in the history of Madrid and it will be necessary to assume a forceful transfer premium of about 100 million.

“Through this alliance, Sixth Street acquires the right to participate in the operation of certain new businesses in the Santiago Bernabéu stadium for a period of twenty years. Likewise, Legends will contribute its experience and knowledge in the operation of large stadiums and leisure centers, allowing optimization of the management of the Santiago Bernabéu stadium”, adds Madrid on its website. In this way, the company reserves a part of the profits obtained by the initiatives that it helps to launch.

Legends is a leader in the industry and has a lot of experience in powerful projects. It has also worked to boost the income of other large stadiums such as the Camp Nou or the Wanda, in our country; the Tottenham Hotspur Stadium and the Etihad, in England; or the Yankee Stadium and the At&T Stadium of the Dallas Cowboys of the NFL. However, the reformed Santiago Bernabéu will be an even greater challenge, since the work will allow organizing multiple events throughout the year.

Likewise, it represents an important income if it wanted to be used to pay for the stadium itself. The titanic work will have a total cost of 796.5 million euros. They are the result of the credit of 575 million requested for its financing plus the interest corresponding to the fixed interest of 2.5 percent, in a period of 30 years, agreed at the time. That is to say, it is a contribution of 45.2 percent of the amount that would go to the remodeling. The total coverage of the new white coliseum and its innovative retractable grass will be the great hallmarks of the stadium and, in addition, the details that will allow daily events to be held as planned.