When we speak of the Montessori school and more particularly of kindergarten montessori, we sometimes imagine a classroom with wooden equipment and crockery, but without knowing what its operation actually consists of. So what are the differences between kindergarten Montessori and public school ? How are their practices so opposite? It is good to take into account the pedagogy, the posture of the adult and even the schedule of the day to compare. To better understand, let’s study the essential differences between the two educational systems. 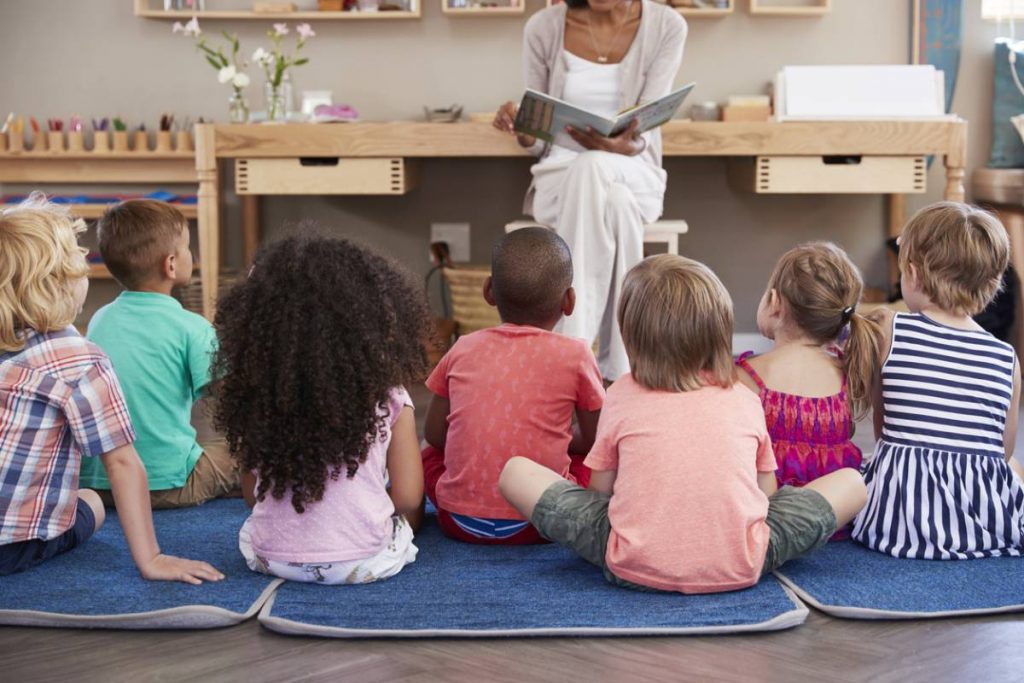 The main difference between Montessori kindergarten and public school: individualization

The main difference between Montessori kindergarten and public school is the place given to individualization.

In classical kindergarten, the operation by rotating workshops is the most widespread with regard to the time devoted to so-called school activities. Students are dispatched into groups, usually 5 to 8 students, depending on class size. Usually, the organization is as follows: a first group is positioned with the teacher for a fairly guided activity (mathematical notion, writing, etc.). A second is with the ATSEM (Specialized Territorial Agent for Nursery Schools) if the class has one, for a supervised activity. The others are independently occupied with activities that can be done without the support of an adult.

Overall, within a workshop, the children must all achieve the same objective and work on the same concept simultaneously.

In Montessori, the operation is quite different. Children are guided to individual activities according to their level of skills and their appetite for each area of ​​learning.

See also  slow down to be happier with your family

Unlike working in rotating workshops, it is not possible to compare yourself to other students or even to copy. Indeed, the activities are present in a single copy in the Montessori classroom. Clearly, a child can work on mathematical notions while his neighbor leads a vocabulary workshop.

In sum, the learning model is collective in the public while it is individualized in Montessori kindergarten.

Classical school VS Montessori school: which school to choose? By Horizon Family

Operation by individual workshops of Montessori kindergartens offer more flexibility in the development of the plan. It doesn’t matter if one student works on sizes for 10 minutes while their neighbor concentrates on fine motor skills for 35 minutes. Here, we are not “blocked” by the need to rotate the workshops between each group of students. In addition to this, the time slots dedicated to individual workshops are quite long in Montessori (between 1h30 and 3h in a row) and allow everyone to experiment with several activities.

In contrast, in the public, the schedule can be more rigid in the sense that the collective functioning obliges to delimit a working time for each activity in order to carry out the bearings.

The other essential point allowing differentiate kindergarten Montessori and public school depends on the way of constituting the classes. In public schools, there are very small, small, medium and large sections, from around 2 years old to 6 years old. In Montessori we will have the Nido (from baby up to 2 years old) which is the equivalent of the crèche where the children are grouped according to their level of autonomy and the slice 3-6 years old.

See also  the real causes of your uncontrolled anger

In standard kindergarten, children are therefore differentiated by level, even if it is not uncommon to find multi-level classes, especially in small towns. It also depends on whether or not it is possible to assign an ATSEM to several classes, depending on the city’s budget. The students are therefore evaluated according to the expectations of their level and the expectations of the end of the cycle and the program is established by class level.

In Montessori class, children are grouped by age and not by level. Thus, there is no question of repetition or activity depending on the level of class. This gives the possibility to children who need time to be able to progress without having to compare themselves to peers of the same age, while the most comfortable can progress without waiting for the passage to the next class. The multi-age class finally allows to adapt more easily to the rhythm of each one. The evaluation is done throughout the school career according to the expectations of the age group.

The posture of the adult is very different in the Montessori school compared to the classical school. One is a guide while the other is a master, but in both cases the adult represents authority.

In classical school, the adult is the “teacher”, in other words it is he who directs the class and dictates the program of activities as well as their progress. The day will revolve around a schedule of activities which will follow one another according to the methods envisaged by the teacher. This allows for a clear and structured framework, but it also leaves less room for experimentation and assertiveness for the students.

See also  I exploded...I screamed at my daughter!

In Montessori school, we will rather speak of “educator”. Its role is to get the children active, because contrary to popular belief, there is no child king or place for idleness, even in kindergarten. We respect the times of rest and observation of the activity of others, but above all we seek to raise the children’s skills.

Once an individual workshop has been presented to a child and the process is understood, he can carry it out independently. When a child is active, the educator places himself in observer posture not “master”. He only intervenes if the child asks for help or if he makes dangerous or inappropriate use of the equipment. He is more of a guide.

The cost of Montessori kindergarten compared to public school

The last point that we will address is also the most delicate since it is a question of money! Let’s be clear, except for the purchase of school supplies and participation in outings, the cost of public school is relatively controlled. We are not talking here about extracurricular activities or the canteen, simply the time devoted to the instruction of children.

On the other hand, the price of a Montessori kindergarten is quite high. It is necessary to count about 500 euros per month on averagewhich is a big deal, let’s face it.

To find out if Montessori kindergarten is the best choice over public school, see if the financial effort it requires is bearable for you and if it is what your child needs. Do not hesitate to contact a Montessori school, especially since many offer open doors. This can be an opportunity to learn more about how they work and to see the concrete benefits envisaged for your child.