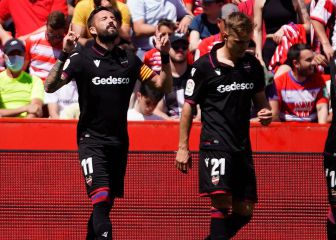 The ‘Comandante’ Morales does believe in the salvation of Levante. Create and pull your team to get yours out of the red lantern and leave permanence to only four points. In addition to getting Granada into serious trouble. The Nasrids are only one point away from relegation with a visit to the Metropolitano on the horizon that could put them in the red zone. It was a final for both and it was the Granotas who took the three points to continue clinging to the First Division.

The game started very evenly. With intensity and arrivals, open and fun. Levante was looking for speed, Granada put a lot of intensity into it and have the ball. The first was for Morales in a free kick in the front that Maximiano stopped, Machís responded with a center that ended in a corner. Although the Nasrids had drive, between Morales and Dani Gómez they were making a break to the defense of three of the Torrecilla team. Quini was providential with Son and then with Morales in the umpteenth defensive mess for the rojiblancos. The defense was a local flan and, despite this, in attack things were seen in attack. Molina tested Cárdenas in the best Nasrid minutes, who also had a shot from Escudero that narrowly missed. And, at 17′, the first lunge came. A long ball for Morales that caused all the trouble for Víctor Díaz, he put the ball between Germán’s legs and assisted so that Dani Gómez made it 0-1. A goal of hope. A goal with a taste of salvation. The ghosts were returning to Los Cármenes and the team noticed. Another counter ended with another shot by Dani Gómez that Maximiano blocked and Morales sent out another one-on-one. The best of a Granada that was on the canvas went to Escudero, but his direct free kick hit the crossbar. The best news for the locals was that they only lost by one, the worst news for the visitors was that they had not sentenced the duel…

After the restart, Torrecilla changed the system to 4-4-2 with the entry of Collado and Granada improved. It had another air. And she believed in the epic. Molina tried it from outside the area with a shot that Cárdenas took. With drive and heart he sought to turn the score around or, at least, match it as he already did against Rayo. Arrivals, set pieces and a lot of desire, but football was still lacking against Levante with very clear ideas. Morales had it again, which was a real nightmare for the local defense, but his cross was saved by Maximiano and the game continued. In fact, it ended in a corner in the other goal with the Commander still lying on the pitch. And the controversy came. Pizarro Gómez stopped the game and from the VAR they called him to see the play in which Morales receives a blow from Germán when he crosses. The referee decreed a penalty and a second yellow for the center-back. Even more difficult for the Nasrids who were left with one less and saw how Morales did not fail from eleven meters to put the second grain. Everything was going well for Levante, but Granada did not give up. In fact, Molina had two options and a very protested almost penalty by the striker. Montoro met Cárdenas and on the counter, Morales assisted Malsa to equalize the particular goalaverage and dampen local spirits. The public left the stadium amid protests from their players, who were more focused on the referee than anything else. Granada did not get anything and that they kept trying with the occasional occasion. And the goal came through Collado, after bouncing off a defender, to at least have goal average. The joy did not last long because before the end Soldier made the fourth granota after a save by Maximiano. But the three points were already on their way to Valencia. Final and resounding whistle from the few fans who were still in Los Cármenes, on the other side of the coin, a party for a Levante that maintains its permanence options.

A resurrection Sunday of Levante. Alessio’s team grabs Primera and cIt greatly complicates a Granada that chokes on their home games. They have not won at their stadium since 2021 and have only won one of the last thirteen games. Everything is compressed below and, although the Nasrids will not end this day in decline, their mattress could be left at zero…