The new 2021 Ford F-150 Raptor it is already a reality. The third generation of the savage pick up The Blue Oval is more capable and technological than its predecessor, but also more efficient thanks to its updated 3.5-liter biturbo Ecoboost V6 engine. And be careful, because in 2022 we will also see a Raptor R with V8 engine to planar facing the RAM 1500 TRX.

Almost certainly, the future Raptor R will hide in its guts the supercharged Predator V8 of the 760-hp Mustang Shelby GT500, displaying an even more radical aesthetic than the newly released Raptor, which is once again take inspiration from fighter jets to make your presence instantly recognizable. 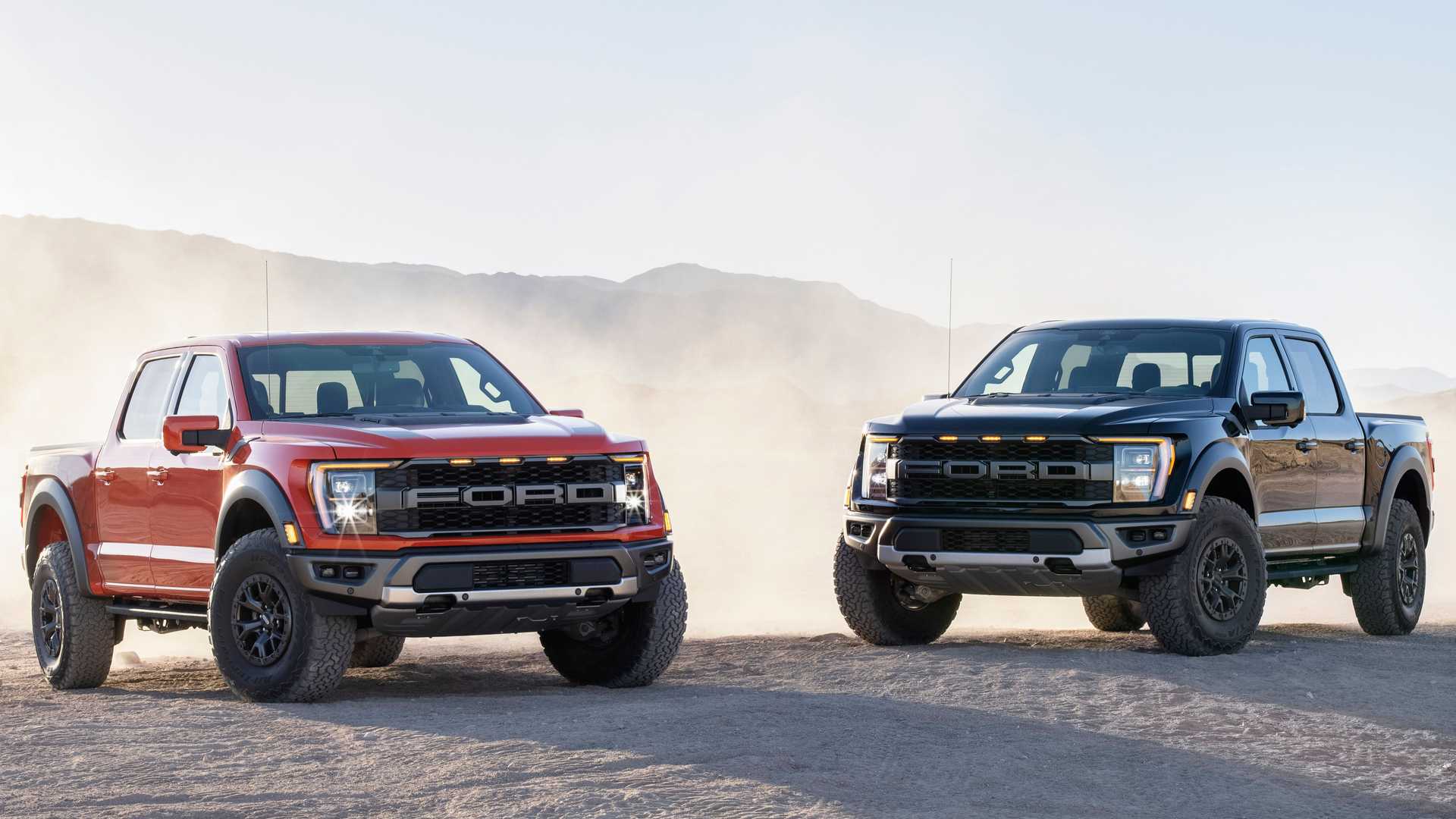 Key features include the hood with a reworked air intake, which complements the functional side vents in the upper part of the front fenders; the widened body panels, the darkened grille, the new headlights and a redesigned and darkened rear lights.

The bumpers are now made of stronger steel and have been slightly modified, while we can see two prominent dual exhaust tips at the rear. These are part of a all-new active exhaust system which produces a more throaty soundtrack, especially in the modes Sport Y Low. 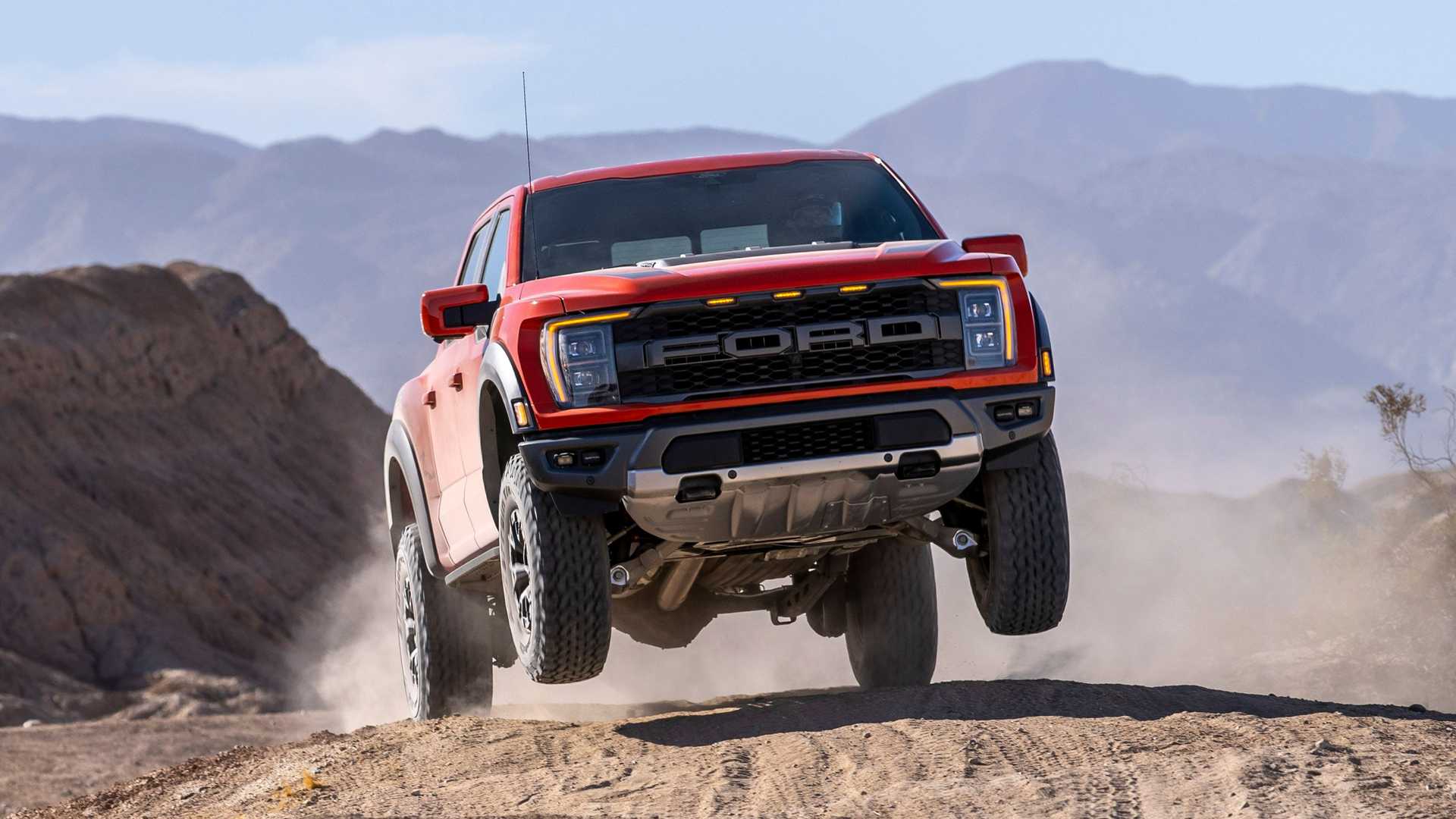 Ford has announced that there will be no big news under the hood, so the F-150 Raptor will maintain its power of 450 hp (331 kW) at 5,000 rpm and 690 Nm of maximum torque from 2,500 rpm. An electronic locking rear differential will be standard, with a Torsen limited-slip front differential offered as an option.

The North American company points out that this is the third generation Ecoboost V6 biturbo, which features state-of-the-art turbochargers and a 10.5: 1 compression ratio, as well as new high-power fans for cooling. Also, the fuel tank is now 136 liters, which gives it an autonomy of about 800 km. 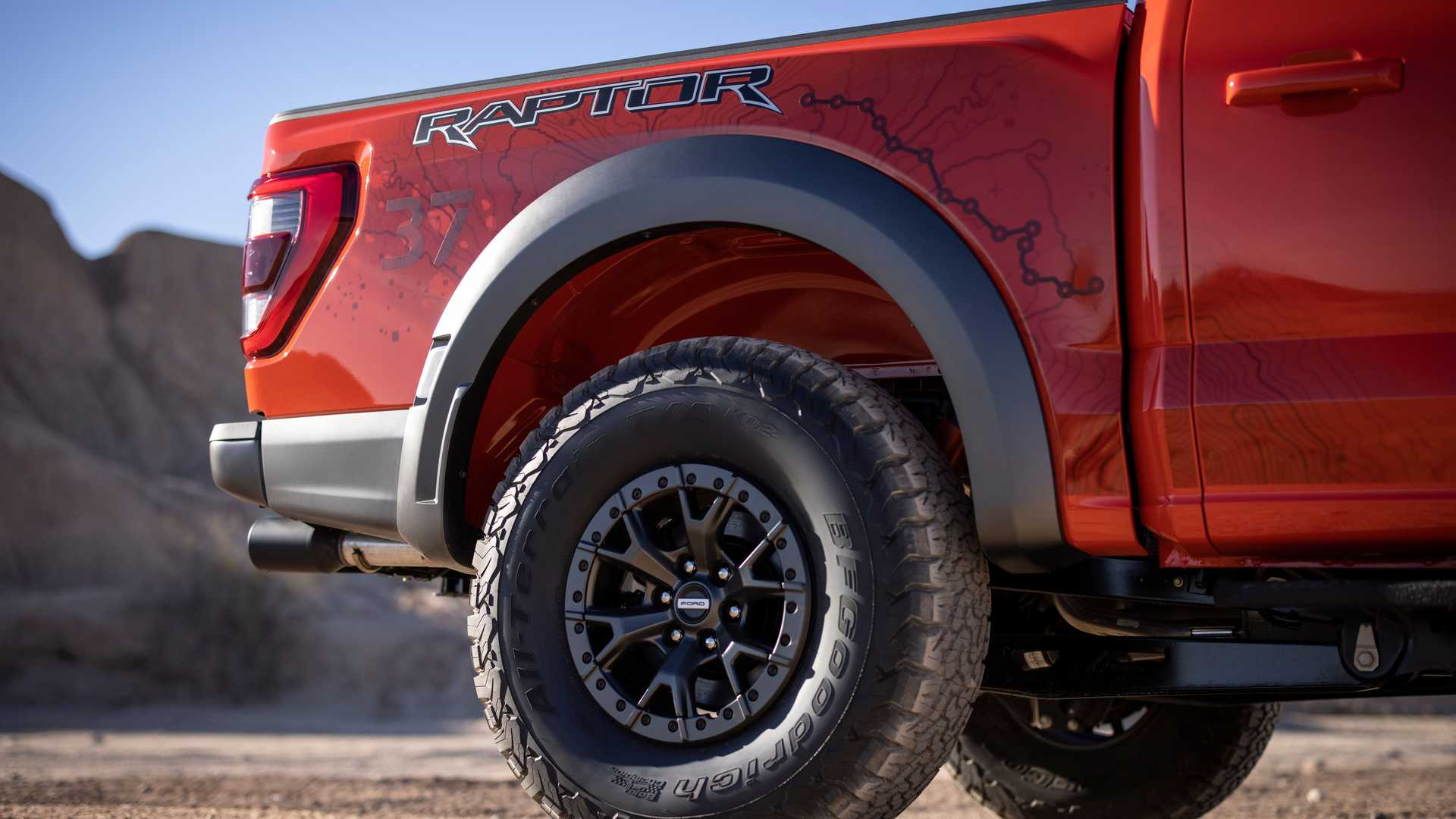 At a technological level, we find a whole list of driver assistance, with up to seven driving modes: Slippery, Tow / Haul, Sport, Normal, Off road, Low Y Rock crawl; that act on the steering, the engine, the stability control, the active exhaust valve, the active damping system, the 10-speed automatic transmission …

A new specific feature of the Raptor is the Trail 1-Pedal Drive, a system designed to assist the driver in extreme off-road situations. The system simplifies the driver’s footwork by combining acceleration and brake operations on the accelerator pedal: press to go, release to brake.

The system is accompanied by Trail Control, which functions as a cruise control for off-road use. It can be complemented with the optional 360 degree camera package. For the first time in history, Ford also offers the F-150 Raptor with 35 or 37 inch tires, which will vary the dimensions off road. 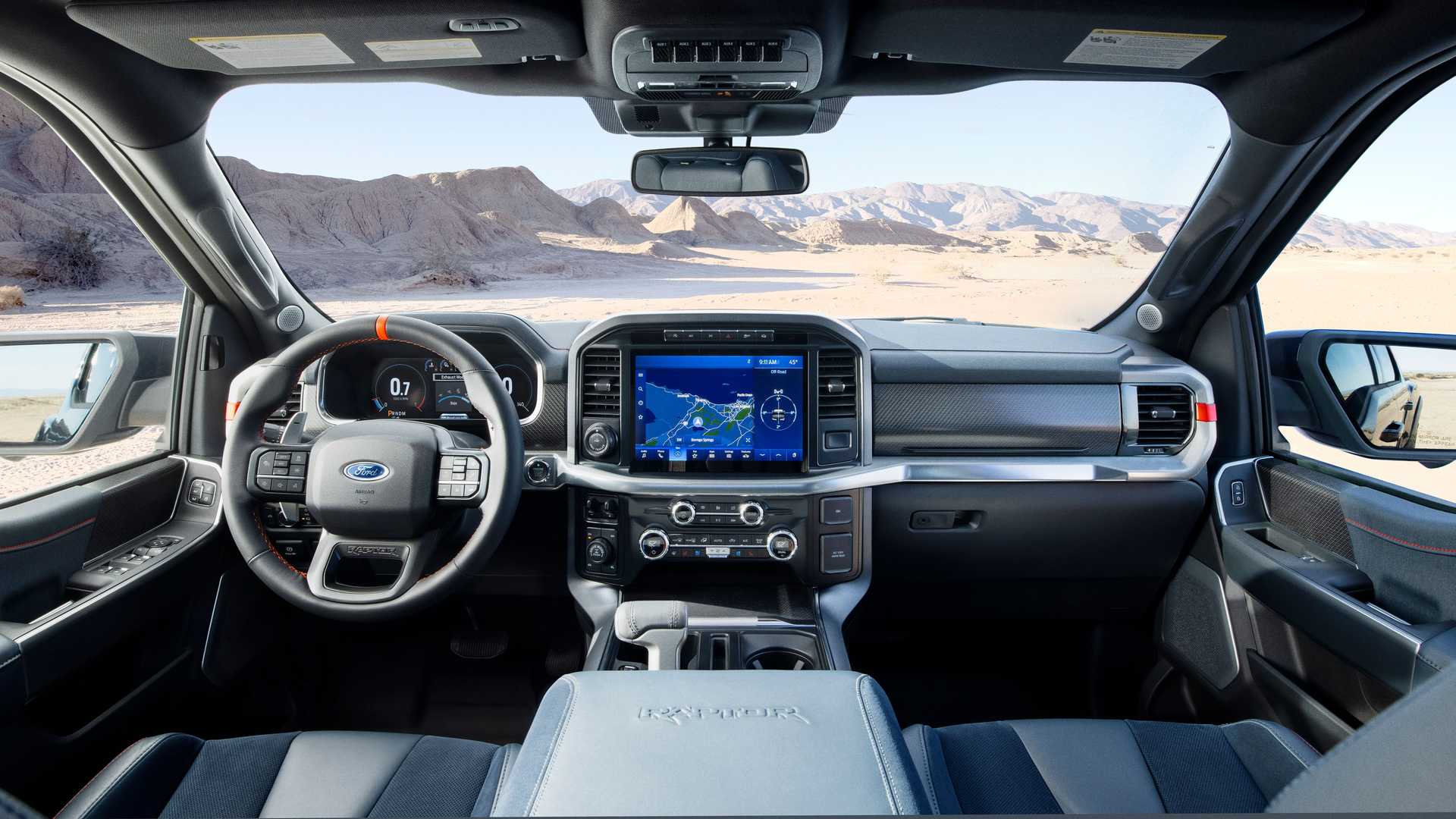 However, it should be noted that the 35-inch tires give the new F-150 Raptor exceptional damping travel, with 356mm at the front and 381mm at the rear. Once again, the pick up sits on a high strength steel frame which has been reinforced in key areas, such as the front turrets, which are now taller and stronger.

The entire suspension has been reviewed and is once again signed by Fox, with shock absorbers, springs and a host of modified parts. Ford has also redesigned the rear suspension, which adopts a new specific five-arm configuration, with coil springs to provide greater control and power to the ground on rough terrain at high speed. 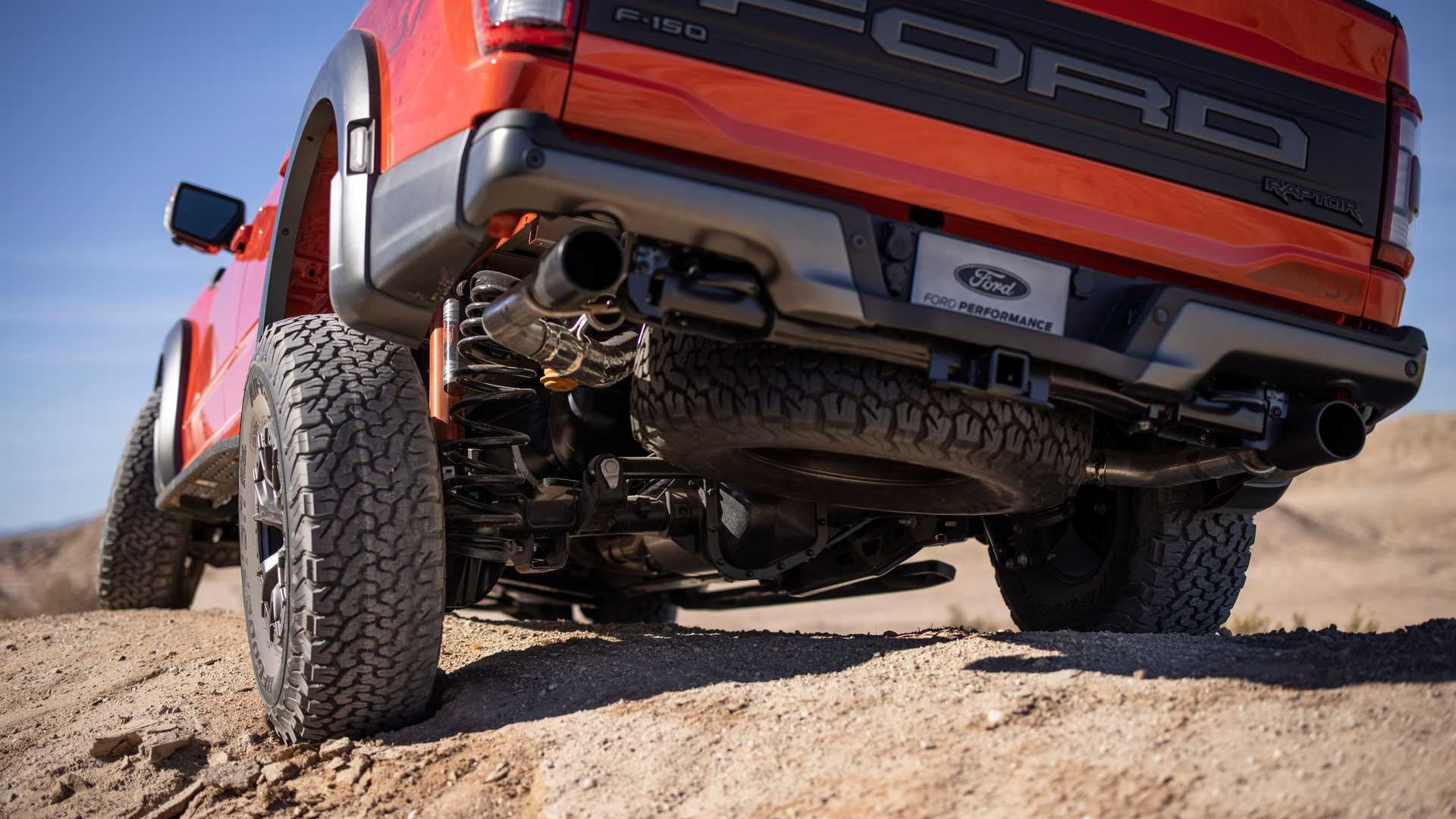 The new five-link rear suspension features a Panhard bar and 61cm coil springs, the longest in the segment.

Another highlight are the new internal bypass dampers Fox Live Valve electronically controlled, with position sensitive damping adjustment. These are the largest shocks ever installed on a Raptor, with anodized aluminum bodies that measure 3.1 inches in diameter and are filled with a low-friction fluid.

This has been specially designed for decrease friction losses, thus offering greater comfort on and off the road. Live Valve shocks come with new race-tested, electronically controlled valves, as well as new suspension sensors capable of acting 500 times per second.

Probably the most disappointing thing about the new Raptor is the interior, where there are hardly any changes. The modest aesthetic updates are mixed in with the standard design of other conventional versions of the F-150. There are some details in orange, carbon fiber trim and the Shift paddles on the Shelby GT500.