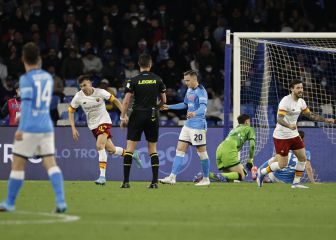 Except for miracles, Napoli have said goodbye to the dream of fighting for the scudettowhich is now a matter of two between the teams of Milan. The Azzurri risked their lives in their stadium, before Fiorentina and Rome, and only knew how to harvest a pointagainst the Giallorossi, who were even close to victory. Those of Mourinho, on the other hand, leave Maradona extending their streak without defeats to 12 days. They have not lost since January 9 and are still on the lookout for fourth place in the Juventusto five points.

The afternoon, however, had started well for the Azzurri, who in the seventh minute they forced a penalty with Lozano, knocked down by Ibáñez in the area. Insigne materialized the maximum penalty and the locals, until the break, kept control of the game, but it cost them a lot to create danger again.

Roma, on the other hand, went from less to more over time. At 39′, a foul Pellegrini (deflected by Osimhen) hit the crossbar, and in the second half Mou’s team made merits to put the tables. Spalletti removed Insigne, Lozano and Osimhen, the Azzurri totally gave up attacking and, after a huge opportunity wasted by Abraham, in minute 91 the romanisti got the deserved 1-1 with a collective play well finished by the revulsive El Shaarawy. It was the goal that he definitively turned off the Maradona and to Napleswho is now four points behind Milan already two of Inter, which must recover a match. To continue dreaming of the scudetto will be very complicated. Y Lorenzo Insigne, who left the field in tears, made it very clear.