In my last article, I left you when we had spent several days on the west coast of the South Island of New Zealand, between discovery of glaciers and very rainy days. After several wet days, the sun had finally returned, allowing us to enjoy the coast in a new light. But despite the good weather, the coast was quite disappointing. No more, no less beautiful than what we had already seen since our trip. It must be said that the 2 weeks spent on the west coast of Australia had put us so full of eyes that, the more we advanced in our journey, the more difficult we became to be satisfied … So when we had to decide on the he place we would spend the next day before heading to Abel Tasman Park the day after, we didn’t really have to wait. As long as the weather was nice and we could dry the tent and our clothes, we would be satisfied. This is how we headed towards Nelson Lakes Park which we had absolutely never heard of.

And we took a monumental slap.

When the rain invites itself to the party …

Well, to be very honest, in real life, things were going pretty badly. Arriving in the evening in the Nelson Lakes region, we could not find a camping spot and while it had been fine all day, the big dark clouds threatening to bother us. And then, the few belvederes indicated on the map were rather blah blah.

We finally found a small campsite that looked pretty good, right next to a lake. Even if we felt the catastrophe coming, it was that or nothing.

See also  On the way to Moncton via Bouctouche and Shediac

So, when the first drops of rain ricocheted off the tent, the co-traveler, more lucid than me, preferred to “sleep” in the car. Valiant , I told myself that we had seen others and that I am not in sugar and patatipatata. In short, lazy to leave my warm sleeping bag in the middle of the night and under the fleet. Come what may. As you can imagine, at 3-4am in the morning, the tent placed on a small ditch began to take water. I had to resolve to join the hilarious co-traveler in the car to try, somehow, to end my night …

Finally, the soft morning light that pierces through the fogged windows of the car pulls me out of the arms of Morpheus. The ground is waterlogged, the tent looks like nothing, but the sun floods with its aura the thousands of droplets that sparkle like diamonds all around the car. Magical.

While everything seemed bland and uninteresting to me the day before, I completely change my mind in the light of this spectacle.

The weather is nice, the clouds are clearing, but what are we waiting for to go hiking ???

Mount Robert and its marvelous panorama

Neither one nor two, we are shod, ready to do battle with the mountains of Nelson Lakes Park rising up in front of us.

The hike to Mount Robert and its panoramic view over Lake Rotoiti immediately agrees with us. Rare enough to consider it as a sign of a good day ahead, I tell you!

The first 2 kilometers in the shade (or rather under the humidity) of the forest are not really transcendent. I’m cold, you can’t see anything, I’m starting to regret this rotten idea of ​​wanting to hike at all costs. We could also have stayed sunbathed by the lake and ended our night quiet or pépouze. It’s true, what.

As I grumbled to myself, I couldn’t see that we were leaving the forest. The heat of the sun on my skin made me look up and, ooooooh !!!!! 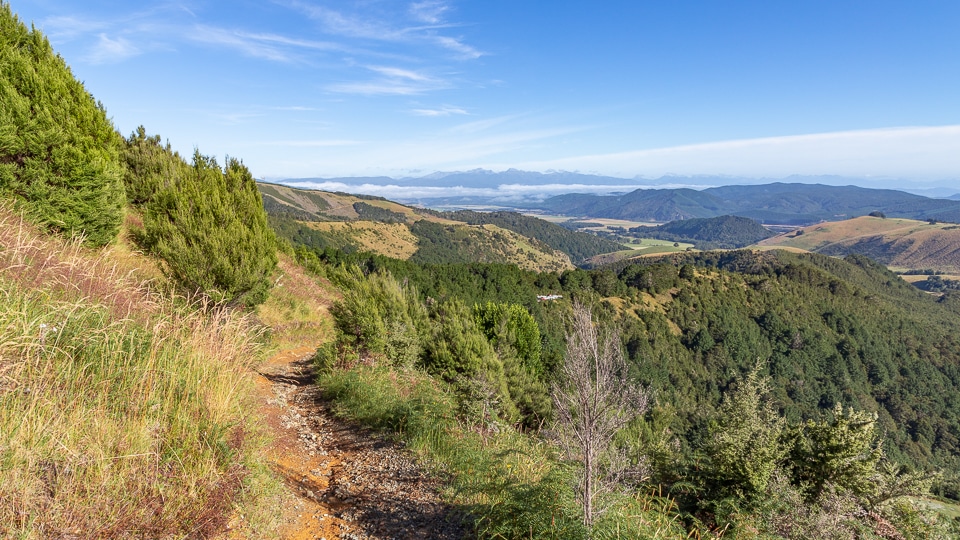 All of a sudden, we were pretty good at hiking. Surely much better than piled up on a beach with sticky sand between your toes (yes, I don’t like all those grains of sand that creep everywhere). The smile was back, the scenery was splendid, it was perfect.

From the top of Mount Robert, the view was even more striking on the lake below and the mountains with such special relief. The moor was covered with a multitude of white flowers, a magnificent summer carpet that almost made me want to roll into it! 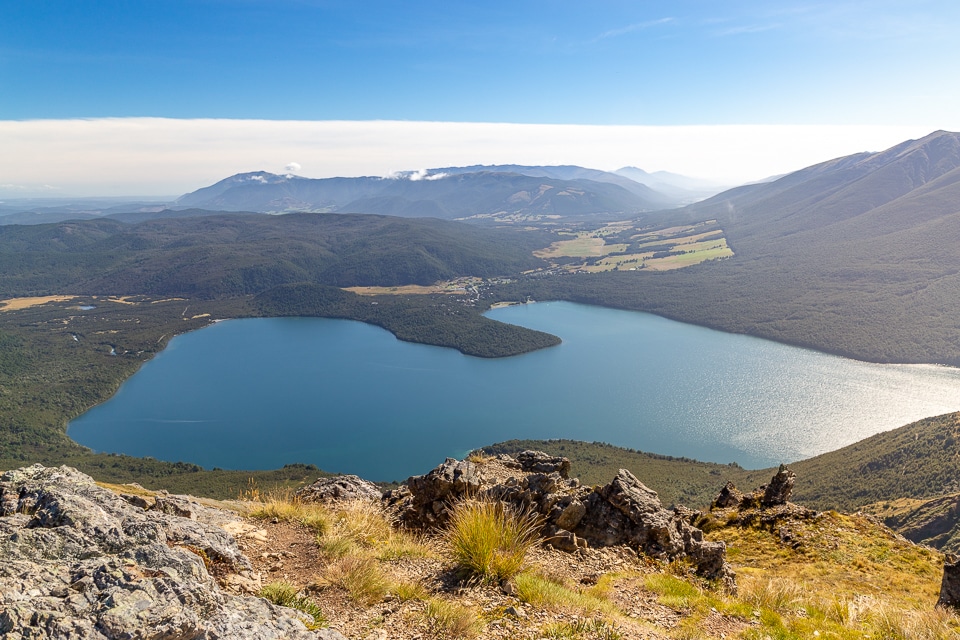 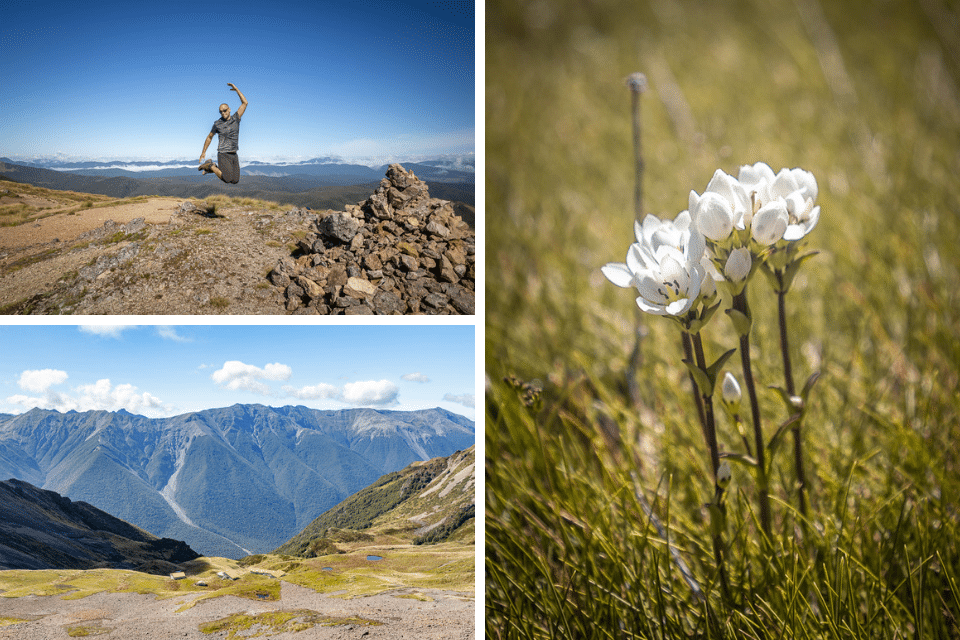 Finally, it was nice, and we didn’t really want to go back down. We wanted to enjoy this landscape a little longer so we thought we would continue until the next summit, the Julius Summit.

And you know what ? It was a really good idea. After the first ridge, the landscape has turned into an arid, lunar, mysterious land. I repeat myself, but how beautiful it was! 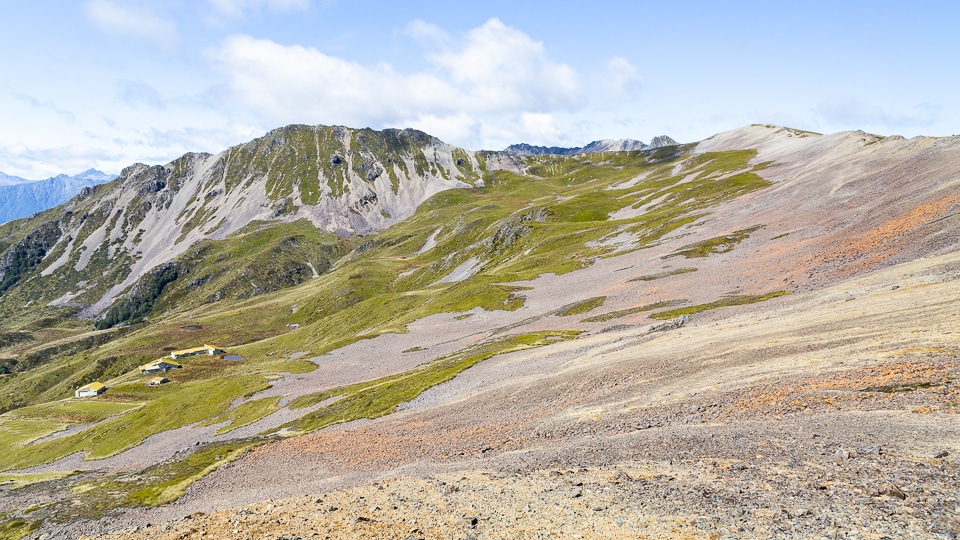 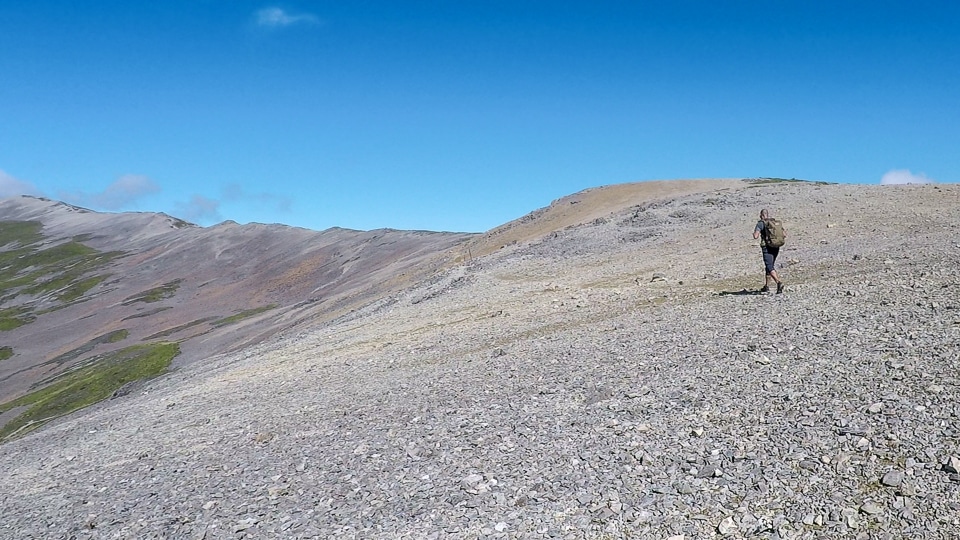 We walked along the ridge for several kilometers, completely under the spell of this scenery that we were far from expecting to find in this place, that very day. One thing is certain, Nelson Lakes Park is aptly named after all the lakes that we could see along the route! 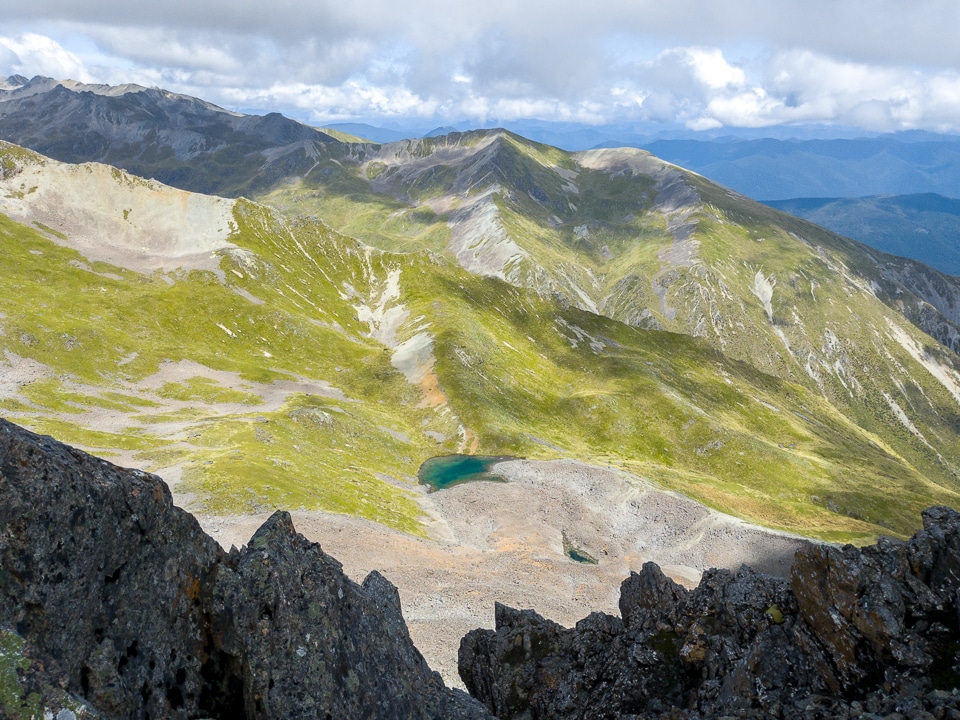 Arrived at the Julius Summit, it was still possible to continue to other lakes a little further and return to the starting point by making a loop. Surely a magnificent extension, but to be expected over 2 days… If you have the opportunity and the time, frankly I think it’s worth it!

Instead, we just ate our picnic at the top, facing this crazy panorama.

I think I enjoyed this walk, as much for its splendid landscapes as for having been alone to enjoy it for almost 5 hours. Quite rare in New Zealand, it must be admitted.

Then, as we finished our last bites, the clouds began to rise and curl over the ridge, like a sheet to be wrapped around the bed. Hey, no! What the hell is this not bedtime! As we didn’t want to get stuck under this opaque duvet, we finally preferred to hurry to reach Mount Robert before finding ourselves trapped on the ridge. And believe me, on a hike, you don’t really laugh when you’re blinded by mist or rain on a ridge, it can quickly become very dangerous. 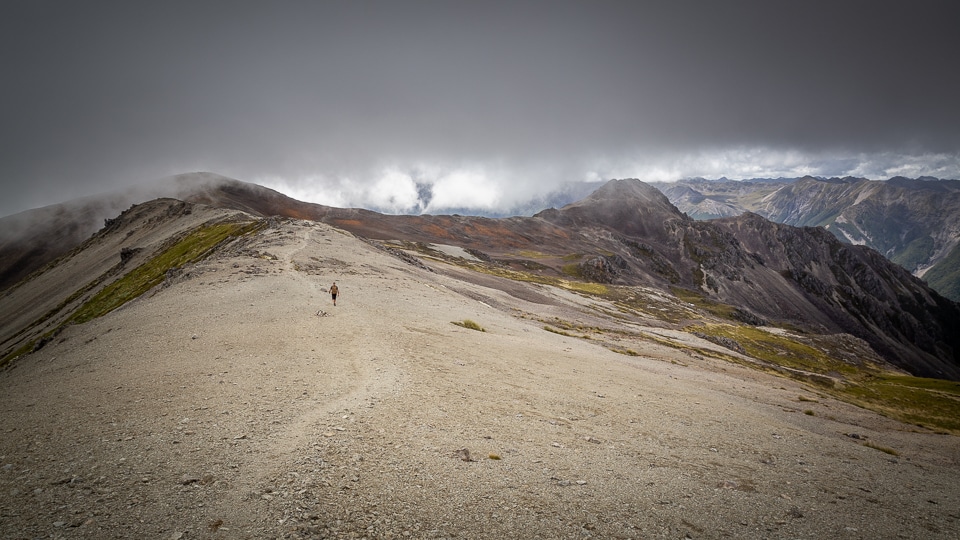 The mist having trapped itself between the two passes, we were able to find the sun at Mount Robert with an even clearer view than in the morning on the lake!

Hundreds of more photos in the camera and we found our car, tired but stars in our eyes after this wonderful day in the still little frequented park of Nelson Lakes. 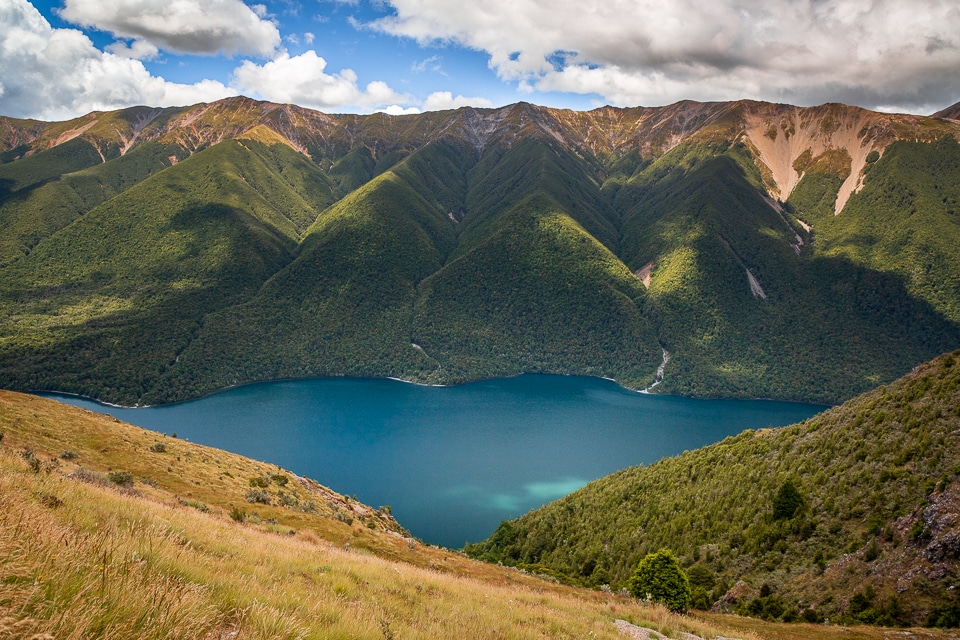 All we had to do was cross our fingers that the next day would be so nice on Abel Tasman’s side!