Apple a few hours ago released its financial report for the 1st fiscal quarter of the year 2021, be the 4th calendar quarter of the year 2020. The report therefore focuses on the months of October, November and December 2020, a period normally important for tech companies, given that it takes into account notable events such as Black Friday, Cyber ​​Monday or Christmas again, all three underlying a massive increase in sales.

And this was not lacking for Apple this year, which records several new revenue and profit records over the period.

These are not less than 111.4 billion dollars in revenue that Apple achieved during the 4th quarter of 2020, with profits reaching $ 28.8 billion. The progression compared to the same quarter of 2019 is huge: + 21% for revenues and + 24% for profits.

On the profit side, with + $ 6.6 billion recorded this quarter compared to the same quarter the year before, Apple is largely making up for the year-on-year decline recorded in the previous quarter ($ -1 billion) . 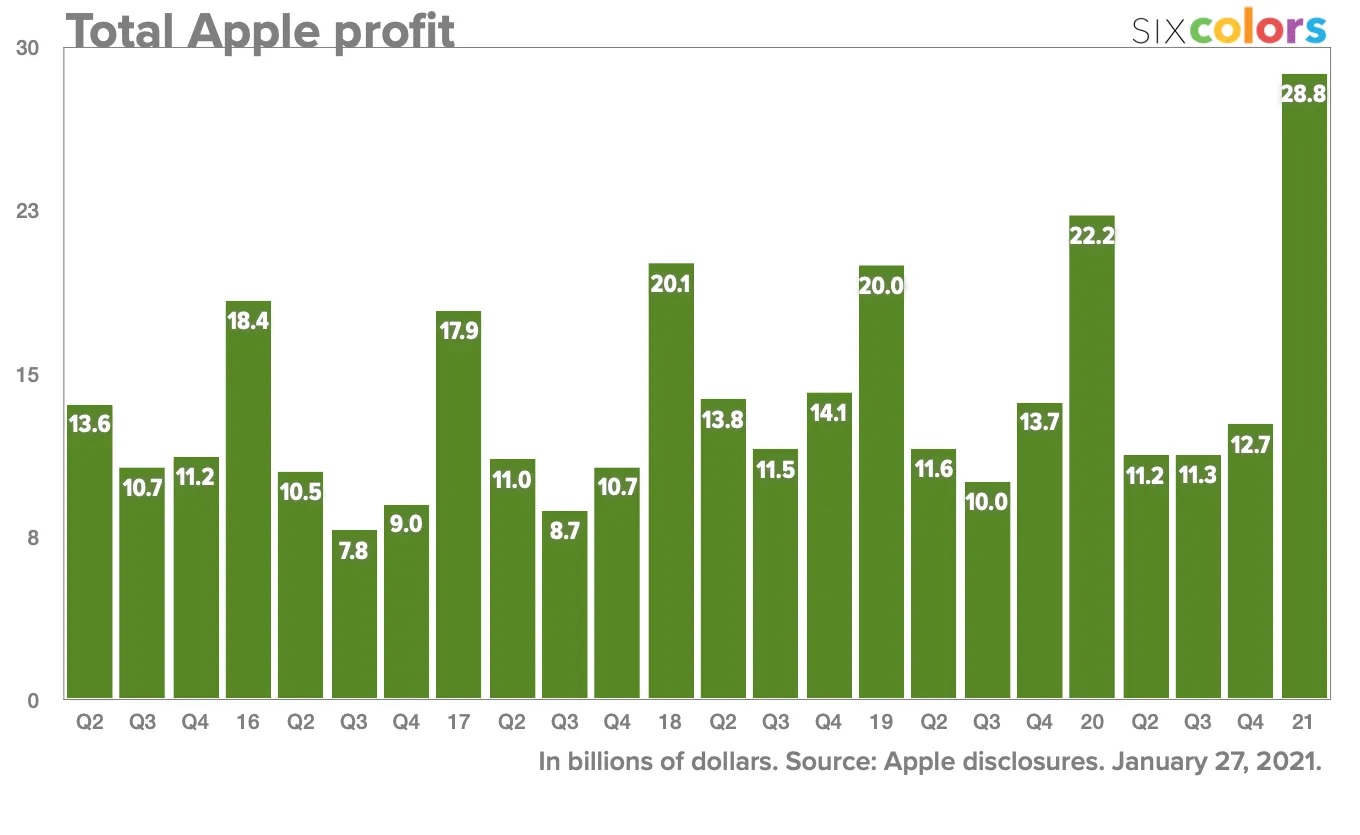 And it makes sense, the iPhone this year arrived exceptionally late. Usually, it comes out in September and its first weeks of sales give Apple an already financially interesting third quarter. But in 2020, the iPhone 12 arrived in October (for the 12 and 12 Pro) and in November (for the 12 mini and 12 Pro Max). Thus, all iPhone sales are currently focused on the 4th quarter of 2020, which certainly allows Apple to reach these new records of profits and revenues.

But this “iPhone lag” effect is not the only factor in this historic quarter, as detailed below.

Apple is the iPhone above all

In Q4 2020, the iPhone generated 65.6 billion in revenue. This is a new record for Apple, noting an increase of 17% compared to the year before. 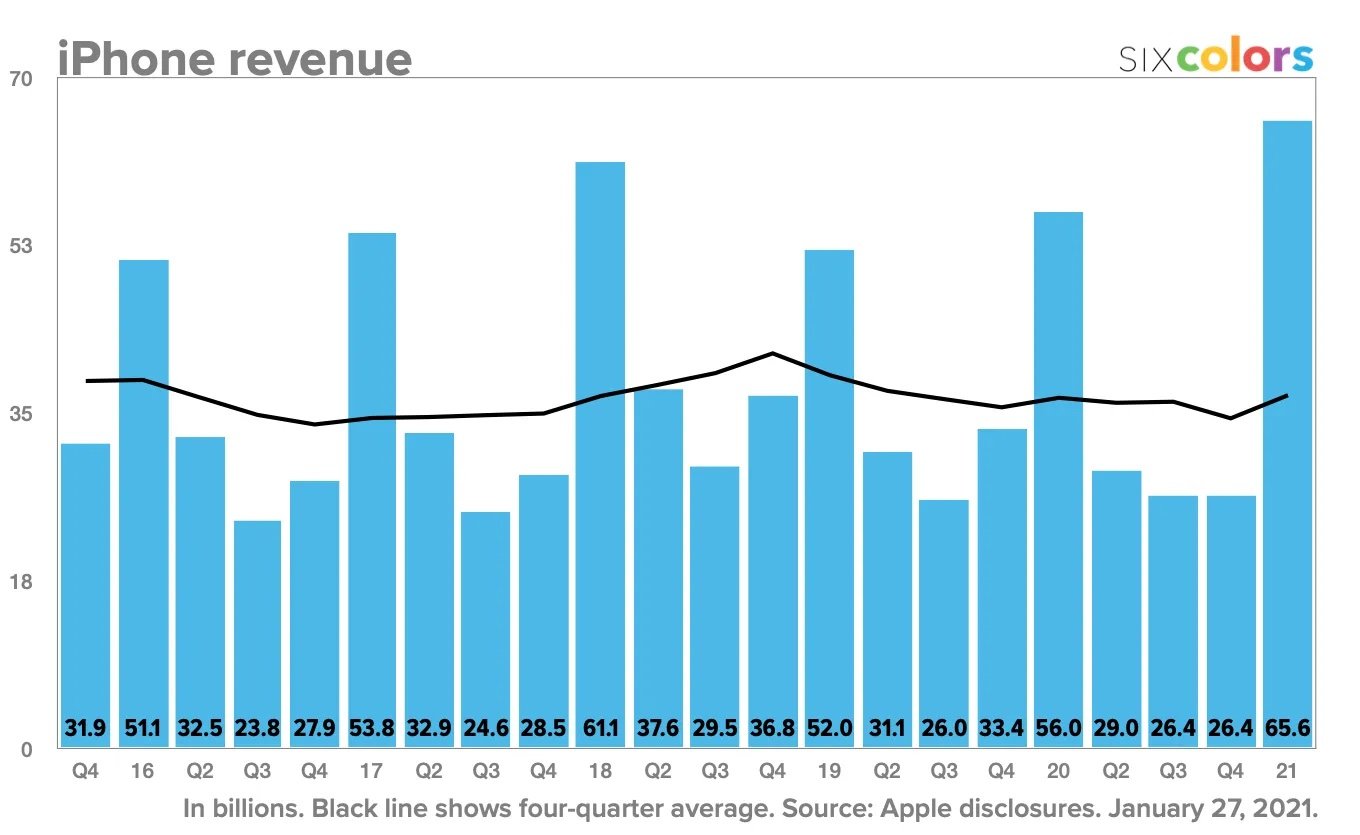 This result is obviously caused, as stated above, by the delay in the release of the new generation.

But if we look at the second half of the year, to try to erase the “late release” effect, we see that the iPhone underlies $ 89.4 billion in revenue in 2019, against 92 billion for 2020. The increase is less impressive (+ 3%), but still present. The iPhone therefore sold more in the second half of 2020 than the previous year and the delay may not have had an impact overall.

The Mac generated $ 8.7 billion income over the interest period, ie less than the previous quarter (-0.3 billion), but more than the same quarter of the year before (+1.5 billion). 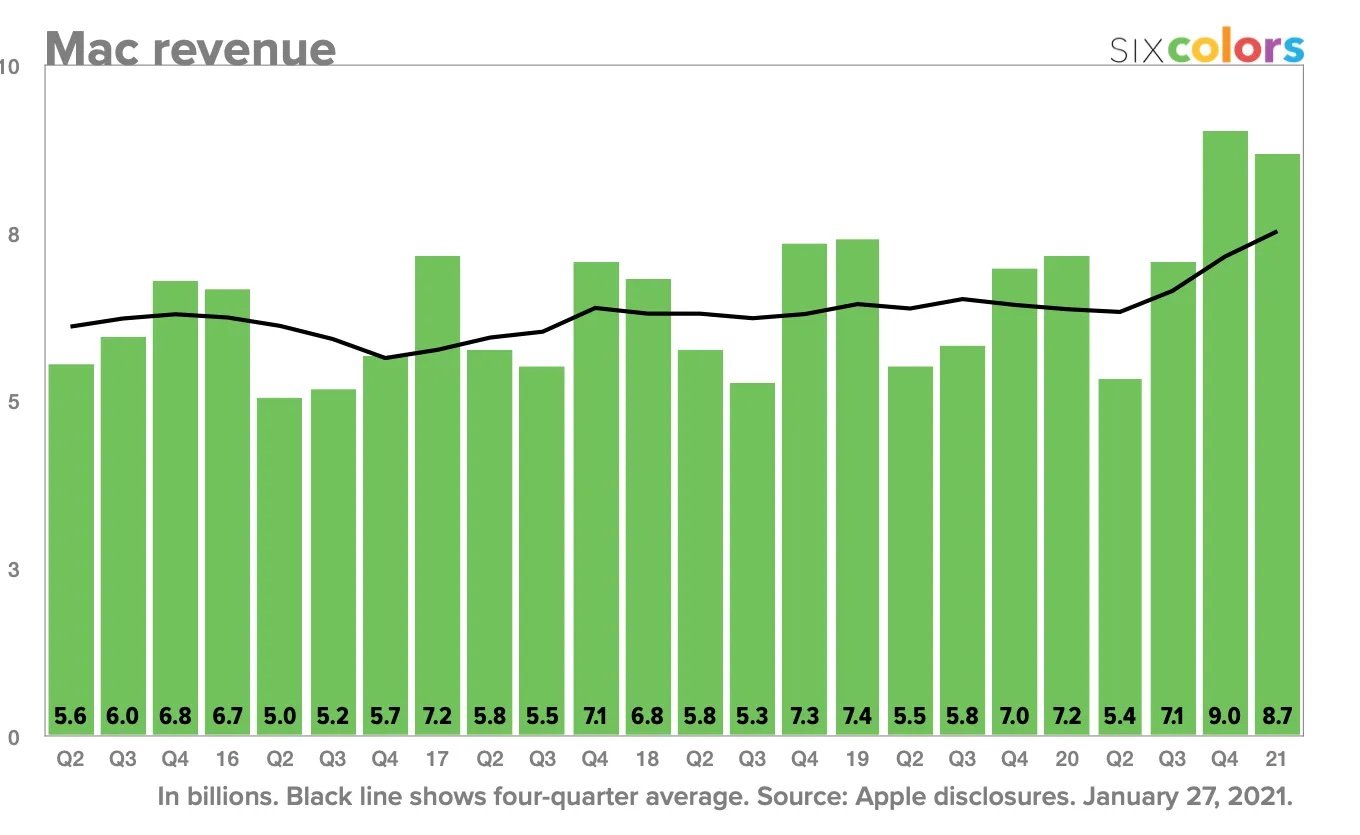 The lockdowns in various countries around the world really pushed Mac and iPad sales in 2020. The progress in terms of revenue over the past year is a good illustration of this. In 2020, Macs and iPads generated 22 to 46% more income compared to the previous year, from April to December. 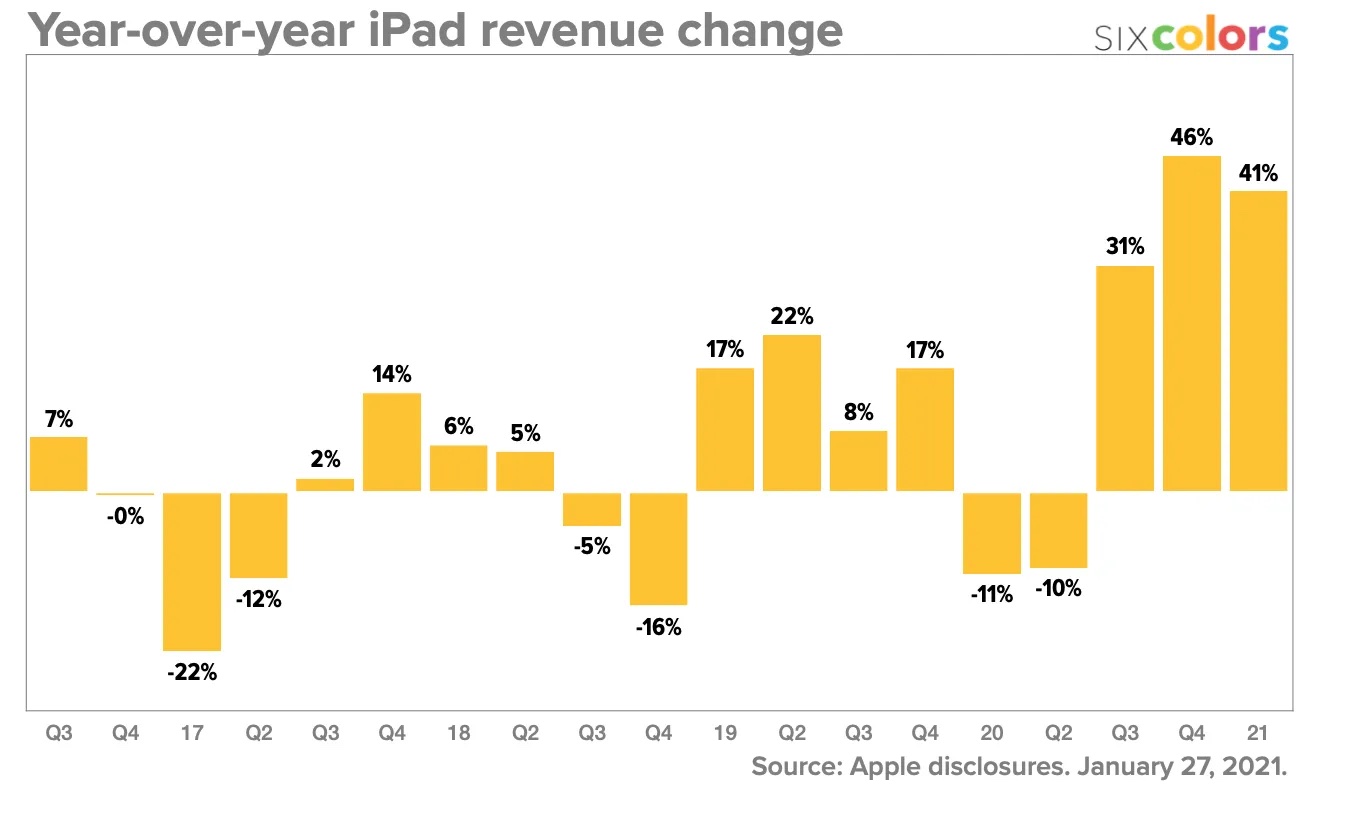 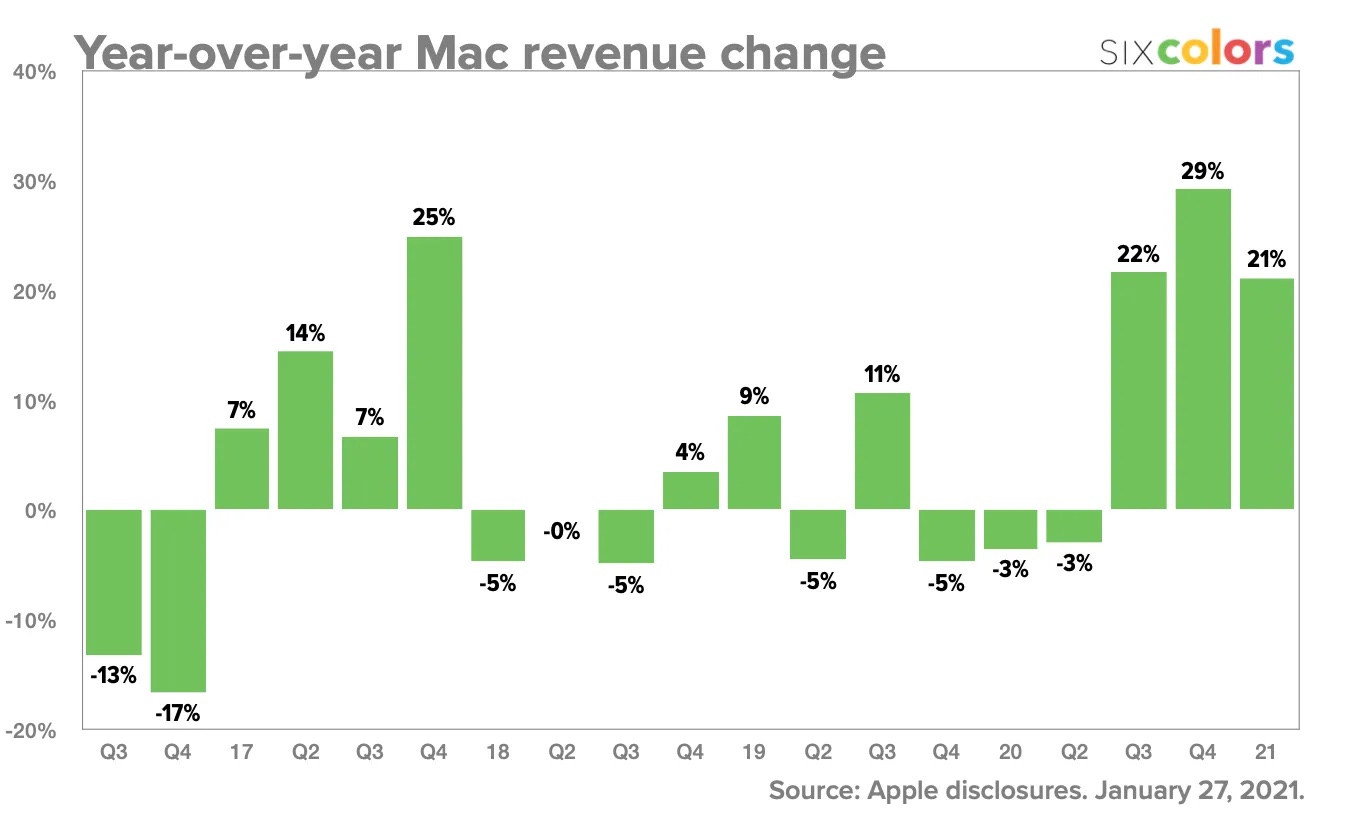 The services also record a new record of generated profits, with $ 15.8 billion. It’s 24% better than the year before. This category of Apple products has therefore continued to grow steadily for several years now, driven by Apple Music, Apple TV +, Apple Arcade, Apple News +, and more recently Apple One and Fitness +, both launched at the end of last year. 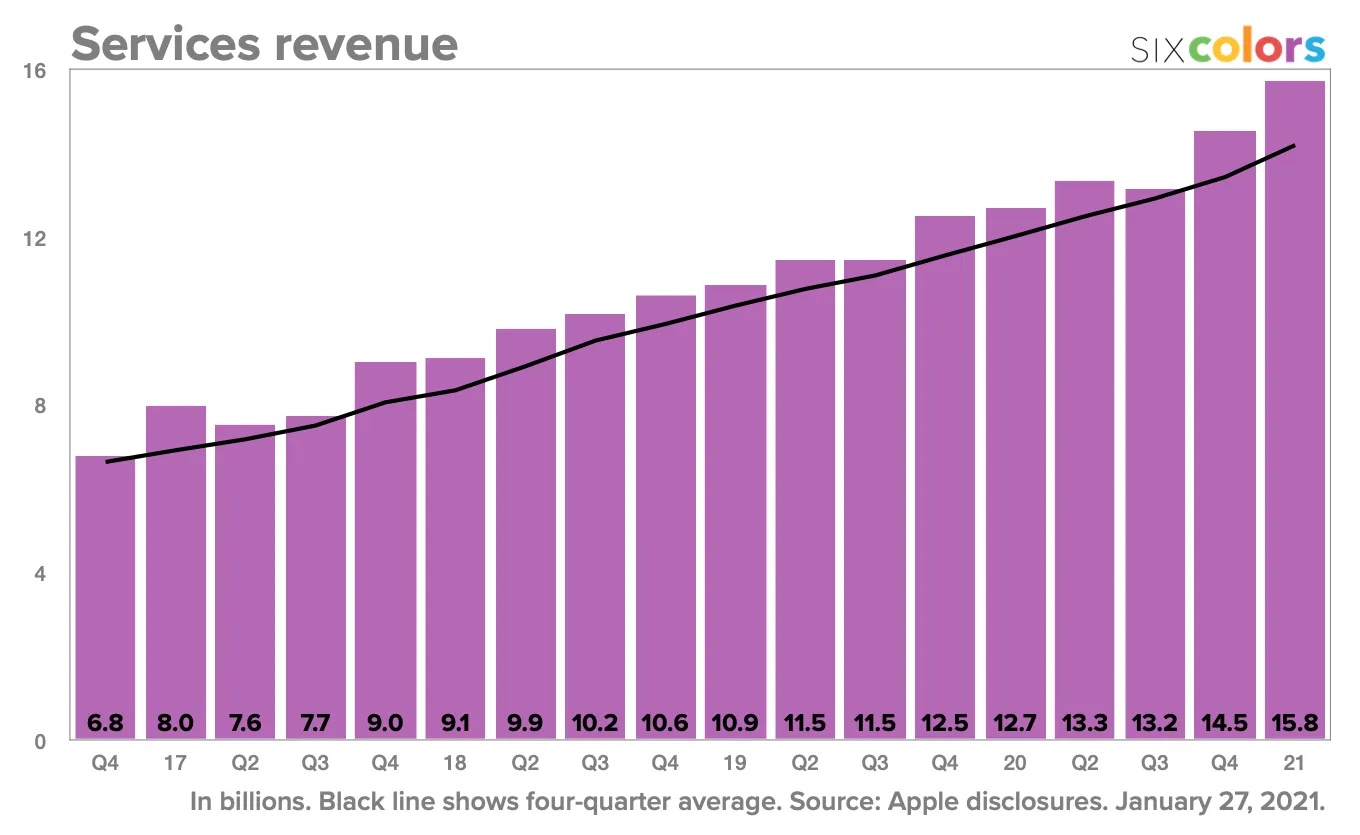 For the last category of connected accessories and home accessories, again, a record of income should be noted: 13 billion dollars for the defined period and an increase of 30% compared to the previous year. 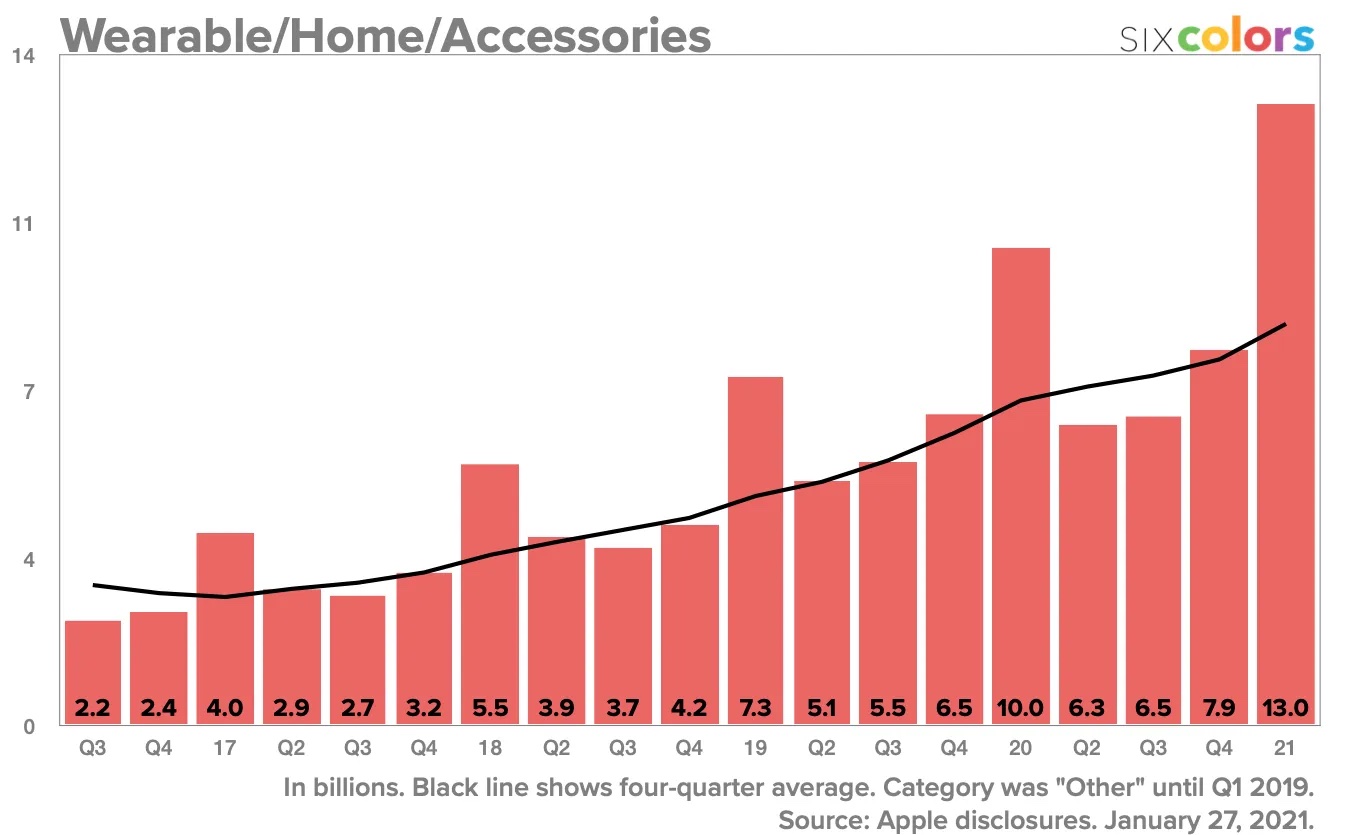 This category includes the Apple Watch, but also the HomePods and AirPods, including the new AirPods Max headset. And like the service category, this product category has been growing steadily without batting an eyelid for several years now.

See also  Starting from an old iMac to make your DIY Studio Display: it's possible

The quarter of all records

2020 was a very special year for the whole world and therefore for Apple. The first quarter of 2020 had not started under the best auspices for the Californian. But it did not last. The second and third quarters were very good financially, particularly driven by services and renewed interest in the Mac and iPad. 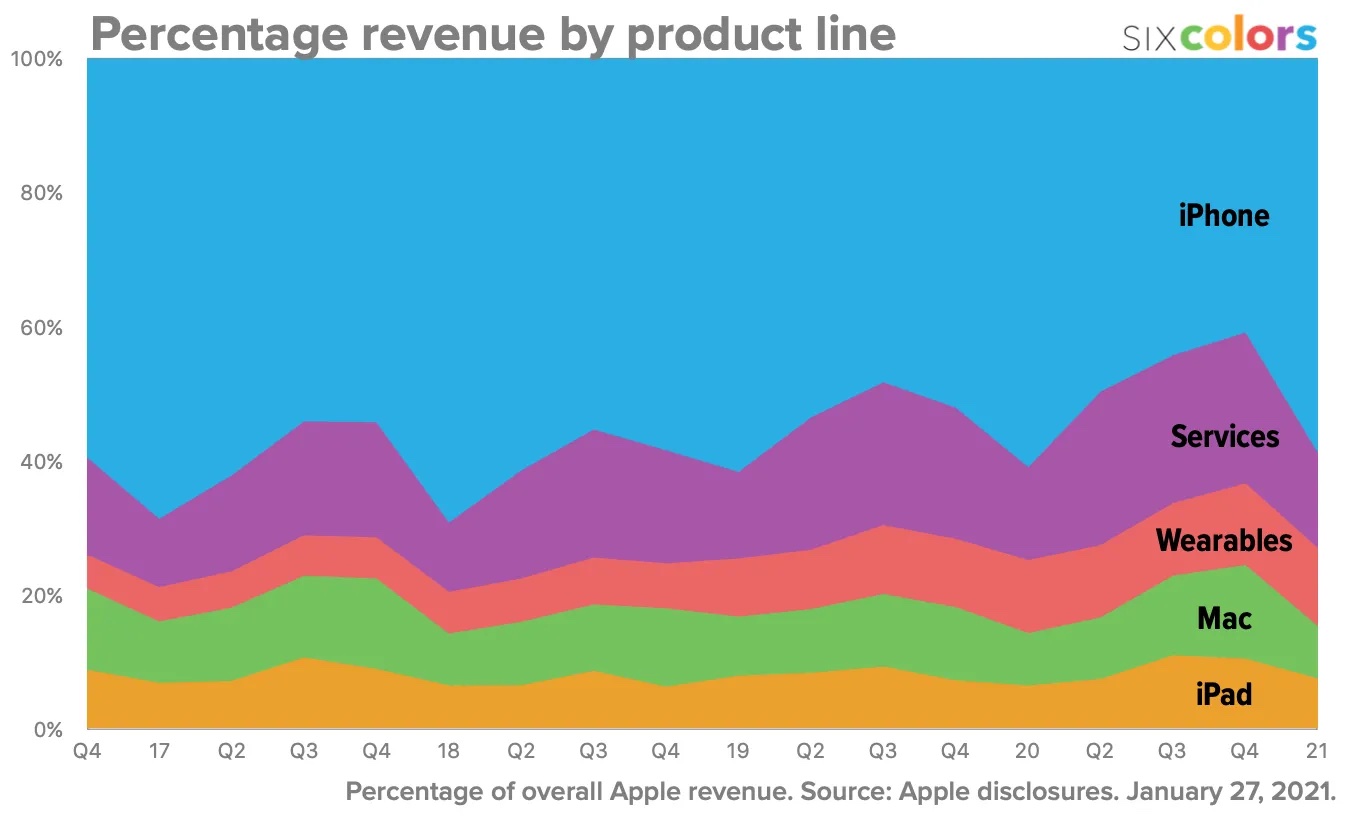 The results for the last quarter of 2020 only confirm this trend, to which is added phenomenal iPhone sales. In short, COVID-19 and the global pandemic only tickled the Cupertino giant.

See you later today for a review of the classic Tim Cook-to-journalists exchange that takes place after each results announcement.