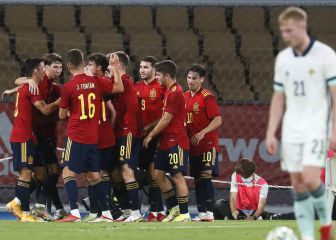 The Spanish Under-21 team beat Northern Ireland in a great game where the result could even fall short. Abel Ruiz he opened the scoring in the first half before a gale of goals in the second. Bryan Gil twice, Miranda, Riquelme and Víctor Gómez certified the victory of La Rojita in the penultimate match of the qualifying phase.

The domain of the Spanish team was total during the 90 minutes of the game. The Northern Irish team only had one clear chance, but Pacheco just annoyed Allen in the definition. It was before Abel Ruiz scored at the exit of a corner.

Miranda went back to attend Bryan Gil in the second of the match. The Valencia striker made the third after a death pass from Camel. Mirandaone of the best in the game, scored the fourth in a transition.

With everything resolved, Spain continued with its foot on the accelerator. Riquelme, after a personal move, and Víctor Gómezbefore the passivity of the local defense, they closed the set and the match for the U-21.

See also  The AEK of Athens, a European outlet for Diego Lainez