165.30 dollars: this is the amount that had to be spent at the close of Wall Street this Tuesday in the late afternoon to afford a share of Apple, a figure never reached before and which continues on previous results at their highest in the past few weeks. If we convert this amount into local currency, it would cost you around 146 euros to offer you a share and thus hold a voting right in the company.

Of course the trading fees are not included and depend on the platform you choose (Revolut, Degiro, Trade Republic, Lydia…). But betting on this title will allow you to make your voice heard during crucial decisions relating in particular to internal investigations in Cupertino, the confirmation of Tim Cook at the head of the company or the choice of the audit firm responsible for analyzing its accounts. 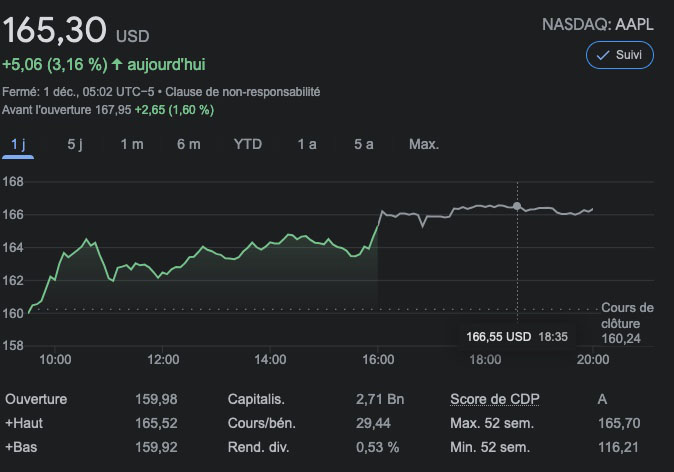 With now a capitalization of around $ 2.7 trillion on Wall Street, Apple therefore continues to place itself at the top of the highest quotations on the planet to date. In second place comes Microsoft, publisher of Windows, the most installed operating system in the world, far ahead of macOS. As for the last step of the podium, it is occupied by Alphabet, parent company of Google and its dozens of subsidiaries.

Still on the technology side, Amazon is fifth with around $ 1,778 billion in valuation, just behind Saudi Aramco’s oil. Then comes Tesla, followed by Meta (Facebook, WhatsApp, Instagram, Giphy, Oculus) and Nvidia. Competitor of TSMC (10th), the founder does not manufacture the chips of the headed computers unlike the Taiwanese but takes care of the graphics cards of many other PCs.

Apple’s key success factors can be explained above all by the undoubted success of its iPhones, which are selling like hot cakes around the world. But the latest quarterly results of the firm also prove that its various applications account for 22% of its total turnover, just behind mobile phones (47%).

Between the Apple One pack (Fitness +, TV +, Music, Arcade, iCloud, News +) and the metaverse of the group’s future virtual reality headset, everything suggests that these are only the beginnings of a real avalanche of income for it.