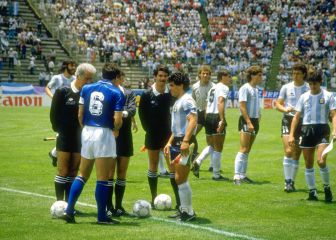 Another clash in a World Cup, this time in Mexico, and specifically at the Cauthémoc Stadium, before 32,000 spectators. Again, as in the 1974 World Cup in Germany, both teams faced each other in matchday 2 of the group stage, where the rivals this time would be Bulgaria and South Korea. Both teams came with options to win the trophy, and in fact, one of them would end up doing it. The match, as in 1974, would end in a draw, only this time it would be enough for both to qualify for the knockout stage. The match would begin with an early goal, the referee would point to a handball by Burruchaga inside the area, and Altobelli would be in charge of throwing it and converting it, thus adding his second goal in the tournament. Faced with adversity, Argentina clung to the best player in the world at the time, and the figure of the tournament. A cheeky man with the 10 on his back, and named Diego Armando Maradona, would score the equalizer with a pass from Valdano in the 34th minute, which would later serve the Albiceleste to classify as first in the group, which would later allow us to live that confrontation against England, where two of the most important events in the history of this sport took place: The Hand of God, and the Goal of the Century, both the work of the genius Diego Armando, who would end up lifting the trophy in that edition. In the photo, Maradona celebrates the tie.