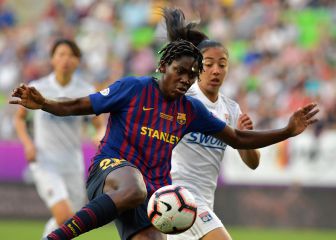 Dethrone Lyon. That is Barça’s objective this Saturday (7:00 p.m., DAZN) in the grand final of the Women’s Champions League in Turin. The current European champion wants to make history again and knows that for this he must mark an era, as the rival he faces has done. With seven titles to his name, five of them won consecutively, Olympique de Lyon is a legendary team. A team that, back in 2019, gave the Blaugrana a reality check in the final played in Budapest (4-1). From that night, a priori, dark, Barça learned a lot and knew how to keep the good, they were the first Spanish team to play in a women’s Champions final and Oshoala had managed to pierce the French goal.

That goal was more than just the so-called goal of honour. The Nigerian had taken advantage of a deep pass from Lieke Martens to win the back of the Lyon defense and put the final 4-1. That was a test: they had the game, the technique, the tactics, the desire. You just had to train more. match them in power.

Because Oshoala jumped onto the pitch at 75′ of that final to replace Toni Duggan and took advantage of his minutes to give dynamism to the Blaugrana attack and show that he was capable of equaling the power of Lyon’s defences. At least in a final stretch of the match.

In it 82′, the Nigerian attacker ended up finding the prize. Barça, who had had clear chances through Vicky Losada and Alexia in a second half already relaxed by the French team, got something historic. They would leave with defeat, but also with the certainty that, if they set their minds to it, they could reach the level required to win the Champions League.

“It is clear that winning Lyon is something that we haven’t done and that we have inside”, admitted Aitana Bonmatí, starter in that final, before the media. And it is that Barça has played three times against the French team with a balance of three defeats, seven goals against and only two for.

In addition to Oshoala, Patri Guijarro also knows what it means to mark Lyon dressed as a Blaugrana. He did it in the quarterfinals of the Champions League that faced both teams in 2018.

But there is another player who knows what it is to mark Lyon, albeit in a different shirt: Caroline Graham Hansen. the norwegian, who will surely be a key player in the final this Saturday, scored the winning goal for the German team against Lyon in the second leg of the 2017 quarterfinals. Somewhat, however, unsuccessful, because the French had won by two goals in the first leg.

Twice runner-up in Europe with Wolfsburg precisely because of Lyon, Graham Hansen, like all of Barça, will also want the French team.