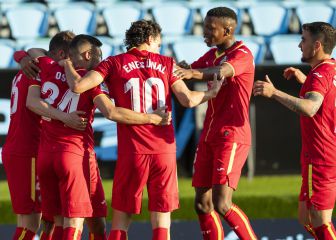 After the first victory away from the Coliseum, Getafe now has the opportunity to certify its permanence in the First Division in its own stadium, where it has shown great strength this season. Quique’s men have returned to training to start preparing for next Monday’s game against Betis. There will be a corridor to the recent Cup champion and then three vital points at stake. Betis has historically been bad at the Coliseum and he has not won in a blue feud since 2018. In addition to Mata, who will not play again this season, Cuenca is the only confirmed loss due to suspension. Being separated from the Erick Cabaco team, the defense is quite diminished.

And in a week another final at the Coliseum against Rayo Vallecano. A derby in which the franjirojos will not play much. Of course, if Betis is bad at the Getafense fiefdom, the opposite happens to Rayo and they have only fallen once in six visits in the top flight.

With the statistics in hand, Geta has a lot of chances to save itself, but there are contradictory indications. At the beginning of the championship he hit rock bottom against these rivals who clearly surpassed him. Of the five opponents he has left until the end, he was only able to defeat Osasuna and fell to Betis, Rayo Vallecano, Barcelona and Elche. A committed schedule, but with three games at the Coliseum. Two of them in seven days and the azulones want to end that week with the permanence in the pocket.