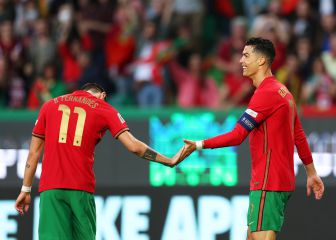 Portugal gets its first victory in this edition of the Nations League after beating Switzerland 4-0. A double of Ronaldo accompanied by goals from William Carvalho Y I cancel they place Portugal with four points.

Switzerland started well in the match. VAR disallowed a goal from Seferović before the lusa storm broke. Williamafter a foul kicked by Ronaldotook advantage of a rejection to make the first.

Cristiano scored a brace in just four minutes. The first with a dry shot from the penalty spot and the second taking advantage of a rebound in the small area. He was able to score several more goals, as he had several clear chances, but it was not the best day for the Portuguese in front of goal.

Cancelo closed the win with a goal to an empty goal after a false start by Kobel.