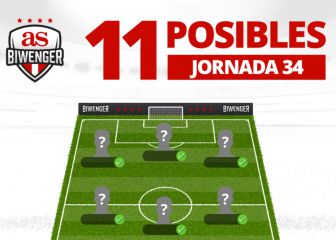 LaLiga Santander enters its final stretch. With five games to go before the lights of the championship go out, the swords are at their highest in the fight for Europe and salvation. This day has the plus that the real Madrid can win LaLiga if they win or draw against Spanish. Here are the news and casualties of day 34:

Andalusian derby with a lot at stake above and below. The sevillistas want to certify their presence in positions as soon as possible Championswhile the Cadiz seek to continue out of the descent. Lopetegui has the loss of the injured Fernando, Rekik and Martial, and the sanctioned Rafa MirIn addition to the doubts Suso and Tecatito. Sergio he will not have the injured at his disposal Haroyan and Ruben Alcarazin addition to having the doubts of Iza and Florin Andone.

The babazorros no longer have any more room for error if they want to continue in the top flight, so they need to go for the 3 points. The yellow submarine also needs victory, although in this case to fight for European positions. Julio Velázquez will have his entire squad available. Emery will continue without being able to count on Alberto Morenoand have doubts Coquelin, Gerard Moreno and Yeremi Pino.

Whites can mathematically certify the title if they get at least one tie. In front will be a virtually saved parakeet group, but who wants to be totally calm and make that mathematical salvation as soon as possible. Carlo Ancelotti recovers Modric, Mendy, Jovic, Bale, Marcelo, Mariano and Vallejobut has the casualties due to sanction of Military and Nachoand due to injury Hazard and Miguel GutierrezIn addition to the doubts Casemiro and David Alaba. Vicente Moreno is out due to injury to Keidi Bare and Óscar Gil.

Derby of the Valencian Community in which the locals will seek to make up for the defeat in the Cup and the visitors will get closer to salvation. Bordalás recovers Gabriel Paulista and Foulquier, although he loses Ilaix Moriba through suspension and have doubts Lato and Maxi Gomez. Lisci recovers Campaña and Cáceresbut he will not be able to count on the injured Mustafi and De FrutosIn addition to having doubts Roger, Clerc and Shutter.

The Basques are only worth the victory to continue fighting to get into European positions, while the colchoneros will seek victory to establish themselves among the first 4 classifieds. Marcelino recovers Lekue and Villalibre, but has Sancet and Petxa out due to injury. Simeone recovers Kondogbia, Héctor Herrera, Giménez and Felipealthough he loses by penalty to savic and due to injury Joao Felix and Lemar.

Meeting in which both teams will come out with a clear conscience, having almost guaranteed the objective of salvation. The people of Elche will not want last-minute scares, so they will try to make their permanence official as soon as possible. The rojillos still have European options, although everything goes through making a full of victories and waiting for what their rivals do. Francisco recovers Omar Mascarell and Guido Carrilo, although he has Lucas Boyé out. Arrasate recovers Torró, Kike García and Juan Cruzso you only have the doubt Jesus Areso.

The locals need to add 3 in 3 to try to leave the relegation places, currently having salvation at one point. The sky-blues hope to get at least a draw to reach the 40-point barrier and be able to certify their salvation mathematically as soon as possible. Karanka recovers Germán, Jorge Molina, Alberto Soro and Matías Arezobut still has a significant list of casualties: Carlos Neva, Neyder Lozano, Raúl Torrente and Rochina miss out due to injurywhile Domingos Duarte, Quini and Víctor Díaz will not be due to suspensionAlso, they are in doubt. Gonalons and Santiago Arias. Coudet will not be able to count on the injured Hugo Mallo nor the suspended Murillo and Augusto Solari.

those of Vallecas arrive at the appointment with the peace of mind of knowing that they have almost fulfilled the objective of permanence, while those of Saint Sebastian they still have to keep fighting to, at the very least, maintain their position in European positions. Iraola will not be able to count on the injured Merquelanz nor the suspended Balliubesides having the doubt of Saveljich. Sheriff will not be able to count on the sanctioned Silva or the injured Oyarzabal, Carlos Fernández, Barrenetxea and Monreal.

The locals cannot afford any more mistakes if they want to at least finish the season in second place, although they will continue to fight for the title until the math says otherwise. For their part, the vermilion are provisionally out of the relegation places, although a defeat could make them return to occupy the last 3 positions in the table. Xavi Hernández will not be able to count on Dest, Migueza, Pedri or Sergi RobertoIn addition to having doubts Umtiti and Ansu Fati. Javier Aguirre has the important loss due to Muriqi’s sanctionin addition to not being able to count on the injured Sedlar, Greif and De Galarretawhile James Costa is doubt.

The azulones still have to keep scoring to get away from some relegation places to which they take 5 points. For their part, the Verdiblancos come with high morale after getting the Copa del Reybut they do not want to settle for that and will fight until the end for positions Champions. Quique recovers Maksimovicbut have the doubt Jonathan Silva and casualties of the injured Bush and the sanctioned Jorge Cuenca. Pellegrini loses due to injury to Camarasa and Montoyaand by sanction to akookoubesides having the doubt of Bartra.