Jimmy Fallon hosted renowned digital artist Beeple on his show and revealed that he now owns a bored ape NFT.

The famous American comedian, television presenter and actor, James Thomas Fallon, better known as Jimmy Fallon, has joined the fever of the tokens non-fungibles (NFT) after sharing with one of the biggest digital artists of the moment and announcing to his fans the investment in a first collectible.

The comedian has become the latest Hollywood star to venture into the crypto space and has even changed his profile picture on Twitter for an NFT of his own from the series.Bored Ape Yacht Club‘. Now your more than 50 million followers, as well as the millions of viewers of your show, probably know what an NFT is. 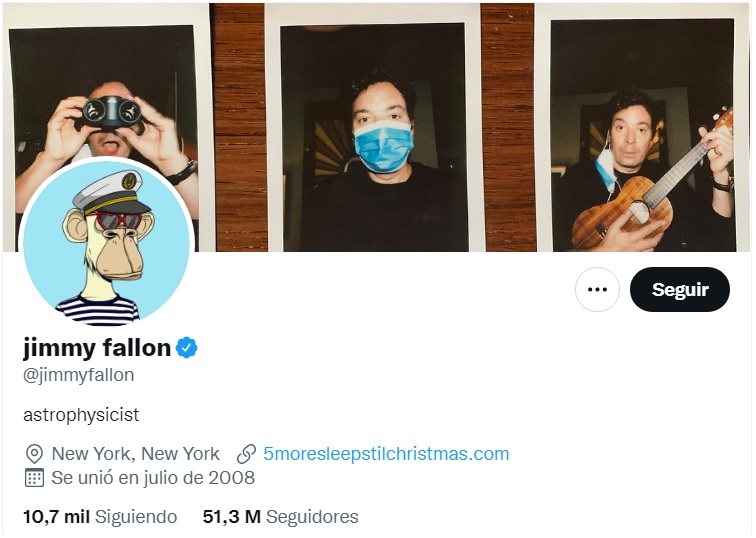 Beeple and the NFTs in ‘The Tonight Show Starring Jimmy Fallon ‘

Last Wednesday, the program The Tonight Show Starring Jimmy Fallon received Mike Winkelmann, the digital artist best known by his nickname Beeple, as a special guest. Beeple, who sold the most expensive NFT artwork in history so far, shared a bit about his story during the interview and He talked about how he had gone from selling art for $ 100 to becoming one of the highest-selling living artists of all time.

The Wisconsin-born artist explained to the audience that blockchain-based NFT technology had allowed him for the first time to monetize ownership of his digital art pieces. Winkelmann said that he had learned about the technology at the beginning of the year as a result of the comments of some followers of his art and that since then “things have gotten a little crazy“.

He added that the rise and explosion of NFTs this year had changed the dynamics for digital artists, allowing them to claim profits on their works.

.@Beeple reacts to some of the firsts pictures he created for his Everydays NFT. #FallonTonight pic.twitter.com/8V76CvZbXY

Before his iconic NFT piece, “Everydays: The First 5,000 Days”, Which was sold in March of this year for the exorbitant sum of USD $ 69 million, the most expensive works in Beeple they had been around 100 dollars, according to what he said during the program. Fallon spoke of the success of Winkelmann as the realization of the “American dream”And hinted that his most valuable work was a kind of premonition.

The JPG image of “Everydays ”, represented in NFT, it is a collage of 5,000 images created by the artist over a period of 14 years. Beeple told the presenter that it had started in 2007 – before the emergence of Blockchain– to capture images, some drawings by hand, other pieces made on a computer, to build the collage.

“But you had no idea that NFTs were going to exist![…] What did your wife tell you about it? Something like, “Honey, what are you doing with all these digital paintings?” […] Is incredible.”Fallon commented.

During the interview, the presenter showed the audience some of the first images he made Beeple for “Everydays“. They also commented on the artist’s most recent NFT piece, titled “Human One“, Which sold for almost $ 30 million last week.

See also  What are the reasons in favor of activating BIP-119 in Bitcoin?

Beyond the interview, which represents the first time the artist has appeared on such a massive public show identifying himself as the face behind the burgeoning NFT craze, Fallon was passionate about the trend and revealed that he had made his first investment in the space. .

He commented that he had become the proud owner of a series NFT ‘Bored Ape ‘. Fallon explained during the program that he used MoonPay to make the purchase, which he further described as PayPal for crypto. Shortly after, the The actor took to Twitter to share with everyone his new digital piece: a bored ape in a sailor outfit and heart-shaped sunglasses.

“Permission to enter ‘bored’?“, Wrote the presenter making a play on words with “Get on board” and “bored”(By the name of the collection).

Fallon’s foray into the vast universe of digital art appears to have favored monkeys. What reported journalist Colin Wu, the collection sales’Bored Ape Yacht Club‘increased by 94% after the announcement. Also another series of NFT monkeys, called ‘Mutant Ape Yacht Club‘saw a sales rebound of more than 100% after the news.

At the time of publishing, both collections remain among the top two by volume of sales in the last 24 hours, according to DappRadar. Based on Ethereum, ‘Bored Ape Yacht Club‘, or Bored Apes Yacht Club, is one of the most popular and successful NFT collections today with more than $ 700 million in historical sales volume.