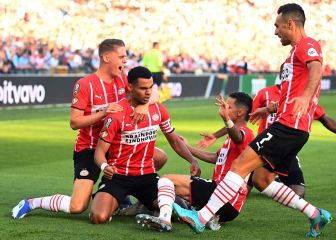 Ajax, as a club, has done everything possible to try to hide that Erik ten Hag will go to Manchester United at the end of the season but it has not helped to prevent this final from being marked by that information. The previous press conference had no other topic of conversation and the sports director confused the past with the present when he spoke of the possibility of retaining him. PSV, meanwhile, had not had a better few days having lost in the last minutes of the Europa League quarterfinals against Leicester.

Ten Hag recovered Stekelenburg in goal and opted for Brobbey ahead of Haller. But these modifications of the eleven type, who also did not have Antony due to injury, did not have much to do with Ajax’s bad start. PSV ate it up in the opening minutes and Zahavi scored in the tenth minute, but the VAR ruled it out for a centimeter offside.

The tension of the final was shown in the successive tanganas that took place in the first twenty minutes. He calmed down a bit when Gravenberch opened the scoring from the edge of the box in the 23rd minute. with a goal that shows the strength of this young talent, who may also be playing his last matches as ajacied. Very shortly before, neither Makkelie nor the VAR had not seen a penalty that seemed quite clear to Tadic.

The arbitration decisions made the fans of the capital angry again when, in 44, the VAR indicated that Mazraoui’s goal was not worth it. Tadic came back from offside on the same play and had to be ruled out.

Just after the break, PSV reacted and in what way. Those who took the longest to return to their seats after the break may have missed the two comeback goals. Gutiérrez and Gakpo, in 48 and 50, turned the final around.

Ajax wanted to react quickly but the VAR denied him the goal again. Brobbey had proved Ten Hag right in betting on him by holding his back and leaving Klaassen a free ball to score, but the young striker was offside. Then it was the post that prevented the tie after a great shot by Tadic.

Ajax went on the attack in the final minutes, but PSV’s third was closer than the tie’s second. Vertessen was the protagonist from 82, when he left. The referee forgave Gravenberch a red card for a foul on the striker and then hit the crossbar. In the discount, Stekelenburg saved a one-on-one with Bruma.

There are five games left in the league and Ajax is only ahead of PSV by four points (in addition to overall goalscoring). This final, and the announcement of the departure of Ten Hag that aims to be this week, can be decisive at the emotional level in this coming month.