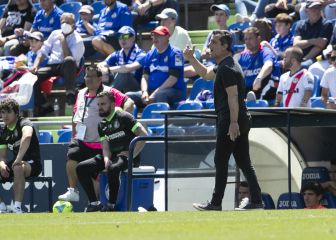 Second opportunity. How do they deal with it?

It can. It is our motto since the beginning of the season that you can. We depend on ourselves and hopefully we get points for our merits and that it’s in our stadium.

What casualties do they have?

Mitrovic is suspended, nothing more.

After so much suffering, why can there be a party at home?

Hopefully. I’m sure there will be a good start in the last match against our team. I hope we perform well. I want to thank the fans because we have felt them and they have been essential for us to have the capacity to react. We played against a rival with many virtues. There will be difficult moments in the game and we have to be patient and not get frustrated if it happens. All together we go for the goal.

What do you think that from the outside they take them for saved?

We have done something well, but we are responsible and until the math says yes, we have to give everything. The rival is going to demand it of us. I don’t know if we’ll play better or worse, but I’m sure we’ll leave everything on the field.

What can you say to the Azulona fans who have prepared a great reception tomorrow?

See also  Quique: "On Sunday we can take a decisive step"

Any. We thank you. It would not be possible to have reached this situation without having felt them close on cold days, complicated schedules or rainy days. They have been vital to get here. I am eternally grateful for the effort they put in throughout the season.

Barcelona, ​​whoever plays, has a way of playing. It is very difficult to take the ball from him, he presses well after a loss and will take us to the maximum. They play the ball well and will take us to the maximum of demand. It is not a team that is impossible to get a good result. Casualties are opportunities for others who will want to show that they can do well.

Will they know what happens in the rest of the fields?

It cannot be said that it will not happen. The environment will tell us how they are doing in other fields. We like to depend on ourselves and look at what is ours. It is inevitable and it will be known by the sounds of the stands. The important thing is that we focus on our game that requires all the attention.

I don’t sign anything, but adding takes us to the goal. We will not play to tie, but to win against the difficulties of the rival.

See also  Quique: "The season has been a wonderful experience"