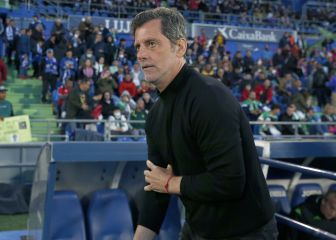 A week begins in which everything is decided. How are they?

It can be said shortly, but it is a process that has come a long way. We are happy for the perspective and how we have been adding. We have recovered solidly which is important for this group. We know that we are facing a derby where Rayo comes without pressure and we have to make our points. It will be very interesting and with edges.

Has your motivation changed after the draw with Betis?

We haven’t changed anything. Every match is a story. We analyze each rival to see what suits us. Rayo has nothing to do with Betis. We play at home again. Here we feel strong, we have our people. I take this opportunity to make an appeal because it could be a beautiful day. A derby, a Sunday when children and many people can come. Hopefully we have a great atmosphere because it could be a decisive step.

He said they wanted revenge. Do you feel that way?

We do not want to raise the spirits of the rival, but it is like that. There were teams that made blood of our position in the first part of the league. It’s normal, I remember this match perfectly, how they pushed in Vallecas to go as far as possible and I encourage mine because there is a second leg and it would be good to do our job.

The other day Soria said he was upset after the draw. Is it a symptom of a lot of ambition?

That is fantastic. We have a competitive locker room. I have known him from afar in recent years. It had a little decline, but they are the same players and they are guys who know how to compete very well. We knew that we were playing against a team that had won in Elche and Cádiz with infernal environments against us. A draw was fair and adding up is always worth it, more in a position to leave the goal at the levels we want.

Is victory decisive to live in peace?

It’s very important. We have been close to the goal for several days. We are slowly getting closer. In the last games it is more complicated to score. We think we are in the line of continuing to add. We were able to win every match.

Do they have any drop?

We have Mitrovic’s absence due to suspension and nothing else.

How will the defense recompose?

I have to think about it. Hopefully he’s right with eleven. Mitrovic and Cuenca have different conditions and will force us to make some movement in the defensive line.

If they win on Sunday, will they reveal their future?

See also  One step away from the Finalissima: The history of Argentina - Italy

It is not something that I should say and we are not preparing it. The atmosphere is very positive. Getafe wants to carry out a good project and I like serious clubs that want to give importance to pre-seasons and want to make teams to suffer as little as possible and make their fans enjoy themselves. The conditions are given, but we have in mind the goal of permanence and everything else is in the background.

Are the public and the emotional factor decisive?

Of great importance. They make it very difficult for us with the schedules. We go from Friday to Monday almost always. Everything that comes from hobby I take it for good. Sunday at two o’clock with the importance of the game, the possibility of achieving the goal… Any call from the club is a good place.

What can you say about Rayo Vallecano?

It is a team that has competed very well since the beginning of the season. They have always played well. Iraola is a coach who comes to stay with an open and fresh mind that I like. Rayo has played without complexes all year.

Jankto was injured in Vallecas. How is he now?

We have great respect for Jankto because he is an excellent professional. He ticks all the boxes to be a very interesting player. He was the best in the first part of the season. We have not found the best version of Jankto in training and he has found a rock as big as Olivera in his position. He is also limited by the system. It’s a season you’ll want to forget.

What is Óscar por Aleñá’s entry contributing to it?

In Vigo he played engaging with the two strikers and hence his assists. Against Betis we left him in the double pivot when we saw that we did not have a good day with his foot. He has that versatility. We always wonder if he should play further forward or further back. Aleñá has played with tremendous pressure and has had a very great wear. When I saw him obtuse in terms of solutions, it is better that he rest. The other day he and he entered lighter and clearer ideas.