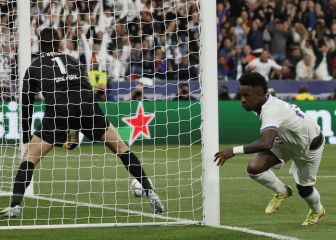 The event will have a place in posterity for heroic, unexplained, paranormal or supernatural. Or not so much if we talk about Madrid, fourteen times champion of Europe in 67 editions (one in five) and in six different decades. An imperishable legend. A winner from the first to the last day in a competition of which he feels founder and protector. A triumph junkie who did not win any of his cups for bringing together a great generation, who alsobut educated each generation, regardless of its quality, in victory: Di Stéfano, the Yeyés, the Garcías, the Vulture and Ferraris farms and the long saga that started in Cristiano and inherited Benzema. Different soccer players with identical demands. In Paris he liquidated Liverpool, the last skyscraper, with a goalkeeper for the legend, Courtois, and with an irreducible troublemaker, Vinicius. Only Bayern was missing to lift the five-point cup. With four, it will be the most valuable ever. The merit of this team is that their faith was even above that of their fans, which is saying something.

The party came from behind. An organizational blunder caused the total collapse in the access area for Liverpool fans and the start had to be delayed for more than half an hour. UEFA owes an explanation. That forced a double warm-up of the teams and cooled down the stands. The final deserved something else.

Cold also started Madrid, caught up in that blaring pressure from Liverpool, a team that takes advantage of all the time and all the pitch. There is no respite. Ancelotti’s group was waiting for him, whose first message in the game was to look long for Vinicius and Valverde, the team’s Swiss army knife. A game of chance that demands extreme precision. The truth is that he did not slip neither one nor the other: Madrid did not incur fatal losses, Liverpool denied all the sprints of the white wingers with an excellent Konaté as a correction factor. He was Vinicius’ true sentinel.

all until Liverpool decided to go one step ahead, threw the ball on their backs and launched into the tackle. In five minutes he forced four saves from Courtois, two of them exceptional, in point-blank shots from Salah and Mané. This one played glove and stick. It was the night of the Belgian. That’s when the white team found out that networks are made of titanium: strong but light.

Madrid was immersed in the perverse dynamics of the Parque de los Príncipes and the Etihad. No one has skidded so much in this Champions League, although he always ended up getting back on track. His only mission, very minor, in that section was to take shelter. The thing was going to subside more than to reply to Ancelotti’s raised eyebrow, to lower the volume of the match because the rhythm proposed by Liverpool was beyond the reach of Modric and Kroos. That did make it. After half an hour that Liverpool fire seemed half extinguishedalthough he was not able to stop the bleeding of an impeccable Alexander-Arnold, a full-fledged assault winger.

The report of the first half He spoke of a heroic Courtois and an unprecedented Alisson, a very adverse scenario for Madrid without translation on the scoreboard. The team was still afloat for the application of his defensive quartet: powerful wingers, very attentive Alaba and Militao. And in those came one of those CSI plays. Benzema found himself alone against Alisson, who closed him off, screwed up the back pass, Valverde arrived, Fabinho went to the cut, the Brazilian touched the ball with a knee at ground level and the ball returned to the Frenchman, who scored in an illegal position. The VAR took four minutes to determine if it was a rebound, which invalidated the goal, or clearance by Fabinho, which legalized it. From the cabin they put out a red flag. White would also have been acceptable. The debate about the disallowed goal will last for a long time. The Madrid fans cried out against Ceferin, who has had better days.

to suffer is to win

The shock didn’t change the game. Liverpool continued to be accompanied by strength and Madrid, Courtois. The natural thing was the English goal and the supernatural, what happened, what has happened throughout this Champions League of miracles. Modric saved the first pressure of Liverpool, the ball reached Valverde, he traced a diagonal and his strong pass pushed Vinicius into the net. That is Alexander-Arnold’s Achilles heel: too much happens behind him. A goal in the middle of nowhere. Madrid is also unmatched in that. Don’t give him a bullet.

After the hugs came the thorns, extreme suffering. You don’t win a Champions League without having a bad time. Madrid has saved enough for the next fiveco editions. Courtois saved Salah two left-footed shots, the RAF bombarded the white area, Casemiro missed a tremendous chance due to a lack of tact in his left foot, Klopp emptied the charger of the changes (Diogo Jota, Keita, Firmino…), Ceballos lost the opportunity to enter history in the discount… That was the final, with Madrid camped in his area, but alert at exits. An exercise in resistance that took him to the Fourteenth grabbed an exceptional goalkeeper, to an incomparable coach who already has more Champions than anyone and to a team protected, in equal parts, by his spirit and by the fairies to write the feat of feats.

See also  Approved and failed for Madrid against City: Benzema-Vinicius, the couple of the year