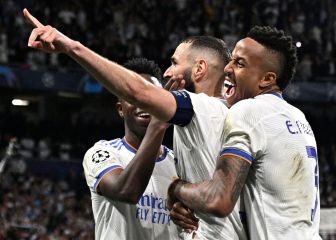 There is no one who can resist the destructive power of the Bernabéu, perhaps because it is not of this world. Like PSG, like Chelsea, like so many before and like so many to come, Manchester City, Guardiola and all the Asian luxury that surrounds them melted before a fierce Madrid, eternally resurrected, in permanent defiance of Murphy’s Law: here the toast falls on the butter side less than anywhere else. “Something happens in this stadium”, Butragueño, worker and spokesman for miracles, has been repeatedly heard. It happens a lot, I should add. And he also spent this time looping the loop to lead Madrid to another final of his Cup.

Even at home, even enlarged by an erupting stadium, even required by the disadvantage of the first leg, Madrid forgave the third striker, Rodrygo, to keep warm with a fourth midfielder, Valverde. It was an implicit a posteriori confession by Ancelotti: he was overly optimistic at the Etihad. Guardiola, on the other hand, improved the plan: the same attack front and the two starting full-backs that were missing in the first leg. Not one step back. In short, the same idea but a different game. Madrid made their first foul at the Etihad in the 40th minute. At the Bernabéu, Carvajal committed it at 18 seconds. All nerve and heart, says the hymn.

As emotional as they may be, the comeback attempts have an instruction manual, which Madrid tried to follow to the letter. On the way out, he took the initiative from City, a conqueror in his own way: he doesn’t shake but he submits. And he left some footprints in the Ederson area. Two shots from Benzema, specifically, without any aim, a rarity so far this season. City played with time and put themselves in the hands of De Bruyne, that Belgian that one finds anywhere on the field. His was the first shot of his: a powerful left foot without any placement. And his was the first decisive pass, to Bernardo Silva, his best partner for almost everything, who met the impenetrable Courtois of the whole year.

Those two actions by De Bruyne marked the first wind change of the duel. City pressed up and cooled the general enthusiasm of Madrid. That patent does belong to Guardiola, getting a group of virtuosos to become a herd of recuperators. Here it has taken six years and it has cost the sheikh a billion.

In any case, the game had little to do with the Etihad, that party that was experienced in both areas. Madrid protected themselves better and City had taken note of their neglect in the withdrawal, but both of them lacked something. And furthermore, Walker did not pass Vinicius one with two very powerful weapons: speed and experience. He knew when to sprint him and when to wait for him.

The game went to rest without an owner. It came and went, but it did not break, because Madrid was still contained and because City was walking with the fly behind its ear in a scenario so prone to the supernatural. Something must have smelled.

The second half began with a flash and a wail. The center kick ended in a Carvajal center that Vinicius, with Ederson defeated, kicked out. It all happened in ten seconds and ended badly, but that lightning attack reminded Madrid that they could. A pity that the minutes of effervescence remained in the almost. Everything started or ended in Vinicius, that storm that breaks out without warning. He lost two controls when he had his finger on the trigger. The same thing happened to Modric, who did not dare to finish off a good shipment from the Brazilian first. Walker suddenly had Vinicius on top of him. When they changed him he must have been relieved.

City were starting to use the ball in their own defence, burning through passes and minutes at almost the same speed. It was the time of 4-3-3 and Rodrygo, a disturbance on the right, but Madrid’s moment seemed to have passed.

An oversight in the center of the white field opened a huge corridor for Bernardo Silva, the party leader. He attracted everyone’s attention and ended up opening the pass to Mahrez and he shot Courtois with his left foot. Ancelotti tried it with what little he had left, Asensio and Camavinga. Kroos and Modric were no longer on the field, flags of a generation that is beginning to leave gloriously. And then later than never the paranormal became normal again. Mendy saved a goal from Grealish on the line and in three minutes Rodrygo scored two goals and was able to score the third. That unbreakable City jumped to pieces, victim of a phenomenon as repeated as it is inexplicable. The stadium began to levitate on the way to an extension that caught City without De Bruyne, Mahrez and Gabriel Jesus. Guardiola had seen himself as a winner before his time, a capital sin in this stadium.

Burnt by the situation, Ruben Dias gave Benzema a penalty that he converted. For the first time, Madrid was ahead in the tie on the back of Camavinga, the light cavalry, the hero of the final rush. The rest was conviction, resistance and luck (Fernandinho still doesn’t know how a goal went to an empty goal). Comebacks are made of that material. Madrid is made of that material, eternally a finalist.