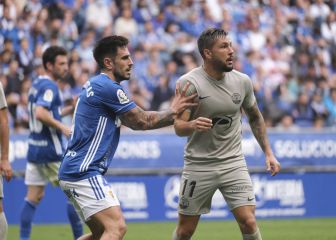 He threw Oviedo from the heart until the end and took the prize. But it was a prize without a jackpot. Because what she was looking for, the promotion play-off was not possible. He was to win the Ziganda team and wait. He fulfilled the first, but the news from other fields failed. The blues knew that they did not depend on themselves and in the end the defeat last week in Las Palmas was the final sentence: once again Oviedo was left without a play-off. This time she was closer than ever.

Oviedo had a plan: score fast. It was the most effective way to put pressure on Girona and Las Palmas to steal a play-off spot from them. Therefore, he went out to the grass ready to quickly solve his work. Obeng had already hit the Balearic goal after two minutes, but started offside. He kept pushing the Oviedo. Bastón did not reach a dangerous center by Viti and again Obeng tried in the area.

The Ibiza resisted as best he could and only stretched with a left foot Claveria who left near the Carbayona squad. He had to try the Oviedo then minute 18. This time with a prize. Brugman looked for Borja Sánchezwho gained position from the defender and avoided Dominguez with a subtle Vaseline.

The goal, then yes, relaxed the blue spirits, aware that they had fulfilled their part of the script. Now it was time to wait for other fields. Ibiza took control of the game, although without bothering an Oviedo that withdrew ranks at any time.

women he only had to intervene just before half-time to drive a dead ball out in the box. The feeling at the end of the first half was that Oviedo had the match exactly where they wanted.

After the break, the game started happy. Those from Ziganda wanted to sentence but they found a scare. One of the fat ones. Claverías put pressure on Brugman in the area and stole the ball from him. The next thing was to send the ball to the net.

But Oviedowho was still in the shock, responded immediately. Mossa crossed and scored the usual. Bastón’s 21st goal was a striker; control and auction to the net.

The party continued lively, spurred on by refreshments. He had to hit the visitors. It was Davowho played for the Oviedo subsidiary at the time, with a subtle touch that surprised Femenías. He was able to repeat the attacker at 78, but Femenías responded with a spectacular hand.

The last impulse took the blues towards the area of ​​the Ibiza. In one cross, the ball went into the arm of a visiting defender. The VAR saw the penalty and Bastón took the opportunity to leave his account at 22 goalstop scorer in the category with Stuani. But it was insufficient. The jackpot didn’t hit this time.