Uber and Twitter had shown the way, changing their computer park for all new laptops from Apple: the MacBook Pro M1 Max. In the continuity of the two American companies, it is now the teams of the famous social network Reddit who have decided to take the plunge and go to Apple.

Jameson Williams, chief engineer of the network’s teams, explained in a series of tweets that this decision was in no way a gift to Apple with this large-scale order, but simply a question of profitability. Thanks to the technical capabilities allowed by the brand new chip from the Cupertino company, these new MacBook Pros provide all the power necessary to accelerate the development and engineering of the social network.

A profitability calculation, nothing more

Still according to Williams, this purchase should therefore be very quickly profitable, he who estimates that his Android developers could save about 22 minutes each day. Valuable time for Reddit, which claims that the MacBook Pro M1 Max, bought in their most high-end configuration, are able to halve the time it takes to complete a clean version of the repository.

According to him, and based on a hit for a skilled software engineer of $ 150 an hour, this purchase of brand new hardware should pay off quickly. According to internal company data, engineering costs in 2023 would have exceeded $ 200,000. While with this new model it should therefore remain below this $ 200,000 mark, as shown in the diagram below. 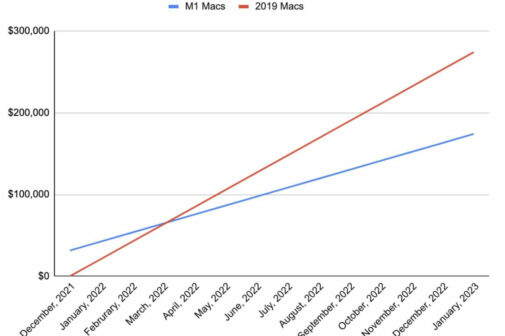 According to Williams the hit of these new MacBook Pros would be nearly $ 31,000 for nine people. Still according to his profitability calculations, he estimates that this could be reimbursed in just three months thanks to the technological progress brought by Apple within its machines.