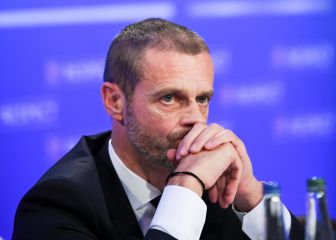 The new Champions League format, which was announced last year with 36 teams and more games, will come into operation in the 2024/2025 season. UEFA continues to outline some important details. One of the main novelties will be that there will be no groups, but that everyone will play against everyone in a Swiss format.

Besides, as announced by the Times, it is very close to confirming that there will be a Final Four every yeara project called Soccer Week that it would be played in a single city and a single match between the four semifinalists. In this way, there would be no return match or local or visiting teams in the matches that give the right to play the grand final.

UEFA valued this format from the beginning to decide the Champions League champion. In fact, was very satisfied with how the forced experiment with ‘final eight’ in Portugal in 2020 turned out to be able to conclude the competition in the year in which the pandemic exploded.

Since then it was seen with good eyes to play in a single city the matches that settle the title. Ceferin said a few weeks ago that there would be more news in about a month. During the Congress held by UEFA on May 11 in Vienna there could be important news in this regard.

See also  Satellite network confirmed on iPhone: why it's a revolution

Although playing two fewer semi-final matches means lower television income, moving all the matches to the same city means significant benefits for the localities that are chosen as the venue. In addition, the clubs look favorably on making the outcome of the tournament more dynamic and that can also attract more interest. At this point, relations between the ECA (Club Association) and UEFA are very importantor what is the same, between Nasser Al Khelaïfi, president of the first body, and Aleksander Ceferin, president of the second.