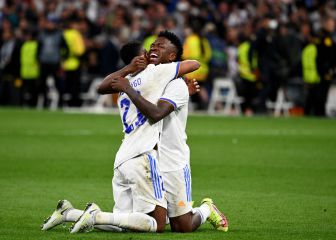 Real Madrid had a new magical, epic and miraculous night to sneak into the Champions League final in Paris. When few already counted on the comeback, Real Madrid got into extra time with two goals from Rodrygo in two sparks between the 90th minute and added time.

The Brazilian was key from his entry and lethal in the Manchester City area to give his team an extra life. In extra time, Rubén Dias ran over Karim Benzema and it was the Frenchman himself who executed the penalty that ended up qualifying the white team by winning 3-1 in Santiago Bernabeu.

After the emotion experienced at the Santiago Bernabéu, everything went through the analysis of El Sanderín in El Larguero on Cadena SER. For Romero, it was the ‘children’s school’ of the Real Madrid first team that won the ticket to the final. “”Today Real Madrid scared City with the first goal. The children have overcome the game: Vincius, Rodrygo, Camavinga, Valverde…”, assured the journalist from Cadena SER.

For Pedja Mijatovic, hero of the Whites’ Seventh European Cup, this squad marks a new era. ““What a show; unrepeatable. This generation is marking a new history of Madrid. Immortals, it is something unrepeatable. After the goal the beast wakes up and things end as they do. It has not been luck. It is something that has no explanation ¿What will the City think? The same that those of Liverpool have to be thinking”, he sentenced.

Jesús Gallego, for his part, believes that it was the footballers who decided the match for Real Madrid and considers that Guardiola was better tactically than Ancelotti. “Ancelotti has lost to Guardiola today. He has made the changes late: the midfield was dead. Guardiola, with the changes, was beating him. For me, I had to have put Camavinga in before and Ceballos before,” he argued.