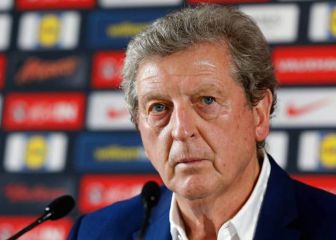 Up to this point. After managing 16 teams in eight different countries, and leading the teams of Switzerland, United Arab Emirates, Finland and England, Roy Hodgson has had enough. The Londoner did not have a brilliant career as a footballer, he spent all of it playing in the lower divisions of his country. But ever since he took charge of Sweden’s Halmstads BK in 1976, his has been a recognizable face on the bench. Especially after his time with the English team and after having established Crystal Palace in the Premier League.

Four years he was at Selhurst Park, which seemed to be his last bench. He left it at the end of last season, but returned this season. He took over from Claudio Ranieri at Vicarage Road to try to avoid Watford’s relegation to second. Crystal Palace itself could pass sentence, since any result that is not a victory for Hodgson’s men will mean the fall to the Championship.

On Wednesday, Roy Hodgson received a CBE, the highest award of the Order of the British Empire for services to English football. After the ceremony, held at Buckingham Palace, the coach made clear his intention to leave the world of football.

“I have enjoyed the time that I have dedicated to this work, it is a very demanding world,” he explained. “Obviously, I made it clear to Watford that my contract had to be short-term, until the end of the season. I had retired, but I came back to dedicate myself specifically to that work. Now that it’s almost over, unfortunately, I don’t think I should be interested in living more stories in the Premier League. I think I have earned the right to take a step back, to enjoy the free time and to spend more time with my wife and son.”

Throughout his 45 years on the bench, Hodgson has coached 20 teams, including four national teams, and although he spent the most time in England, he is also remembered in Italy, the United Arab Emirates, Sweden, Denmark, Finland, Norway and Swiss. He left the Swiss country especially good taste, which he led in the World Cup in the United States in 1994.

But not all of their experiences were positive. At least that’s how Roberto Carlos remembers it, the former Brazilian defender spoke on his day about his experience at Inter with the English coach, being very harsh with his management. “Roy Hodgson destroyed me. He made me play in the center of the midfield, I was not going to have the opportunity to play like that for Brazil and there was a Copa América in 1997,” says Roberto Carlos. “We didn’t get along badly, I just didn’t know about football”sentenced the Brazilian.