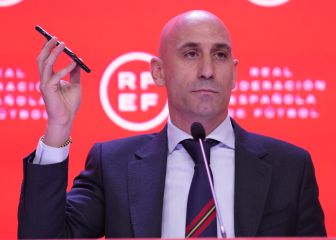 Luis Rubiales has returned to give explanations for the controversies arising from the Super Cup Files. LThe audios and documents leaked to the press after his mobile and computer were hacked. Among the information published, and denied by the RFEF, was the espionage of David Aganzo, president of the AFE union, and the recordings of ministers and members of the executive of Pedro Sánchez, of whom he stored conversations according to El Confidencial. The Government, through a letter from the president of the CSD, asked Rubiales for public explanations. ANDhe president set them for this Assembly, where he has spoken before the representatives of Spanish football without the presence of the media.

“We understand that when there is no content, a breeding ground is created that generates expectation and popular disapproval. They want to generate a lot of noise when nothing can be extracted or criticized from management. The Super Cup has been a salvation for modest football. We have gone from 120 thousand euros to 40 million euros. That is the Super Cup”, affirmed Luis Rubiales in his explanation to the Assembly.

Before the assembly members he showed his chest for his management: “We have multiplied the amounts of income for competitions. They have gone from 13 million to 47.5 million euros. In the profit and loss accounts we are facing the best numbers in history. 32 million euros of profits that we will dedicate, as you voted, to a contingency plan for the future. A very successful balance with a management model that makes us a benchmark and that fights face to face with the English”. And he adds: “With these numbers, the tactics are the same as always. It is played within the Federation, to employees within the RFEF. Passing information illegally. It is incomprehensible that these things happen in our country and with these numbers.”

He also wanted to clarify the other options he had to take the Super Cup and deny that there was a firm offer from Qatar: “About the possibility of having taken Qatar and that it was said that we did not take it because we were more interested in another contract. The falsehoods are difficult to defend them. There was a proposal from Qatar, for 33 million, and it was not perfected. After a few days they did not give the go-ahead and there was no offer. There was no firm offer. If they had accepted it, we would have left. It wasn’t the best deal. It creates a debate about something that is not true.”

On the trip to New York, Rubiales explained his version: “The RFEF covers a trip for three people who work in the Federation. One of them is me. The Federation does not cover anything else. It is a business trip with fully accredited meetings. So if someone wants to lie, they will. A rumor has been created about something that is false and with a mutilated document to make it appear that I am doing this trip alone. I am accountable to the Assembly for my work, not for anything else.”

“There is no conflict of interest for Piqué”

Tomás González Cueto, who handles the Federation’s legal affairs, gave explanations about Piqué’s involvement: “The Saudi side hired Gerard Piqué’s company Kosmos. The Saudi company signed an intermediation contract with the commissions that freely agreed. Those commissions were paid by the Saudi side. The RFEF has not paid and will not pay any commission for this contract.” And he added: “HThey talk about conflicts of interest. I have reviewed the Spanish and European regulations, I have not been able to find a fit for that alleged conflict of interest that is attributed to Mr. Piqué. There is no conflict of interest in Piqué’s case.”

See also  Murthy: "I told Rubiales: 'What the hell am I doing here?', and in the end the whole green field"

He also wanted to talk about the controversy that arose with the Ethics Committee, which, according to information from El Confidencial, were against: “The Ethics report is in favor of the Super Cup in Saudi Arabia as long as women are helped. There are members who have said that they did not see the contract, I do not know, but I do know that the conditions that women can go freely to the stadiums were reflected.

Camps: “No cent has been used for espionage”

Andreu Camps, general secretary of the RFEF, wanted to defend the management of the institution in the face of complaints to the Prosecutor’s Office and the Government: “This year only in calls for aid we have obtained 90 million euros. All these grants have been obtained in public calls. We have given help to more than 5,000 footballers, more than 1,500 clubs… There are some payment commitments during the year. There is not, and we are not aware of, a single complaint or claim from a club or athletes who, being entitled and presenting the documentation, have not been paid on the scheduled date. We are talking about 90 million euros. Not a single claim.”

The secretary general also wanted to deny the accusations of espionage: “The aid received by the Federation are finalists and every penny is justified. No money has been earmarked for espionage. Not a single public or private RFEF. In case anyone has any questions. The Federation has nothing to do with this issue“. And he adds: “If any employee, in a personal capacity, had done it, they will be the ones who must respond. The Commission of Inquiry is doing its job. When they have their conclusions, they will be made available to the judicial bodies.” In addition, I underline the difference between LaLiga and the RFEF in pool aid: “LaLiga receives ten times more public aid than the Federation. We receive 1.6 million and another 16 million. LaLiga allocated more than three million euros to improve the development of the competition. The RFEF cannot allocate 1.6 to promotion and development activities, only for the stadiums.”

Camps also wanted to clarify a report that LaLiga leaked to some media in which the money that the clubs gave to the RFEF was indicated: “The Federation pays the clubs of LaLiga 7.3 million euros more than what the clubs give to the RFEF. You cannot make them see the opposite and lie. The money is positive in terms of the RFEF with respect to the clubs”

Alejandro Blanco, president of the Spanish Olympic Committee, spoke at the Assembly of the Spanish Football Federation to show his support for Rubiales and the work of the institution: “I congratulate Real Madrid. Seeing them win the 14th is impressive. I’ve seen the respect, the admiration and affection that UEFA and FIFA have for this Federation and for Luis Rubiales. I express my support for Rubiales and his team. Let there be no doubt. I have my confidence in him. The world has evolved enormously. The child or the girl, the head coach, the club. Football has been lived with passion since childhood. There are territorial federations for that. We have the best coaches, players, referees. That is the structure of the Federation. There are many who work in the anonymity developing the best football. I admire the unknown coaches who manage to bring out great footballers every year. This Federation has a past and a future. The most important thing is what remains to be achieved and that is e can be achieved by working together”.