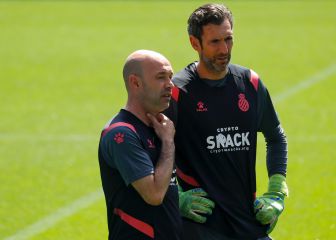 It is his second game with Espanyol. And the last. At least in the near future, since the sports management is looking for a new coach and Luis Blanco will return, if there are no unexpected turns, to the subsidiary’s bench if they reach the promotion final. But I don’t want the coach to leave with a bitter aftertaste. I want a competitive team that makes things difficult for a Granada that is at stake to be or not to be. Not so much Espanyol, which is settled between fifteenth and twelfth position.

The Granada and its situation. “We also play a lot of things at the classification level. Playing in the First Division is a lot. We know that we will have a lot of difficulty because they are playing for something specific, for which they have been fighting all season. Beyond the reality that exists. We wear a shirt centennial and there is a classification in between. We want to win”.

Virtues of Granada. “In recent days, with the arrival of Karanka, he has taken a step forward in intensity and playing in the opposite field. It is well structured, it is clear to him. They have simplified and got it right, because the results are good. At the point level they are better. Last week they almost tied Betis. I expect a Granada with a plus for its people, with that encouragement. We will have to be calm, compete individual actions and be more practical. We want to compete, win and play well. We have to counteract his energy with the ball and threatening them.

Mentality. “The week of work was very good and positive, they gave me good feelings. The players tell me that they want to win in Granada. We will compete well if we train well, and in that sense I see that the message has got through”.

tactical changes. “Against Valencia we did things well, there was a lack of verticality. We tried to improve what was good and work on two or three game situations that could arise”.

The affiliate. “All the boys are with the subsidiary and in principle we will not take anyone. It may be that one of them enters the call, but it may be that they are not from the subsidiary. The B players have tremendous enthusiasm, they are working very well with Corominas. There are to give him maximum energy. I’m sure it’s going to go quite well, the boys are ready”.

Changes without RdT. “There won’t be a revolution, maybe there will be some change. I’ll put in the ones that best suit the match. We all want to win and we’ll put in the best line-up. I like to choose the best based on what I expect from the match.”

The lows. “Keidi, Manu Morlanes and Pedrosa did not arrive. Óscar Gil has started with the group, he can go, but it is difficult for him to play”.

See also  Llorente already fell in love with Ancelotti, who wanted to take him to Naples

locker room environment. “I did not have a previous perception. I have spent ten days and I have focused on work. I have to say as a coach that positive things have been transmitted to me. The dynamic was good, but we did not prepare the week as if it were a Champions League final. It leaves me quiet for the weekend.

Differences between B and the first team. “There are differences. The first day you enter the locker room you have the feeling that they have to believe you. And the perception was positive. Here there are many things already established, there many things are acquired, you have to adapt or adapt to them; in grassroots football you generate the habit. It is more difficult for the message to get through”.