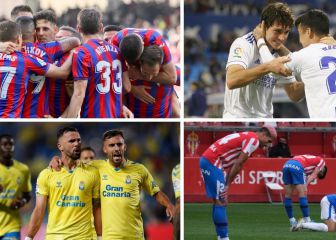 The Second Division season is being truly crazy and the end of the regular phase, before the playoffs, will not leave anyone indifferent. It has all the ingredients to be epic. When there are only 5 days left to play, that is, 15 points to distribute, everything is yet to be decided. Without a clear leader, with the playoff positions still undefined and with relegation that could turn a corner, all the teams (except Alcorcón, which has already relegated to the First RFEF) have a lot at stake in these last few games. Here we leave you what is at stake in this final stretch.

At the momentEibar and Almería occupy the positions of direct promotion, but everything can change in the next games. So much so, that if the armory group is not 100% assured of the playoffs, since they are separated by 14 points from Ponferradina, which occupies seventh position. Of course, this is very difficult for it to happen since it would be Eibar’s worst streak so far this season.

Those from Garitano and Almería, together with Valladolid, which is one point behind the Andalusian team and two from the Andalusians, are the three teams that have the best chance of going up to the First Division directly. But, if we refer to the numbers of the classification, Tenerife, Girona, Oviedo and Ponferradina have options to ascend directly. As long as they add up all the remaining points and the top teams fall down.

by calendarAlmería is the team that has more favorable matches, since it does not face direct rivals in direct promotion. Of course, Rubi’s men will play only 2 of the remaining 5 games at home. For its part, Valladolid will face off against Eibar (That game could be fundamental both for the result and for the mood), Ponferradina, Ibiza and Huesca, all with options to enter the playoffs. Finally, Eibar will play most of the matches (3) at home and will finish the competition, where everything can be decided, against Alcorcón, a team already relegated.

Valladolid, Tenerife, Girona and Oviedo are the four playoff teams in the absence of these five days. But all this can change. From Eibar or Almería, who may lose their direct promotion positions, to Mirandés (16th) who with 46 points still have options to enter promotion, there are 16 teams fighting to enter the promotion playoffs.

Such is the equality that exists in this competition, that there are several teams with options to play in the promotion that cannot be neglected, since mathematically they are not saved from the burning of the First RFEF. These are Zaragoza, Ibiza, Leganés, Lugo and Mirandés. These teams have options to move up the table to the playoff spots or they can go down to the underworld of the bronze category. That yes, the options of giving this alternative are very remote, since very positive streaks of the teams below and debacles of the clubs that currently occupy promotion positions must be combined.

Despite the fact that mathematically there are 16 teams with options to play this coveted playoff, they are, apart from the four teams named at the beginning, Ponferradina, Las Palmas and Cartagena, which are 3, 5 and 8 points behind Oviedo respectively, that marks the limit, the teams that have the most options to enter this promotion, to the detriment of Valladolid, Tenerife, Girona or Oviedo. They cannot fall into relaxation, because throughout the season it has been shown that coming back 5 or even 8 points is relatively simple, since the equality is so great that the fact of adding two positive results consecutively makes hitting a rise in the table.

Alcorcón is already a First RFEF team and Fuenlabrada is on the brink of the abyss and a defeat would consummate their relegation. The other two positions that lead to hell in the First RFEF are occupied by Real Sociedad B and Amorebieta, who, barring a miracle, will return a year later to the third category of Spanish football. Both teams have 34 points and see salvation, marked by Málaga and Sporting, at 7 points. A special case is that of the Asturian team, which has deflated throughout the season, where it came to lead the competition for four days and now looks askance at relegation. In fact, his poor run of results, two points out of the last 12 possible, makes Sanse and Amorebieta see possibilities in his salvation. Of course, the task seems complicated, since winning three games in a row is almost heroic in this competition.

In short, everything to decide in Second. What is clear is that five frenetic encounters await us with thousands of combinations and possibilities that will make this season finale something historic. Will things change much in these five days? Get ready because curves are coming.