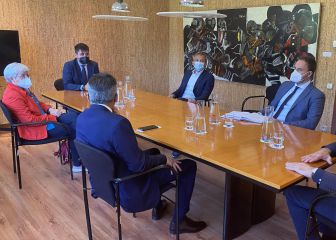 On February 4, the Congress of Deputies carried out a labor reform that the Government hoped would benefit several million Spaniards, but soccer players were not among the winners. The labor regime for athletes is included in Royal Decree 1006 of 1985. A law that has been in force for 37 years and has not been renewed since then. For this reason, from the AFE union they want the Government to update the rights of soccer players to reality by 2022. “It is a lack of adaptation to the current reality. The reform that the Government has carried out has meant protection for the consolidation of labor relations, but that has not reached sport“, affirm from the union.

“The world of football was always a pioneer in changing regulations that affected athletes. There were important strikes by footballers because they were not recognized as workers in the 1970s. And until the 1980s there were no regulations and Real The decree came in 1985,” explains María José López, a lawyer for the Association of Spanish Soccer Players, about the birth of the law. “The Royal Decree has become skeletal and outdated for the current reality. From AFE we are talking with the Ministry of Labor and the Ministry of Education and Culture to change it”. And he adds: “Now there has been a labor reform and that does not affect any athlete. That is not normal. In the sports field, relationships are of a certain duration. No one thinks that they are going to spend their whole life as a professional, physically you cannot. The 1006 enters to regulate the conditions of the athletes, the work and service contract that is also charged by the approved reform, it is the usual contract in many categories and does not affect them. There are issues that are substantial and that we understand must be regulated in the society of 2022. It is outdated in matters such as maternity, conciliation, compensation… The 1006 is like the Workers’ Statute. There is a special relationship because there are characteristics that only occur in sport and in no other workplace.”

From AFE they intend to incorporate and adapt several concepts that have become outdated. They want to talk about equality, family reconciliation, courses and training to be prepared for when the boots hang up, temporality, etc. “In 1006 there is talk of being on trial for up to three months and there are six-month contracts. That must be modified. The trial period should be about 15 days. We have already included it in the labor agreements, but in many sports labor relations there are no agreements and they pay attention to what the 1006 says, which is three months,” says María José López. “You have to clearly define what is a professional sport, a salaried, self-employed athlete, image rights, freedom of expression, which is another taboo subject that is often limited in contracts.”

Another reason to update this law is to put an end to black payments in non-professional categories. “There are many undeclared labor relations and there is a lot of money in B. If we do not regulate it, we do not bring out many labor situations that are hidden. It should be regulated. The Ministry of Sport and Labor must agree. The Ministry of Labor should lead it more so that it comes to value labor issues than Cultural and Sports, which do not have that idiosyncrasy.” And he continues. “There are clubs that say they would disappear if they register their players with Social Security. We can establish a type of quota that is intermediate. But the important thing is that they are discharged. When the ERTE, luckily all the girls of the First Feminine were discharged. Many athletes went home without being paid. We are talking about the vast majority of athletes in this country. When people talk about sport they only think of the rich footballer, but there is a vast majority of workers in the world of sport who have been practicing it for thirty years and have never contributed for it”.

One of the rights that workers have and that is hardly seen in football is paternity leave. It is very rare to see a footballer leave his team for a month because he was a father. “It’s funny that it’s a taboo subject. When it happens, it is brought out as something new, as something strange. That means that there is a long way to go in the sport with everything that has to do with that reconciliation. It influences that they have very short contracts and at very young ages. All people have the right to create their family and to benefit from the legislation that so much protects family conciliation. De Gea did take paternity leave at Manchester United, but it is unusual. Sometimes we put it out as something strange and negative towards the player. It is part of the rights of any citizen. It is a social policy. To be able to have a family and reconcile that activity with the professional one. Those are the improvements of the welfare state”. And the lawyer continues: “Parental leave is mandatory. Tell a team that one of their players is going to be several weeks without playing football. He would drop the country if he does. Would the labor inspectorate come in if he doesn’t? He is bound to do it. In this country everyone wears the medals, but there is a legislation from the year 85. There are other media sectors that have been changing, but in sport it has not happened “.

AFE has already sat down with different political parties and they aspire to modify the Decree Law before the end of the year. “We have met with PSOE, PP, Podemos, Ciudadanos, Vox and some nationalist parties. The reception is positive. The issue of 1006 is fundamental. We have sent the document to the Ministry. The political groups have told us that the amendments seem quite adequate and that they were going to incorporate them. This law goes with the COVID funds and it is supposed to come out this year.”