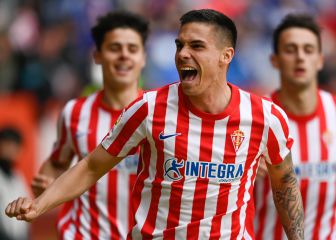 Very good first part of football in El Molinón. ‘Pitu’ Abelardo’s team came out very focused for the game and put up a fairly high line of pressure to drown Girona when the ball came out. The first goal would come from a corner kick that Gragera anticipated to make it 1-0 with a header. Girona grew in the game, got closer to Cuéllar’s goal and Stuani scored the equalizer after a VAR review. Girona kept trying, but at the stroke of half-time Djuka put the Asturians ahead again to give minimum advantage to rest.

The second half had several occasions and very distributed between the two teams. Girona was looking for the equalizer, but Sporting managed the minimum income very well for much of the second half. The Asturians looked for the third and it was a daring team. Girona tried to find spaces between the local defense, but Abelardo’s men made it really difficult for them. Stuani had it at the end with a header in the small area, but Cuéllar was very attentive to avoid the tie.

A very important victory for a Sporting that sees relegation further away and leaves Girona with the same points as Oviedo and Las Palmas. What has changed the face of this team Abelardo…