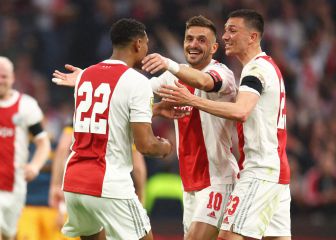 Ajax have been proclaimed champions of the Eredivisie for the third consecutive season after beating Heerenveen 4-0. Erik ten Hag’s team needed to win or simply improve PSV’s result in order to mathematically close the title.

The match did not have much history and served more as a celebration party after the Amsterdam City Council did not allow the party in the usual square due to lack of security personnel. Besides, the stands were able to applaud Mazraouiwho, at the end of the game, said goodbye: “I have been emotional when they have changed me. I have played 17 years for this club. This is my last game at home. I love these fans and I love this club“. He leaves for Bayern Munich.

The scoreboard was closed in the first part, with a goal from Tagliafico, who also said goodbye; another from Berghuis, who took the opportunity to vindicate himself in the celebration after several games as a substitute; and another from Haller, to whom Tadic gave the penalty. Aware that the three points were already theirs, in the 70th minute they began to light flares and launch fireworks from one of the ends. In the final minutes, Brobbey continued to take advantage of the minutes and scored a mistake by Daramy at will. Later, Edson Álvarez joined the party as all of his teammates prepared to jump onto the field and celebrate the title.

In this way, Ajax wins its Eredivisie number 36. It is the most successful club in the country with twelve more championships than PSV. Besides, everything indicates that Haller will finish the season as the top scorer in the league (with 21, he beats Van Wolfswinkel, Pavlidis and Openda by 5 goals with only one match to go) and Tadic as the top assister (with 18, he beats Gakpo by 6 , PSV).

To achieve this title, Ajax has maintained an enviable regularity, especially until February. With the arrival of the knockout stages of the Champions League, the club chained two consecutive games without winning (visits to Benfica and Go Ahead Eagles) and a major game crisis that they managed to overcome without losing more points.

In recent days he has also suffered more than expected to get some games, such as the visit to NEC in which he won in the 88th minute thanks to Brobbey, a very important addition to the winter market. Long-term injuries to Lisandro Martínez, Gravenberch and Antony have done a lot of damage in this final stretch.

One of the keys has been to have won the two direct confrontations with PSV, their immediate pursuer, by a resounding 5-0 in the first leg and 1-2 in the second leg. Ajax have also earned a hypothetical tie on points, beating PSV’s overall goal difference by 32 goals. The rival that has choked him the most is AZ Alkmaar, who beat him at home and with whom he drew last day.

See also  Inocencio Arias: "With a corridor or without a corridor, Madrid is not going to get Versaillesque"

Last Sunday was a key day for the title. Ajax drew first against AZ Alkmaar and offered the PSV the possibility of being only two points from first place if they beat Feyenoord. Roger Schimdt’s men were winning 1-2 until the 94th minute, when the referee signaled a penalty for Mauro Junior’s hand.

PSV complained a lot about that decision that practically left them without options to fight for the title. The Federation, the KNVB, through one of its spokesmen recognized that “We have come to the conclusion that the penalty should not have been called and the VAR should have reversed the decision, we understand PSV’s anger”.

Feyenoord goes to the Europa League and PEC Zwolle, to Second

Apart from the title, what has also been decided mathematically is Feyenoord’s direct qualification to the Europa League. Those from Rotterdam finish third.

In addition, the PEC Zwolle already knows that it will play next season in Second division after falling at the home of Sparta Rotterdam, who will fight for salvation on the last day.