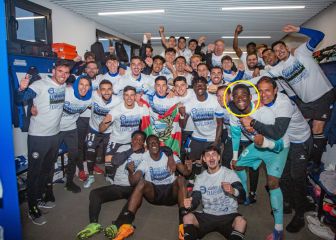 Times are not good for Vitoria. As much as the club, the coach and the players insist on sending messages of encouragement in the face of remaining in the First Division, the truth is that the fans have lost confidence in Julio Velázquez’s team. Mathematics still show options to stay but the sensations are different.

In the meantime, The good news arrives on other fronts of the entity. Mikel Crespo’s Gloriosas sealed their permanence in the Iberdrola League last week despite losing to Real Madrid. Eibar’s defeat at the Granadilla stadium gave the women’s Alavés girls the opportunity to continue in the top flight for another year.

The joys have also come from the subsidiary, which rises from the Third Federation to the Second. Last year, between the poor results and the restructuring of Spanish football, they lost two categories in one fell swoop. Yesterday they beat Anaitasuna de Azkoitia 4-1 and signed direct promotion without having to wait for the results of Portugalete, its main rival this year.