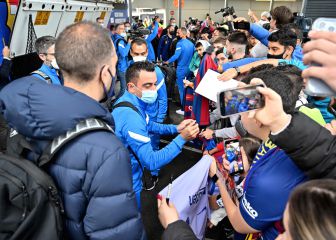 It is evident that Barcelona needs to enter money as if there were no tomorrow and has found the best formula to raise additional income in the American preseason tour that can help curb the precarious economic situation of the club. A tour, which will last 16 days and has already confirmed two matches, one in Miami and the other in New York, but the club’s intention is to complete four friendlies to continue making money.

Thus, if there is no counter-order, the team will leave on July 16 for Miami to do the Americas. On July 19, he will play against Inter Miami, chaired by David Beckham. Afterwards, he will go to Las Vegas to play against Real Madrid on July 23, and then to Dallas for a friendly, possibly against Juventus, on July 26, ending the tour in New York on July 30 against the team from the city, the New York Red Bull.

The two games in the middle are not yet officially confirmed, but the club does not want to miss the opportunity to make money, urgently in need of additional income. And this is basically where the division in the club lies. And it is that the technicians would be in favor of playing only three games -the two confirmed plus the one in Las Vegas-, while the marketing area considers a fourth friendly, in this case the one in Dallas, to be vital.

There is no doubt that heTouring is an obstacle to the work of sports management: neither long trips, nor training in intense heat, nor promotions, nor publicity events, nor matches almost every three days are advisable to prepare for the season, but It is also assumed that it is the price that must be paid if later you want to strengthen the squad and have a competitive team.

It also remains to be seen if the team, which begins preseason on July 4, will already have all its signings in its ranks during the American tour or some will still be in the air. As AS has learned, the club is working hard so that at least the Polish striker, Robert Lewandowski, one of the cornerstones of Xavi’s new Barça, is part of the expedition that travels to the United States.

In any case, when they return to Barcelona they will still have almost fifteen days ahead of them to finish getting ready, since LaLiga will open the curtain on August 12.