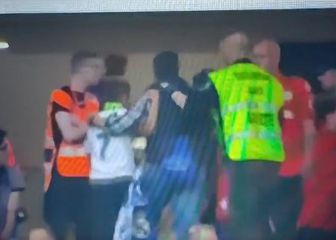 Unfortunately, that was one of the images of the derby at the Metropolitano between Atlético and Real Madrid. The Movistar + cameras captured it: a father and his son, the latter dressed in a Real Madrid shirt, were expelled from the stadium during it. There were hundreds of fans of the white team who were in the Atlético field on Sunday with their shirt and without any kind of problema, but the expulsion of this white fan drew attention. He was holding hands with a child. Was he expelled for wearing the rival elastic? Nothing further. From Atlético de Madrid they explain and clarify what happened.

This Real Madrid fan who was accompanied by his son was expelled “for provoking and insulting” during the first half, as revealed by the club, even going so far as to punch an Atlético fan. The head of stadium security saw him. The National Police decided to expel him for the aggression and insults. The private security of the stadium accompanied him to the lobby under a rain of tension. The police took them to the street. The rojiblanco member was also expelled for participating in the revolt.

“No one has been fired for wearing the Madrid shirt”

A story, this one from the rojiblanco club, which since last night has endorsed testimonies on social networks from people close to the place of the incident. And they say it was like that, just like that. The Madrid fan who was with his son was not expelled “at any time” for dressing and being from the rival team, but for the incidents, the insults and the fight that he provoked, his bad behavior that set that part of the stands on fire in the that he was and that, it is also true, he fired him between insults. “No one has been fired for wearing the Madrid shirt. They can tell you the other 800 who have gone with their Madrid shirt and have not had a single problem. They have kicked him out for touching the coj… and fighting with other fans,” he wrote @GolDeGodin_ On twitter.

For those who kicked out of the Wanda yesterday. Let’s see if you think you can come to the local area with the rival shirt, insult the players, provoke the fans and confront one of them. Lucky they kicked you out and didn’t hit you. And all in front of your son, what a father.

“The famous victim and victim has insulted Savic repeatedlyafter being reprimanded by various fans around him, has raised his hand to an older man (they tell me that he is about 70 years old or so), it is always good to hear the story well, “revealed the user @Statsatm. “He has raised his hand to a fan, has insulted people and has earned expulsion from the field and I have seen it myself in person from inside the field”, said David Arranz (@hispano88). “Totally true. We had them close. I am a madridista and I have been with my 11-year-old daughter surrounded by Atlético and they have treated me very well“, confirmed David Calderón (@kambala72).