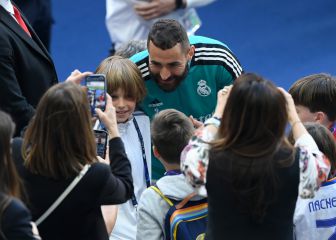 Liverpool and Madrid today return football to its natural state. Two great clubs since prehistory, as Guardiola would say, without additives, free from artifice, emirs and oligarchs, and forced by their history, which taken into account books speak of nineteen European cups. The oldest aristocracy of European football. It is also the clash of two championships, Premier and League, which have been playing their Champions for a long time in the audiovisual and marketing universe, and two coaches of different training. Klopp triumphs at Liverpool by imposing his agenda. Ancelotti triumphs in Madrid by applying an agenda that has been in the club since the beginning of time. Because this was always an institution for players and not for coaches. On that bench only those who understood it shone (Follow today’s game live on As.com).

A quick review of the last hour invites optimism in Madrid. Praisethe only starter with physical problems, has not played since April 26, when he was injured at the Etihad, but he has been at competitive pace for a week and will be Militao’s partner in the center of defense. Liverpool, most demanded by their domestic competitions (has played a cup final and four life or death matches in a Premier that escaped while Madrid was on active rest), he finds himself with more doubts: Salah played half an hour in the last League game after breaking down in the Cup final; Van Dijk, injured in that game, has not appeared again; neither has Fabinho since May 10, and Thiago, who retired last Sunday against Wolverhampton, has barely trained. If he is not ready, Keita will take over. Still, Klopp believes that he will have the rest, who knows in the best shape of him.

In the head of some and others still walks the 2018 final, won by Madrid in kyiv. Six starters from Liverpool and five from Madrid that day will repeat today, but the impression is thatand the English seem stronger (Alisson, Konaté, Fabinho, Thiago or Luis Díaz have improved the team) and the whites, weaker (Varane, Ramos or Cristiano are no longer there and neither Bale nor Marcelo are the ones from then). Over the years, Liverpool has become more territorial (it is the leader in possession in the Champions League, with 60.1%, ten points more than Madrid), more finisher, more recuperator and less vulnerable. In all this he is above Madrid and almost anyone else, but in similar circumstances they saw each other last year and the whites kicked them out in the quarterfinals.

But if the choir is a network, the soloists are in Madrid. Benzema has scored 44 goals so far (the same as Salah in his best year, the one that lost the final in kyiv) and 15 in the Champions League, more than half of the team’s total (28). He is, by far, the player with the most impact in the competition. With him, the team has scored 12 more goals than expected, according to Olocip data. Only in the three previous qualifiers has he achieved ten and he has only been blank in two of twelve games. Vinicius is the best dribbler in the competition, Courtois has made more saves than anyone and Modric is the second passer, after Rodri, the Madrid player from City. Those four players are above the English average.

See also  Correa, after the operation: "Everything went well"

The fatigue factor also favors Ancelotti’s team, and not only because of the calm of the last month. The fact that Liverpool play one more competition (the English League Cup) and that in the Premier only three changes are allowed makes ten of its players spend 3,500 minutes. In Madrid, despite the fact that the rotation is not exactly a weakness of his coach, only six. The general impression is that Liverpool have a notable physical advantage, but the data says otherwise: almost 30% of Madrid’s goals come in the last quarter of an hour, compared to 23% for the Reds. In fact, seven of the eight white goals in the games of the magical comebacks came after 75 minutes. It is in Madrid’s interest that this be resolved by sprinting.

The onces offer little doubt. Klopp will pull his leading team, with Mané of nine, a position to which he has been converted in the second part of the season, and Luis Díaz, the winter supersigning, on the left, with a changed leg. Mendy will have to stop Salah. In Madrid, everything indicates that Valverde will take Rodrygo’s place, although Ancelotti’s message for a long time has been that those who start are as important as those who finish. Camavinga and Rodrygo will be its revitalizing effect. The latter and Firmino have much better records in the Champions League than in their respective leagues. Its effectiveness in Europe is tripled.

On the bench, Liverpool and Ancelotti have been meeting for a long time. The Italian saw himself with the English directing Milan, Chelsea, Madrid (he won both games), Naples and Everton. He also faced him in three Champions League finals: one as a player (in 1984, when he was at Roma, which he was unable to play due to injury) and two from the Milan bench (he lost one and won another). In short, he has seen it all. Klopp explained on the UEFA website this week his desire to leave Liverpool with “a structure and a culture that will serve for when he is gone”. For Ancelotti, on the other hand, it has been enough not to deviate from a traditional recipe that has always fed the club. Today he can be the first coach with four Champions Leagues and Madrid, who have won the last seven finals, take the Fourteenth to his museum, after having liquidated the last champion (Chelsea) and the finalists of the last two editions (PSG and City) . He would seem even natural after a tournament full of supernatural events.