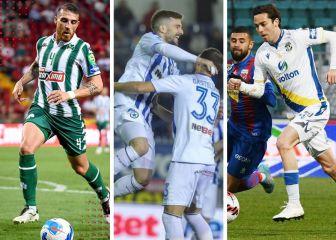 The names of Adrian Riera, Carlitos López, Fran Vélez and Juan Muñiz maybe they are not the most popular Spain. Nevertheless, these four footballers are on everyone’s lips in Greece. The Spanish boom in the Hellenic country is such that the four are among the 20 footballers with the most impact in the Greek Super League for OlocipArtificial Intelligence company.

Adrian Rivera, sixth in the ranking, is the first Spaniard of the four who are among the 20 best rated. The 26-year-old right winger plays for Asteras Tripolis and its impact for Olocip is 8.77. He is the fourth player with the most value in the entire Hellenic competition in passes into the hole, with the ball in play and in shots; and fifth in finishing and offensive plays. The Murcian came to Greek football in 2019 after having played in the Atlético Levante, La Roda, Getafe B, Formentera, Toledo and Villarreal B. Its market value for Olocip is €513,741 and his relationship with Asteras Tripolis ends in 2023.

Carlitos Lopez is the eighth that generates the most impact in Greece with a value of 8.12. The 31-year-old striker defends the shirt of the Panathinaikos. Olocip’s data shows the high level of the attacker. He is the player with the best standing finisher, overall finisher and shot finisher in the entire league. He also ranks second in offensive actions with the ball in play and third in offensive actions.

The forward from Alicante has a long career in football. He has been through Torrellano, Ontinyent, Petrotrest Saint Petersburg, Fuenlabrada, Novelda, Aris Limassol, Eldense, Villarreal B, Wisla Krakow, Legia Warsaw and Al-Wahda from the UAE before arriving in Greece in 2020. His market value for Olocip is €1.9 million. Contract ends in 2023.

Fran Velez Like Carlitos López, he also plays in the Panathinaikos. Vélez does it from the defense and has an impact of 6.73, 13th in the table. The 30-year-old center-back is a market opportunity for next summer when the contract ends in June. Valued at €645,311 by Olocip he is the third player in the top Greek competition in backward passes, clearances and total passes with the ball in play. Among his facet, he stands out for being fourth in recoveries, total passes and defensive plays. The Catalan player arrived in Greece in 2018 to play for the Aris of Thessaloniki and from there he jumped to Panathinaikos. I had previously played in Pobla de Mafumet, Nàstic, UD Logroñés, Almería B, Almería and Wisla Krakow.

Juan Muniz closes, in 17th place, the presence of Spaniards among the players with the best data in Greece. The midfielder of Atromites has a value of 6.13. Muñiz stands out for his standing finish being the second best in this range and the third in the overall finish.

The Asturian, 30 years old, gave his first touches in the quarry of the Sporting up to the first team. From there he went to Mirandese to return to Gijon and pack your bags again heading to Tarragona and Lugo previous step to Volos Greek in 2019 and later to Atromites. Its market value is €452,799 and his contract with the Athenian team ends in 2023.

Players with the most value in the Greek League

* For Olocip, an Artificial Intelligence company.

The list of players with the most impact leads her Pape Abou Cisse. The defender of Olympiacos has a value of 10.39. The 26-year-old Senegalese is the best in defensive aerial duels, clearances, headed goals and total numbers. A whole wall in Piraeus. Records the second best mark in total aerial duels, header completions and actions when the ball is contested without counting set pieces. With a value of 6.1 million euros his name was related to Liverpool.

If we look at the Hellenic domestic competition we find two old acquaintances of Spanish football: Chygrynskiy and Sergio Araújo. The one who was defense of the Barcelona In the 2009/10 season he played for Ionikos Nikalias. Chycristo signed for Barcelona at the request of Guardiola for 25 million euros. He played 14 games and won a League and a Club World Cup. The Ukrainian is 15th in the ranking with a value of 6.36 and his market value is 315,590. best numbers presents Sergio Araujo. The former player of the palmsnow in the AEKoccupies second place with a 9.94. record a value of €1.6 million and he is the best player with foot shots, offensive actions with the ball in play and in general, total shots, goals with foot, with the ball in play and totals.