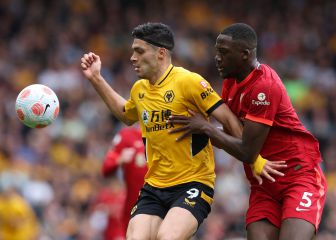 “Why do you always wait until the last day?”was asking ulla klopp to her husband, Jurgen Kloppbefore his match with wolverhampton. But the Liverpool manager had no answer and his team fell short of winning the Premier League. Neither the goals of Mané, Salah and Robertson; that turned Pedro Neto’s initial goal around, served to win the titlethe first to escape the Reds this season, in the absence of the long-awaited Champions League final in Paris, next May 28. A final in which Thiago could be low…

So that, the first to surprise at Anfield was Wolverhamptonwhich took advantage of a placement error of Konate and went ahead on the scoreboard in just three minutes. Raúl Jiménez ran unopposed to the baseline and crossed the ball for Pedro Neto to make it 0-1 on the scoreboard and leave Klopp with a face of few friends. But this Liverpool should not put him in a bad mood…

Rebounded, the locals raised their pressure line to the area of Jose Sa, although they continued to suffer behind their backs. Without Van Dijk, Liverpool’s defense faltered, and if first it had been Konaté who had failed, in minute 17 it was Matip who left only Pedro Neto, very close to serving the 0-2 for the Wolves.

When Liverpol was having the worst time, Thiago appearedwho must have thought that “the best defense is a good attack” and he dropped his heel to leave Mané alone. The Senegalese did not get nervous, he faced the goal and looked for the near post with enough precision to make it 1-1. A goal that opened the Reds’ box of thunder, launched by Aston Villa’s goal at the Etihad that left them closer to the title.

But not everything was going to be so easy and then hee chan another opportunity for the Wolves was pulled out of the hat on the back of the erratic Matipwho he saved Allison in heads-up play just before the break. A bad moment for Liverpool, whose problems were piling up: Thiago left injured and had to give way to Milner in the second half.

The loss of the Spanish midfielder six days before the Champions League final left the team cold Liverpool, who had to wait for Salah’s entrance to loosen up. It was the Egyptian, who was returning from injury, who scored the 2-1 for the Reds, who would make it 3-1 in the 89th minute thanks to a raise of Robertson and they would remain at the gates of leadership. The radios then sounded at Anfield waiting for Aston Villa and Gerrard to win against City, but Guardiola’s team ended up coming back and took the Premier.