The third great novelty of the Japanese firm that we had the opportunity to see yesterday is the Toyota bZ4X. It will be in May when the reception of orders that are already in October will be delivered to those users. From there the idea is to sell a hundred cars a month, a fairly optimistic figure.

It is the first model in a new series of battery electric vehicles. It’s about a Midsize all-wheel drive SUV which will be an integral part of Toyota’s transition to 100% electric mobility. As you can see, it is very faithful in terms of design and technology to the prototype from which it is inspired. 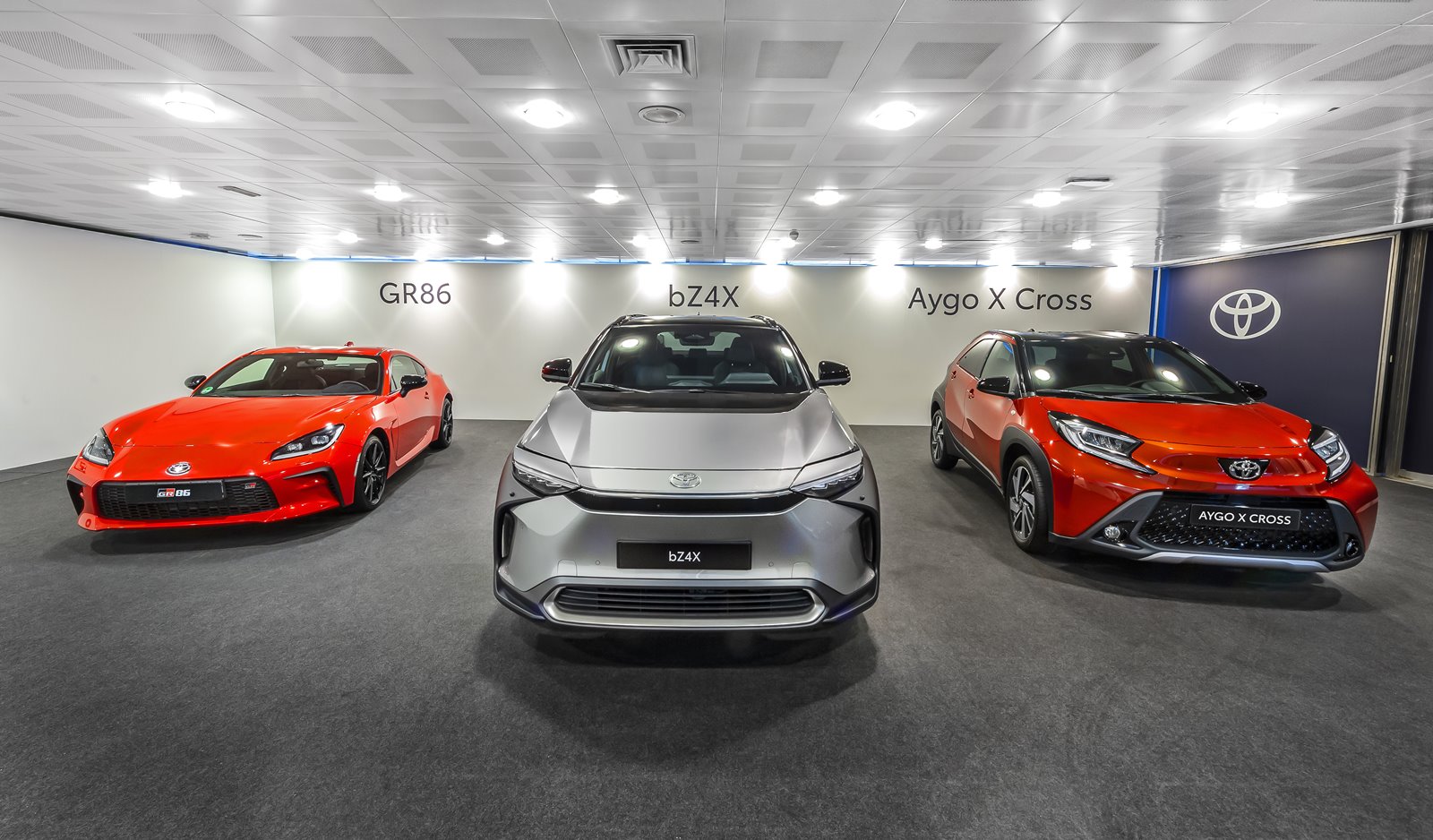 The «bZ» is an acronym for the English phrase that we could translate as “beyond zero”, reinforcing Toyota’s commitment to not only achieving zero carbon emissions and carbon neutrality, but also going further to achieve new benefits for the environment, people and society as a whole.

Toyota aims to offer us no less than 15 electric vehicles, including 7 Toyota bZ models.

The Toyota bZ4X is based on the new e-TNGA modular platform, developed specifically for electric vehicles. A long wheelbase and short overhangs help create a remarkably spacious and open cabin. In fact, rear legroom is equivalent to that of a D-segment model. 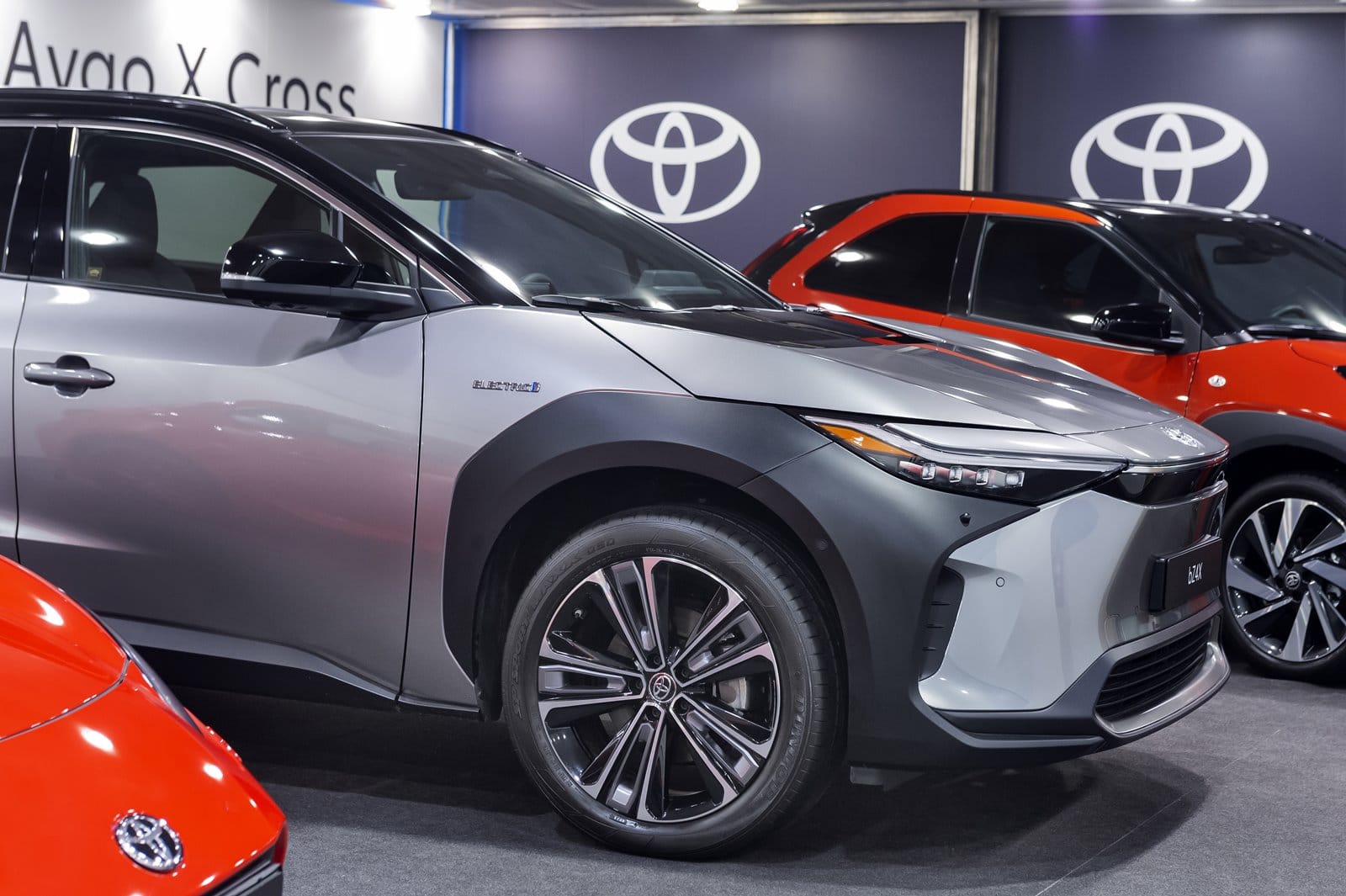 The slim front grille features an adjustable louver to channel air to cool the battery and help reduce wind resistance. The new Toyota bZ4X has been developed by Toyota Motor Corporation (TOYOTA) in partnership with Subaru Corporation (SUBARU).

Uncompromising design for the 2022 Toyota bZ4X

Toyota has developed a elegant and robust design for the bZ4X. The front appearance is devoid of superfluous decorations. It is distinguished by a new ‘hammer’ shape at the front, with slim headlamps and an emphasis on the ends that conveys firmness. On the side, the silhouette is clean, with a reduced overall height.

See also  The Aiways U6ion will arrive in Europe in 2022

We see slim front pillars and a low beltline that reflects the low center of gravity. Wheel arch trims and alloy wheels up to 20 inches They express their all-round character. At the rear, the design focuses on highlighting the corners, with a split roof spoiler and a ‘ducktail’ rear spoiler. 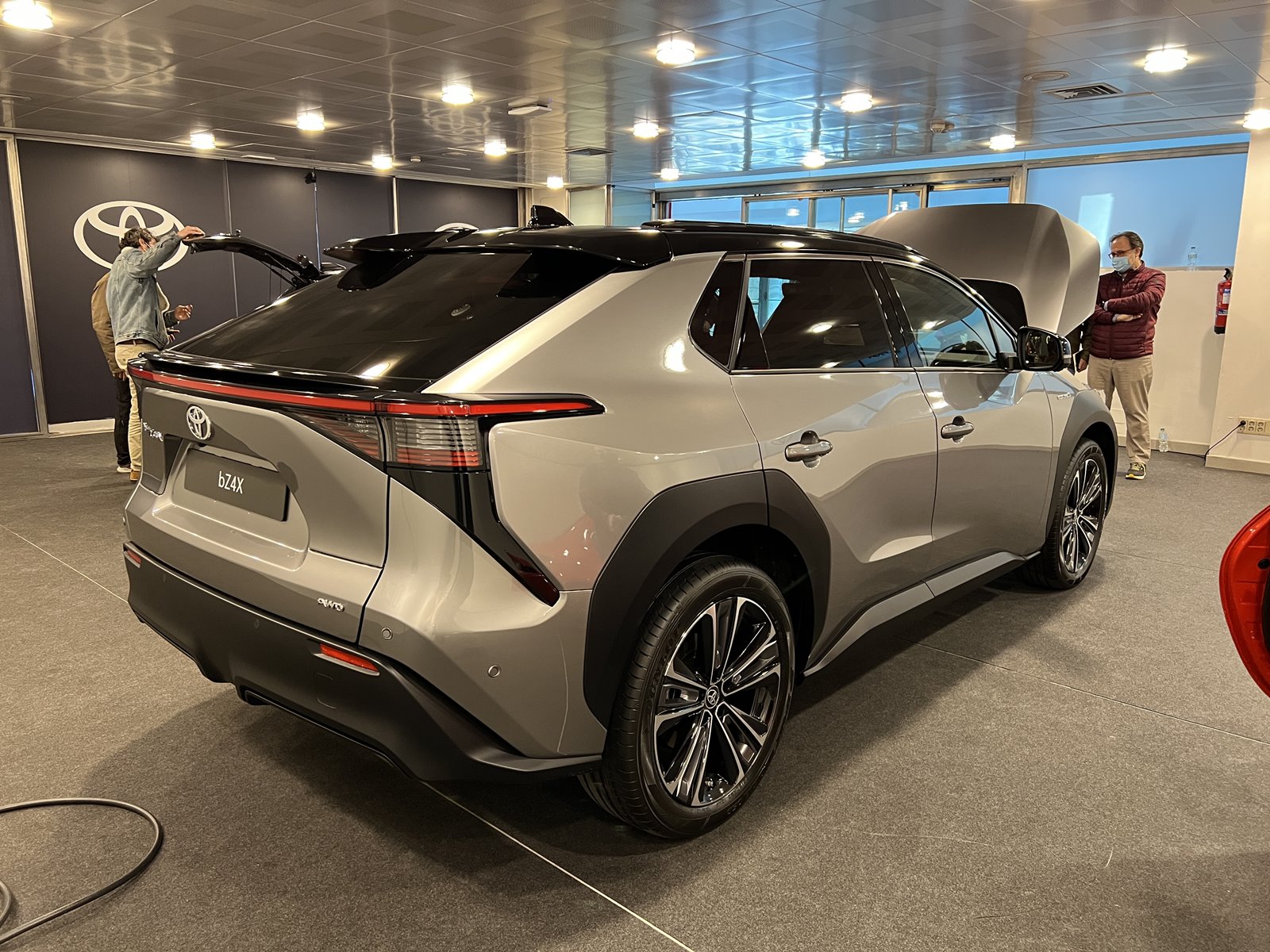 Compared to the Toyota RAV4, the bZ4X is 85mm lower, with shorter overhangs and a 160mm longer wheelbase. The bonnet line has been lowered by 50mm and features a class-leading turning angle of 5.7 meters. The design also incorporates aerodynamic elements that contribute to increasing their autonomy.

The theme of the interior design is ‘lagom’, a Swedish word that expresses that something is ‘simply perfect’. They reflect comfort and spaciousness. Highlights the use of soft textures, high quality fabrics, satin details and the option of a panoramic roof. The dashboard is slim and located further down. 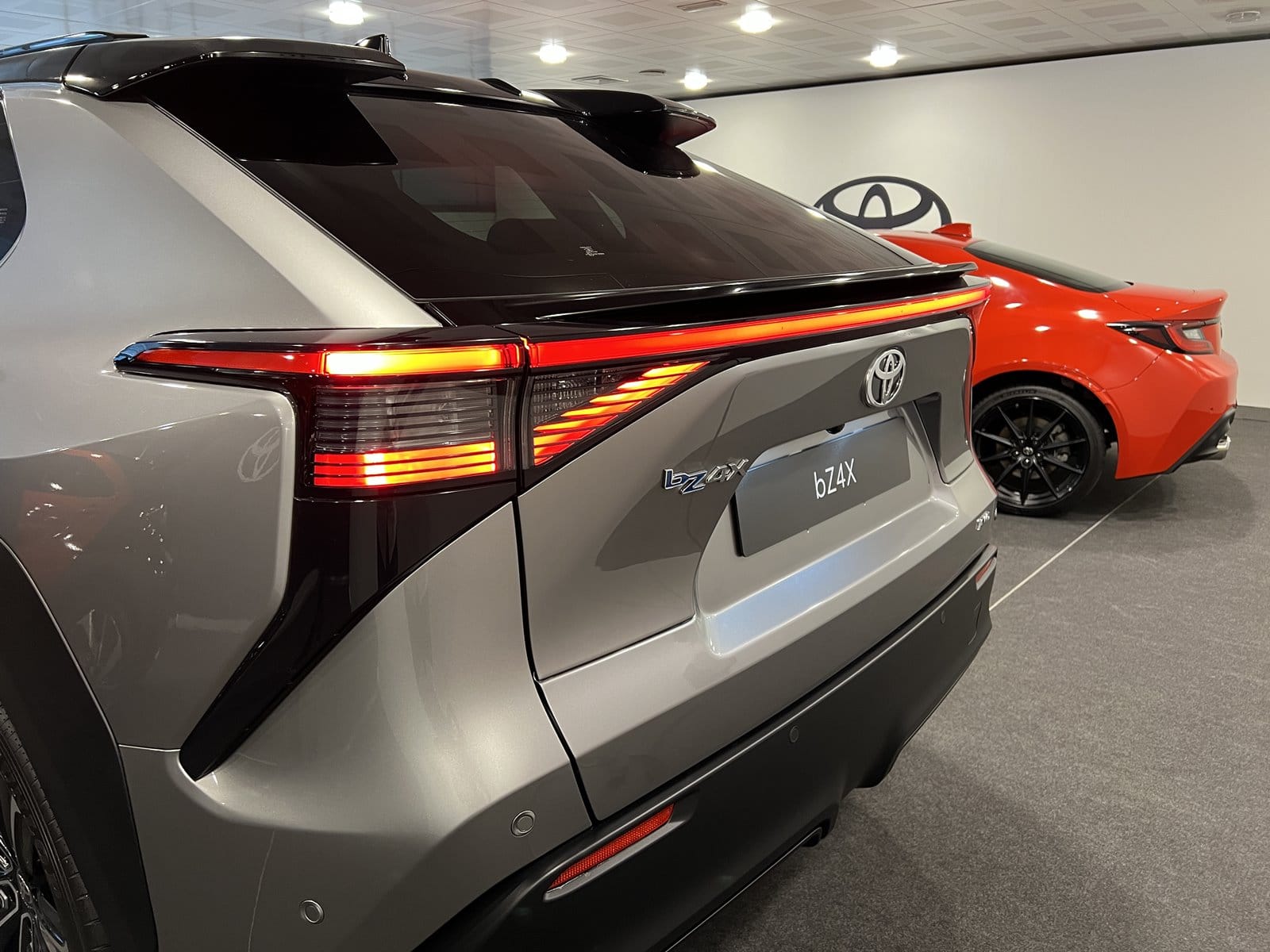 It is made up of a 7 inch screen, which is combined with a 12-inch screen for the new infotainment system. The long wheelbase offers plenty of interior space. Boot volume is also generous, with an adjustable tray. With the rear seats in the use position, it offers up to 452 liters capacity.

Under the skin of the new electric

We will see two mechanical options in the Toyota bZ4X. The basic model with front-wheel drive mounts an electric motor 204 hp (150kW) and 265Nm of pair These figures allow it to accelerate from 0 to 100 km/h in 8.4 seconds and reach a top speed of 160 km/h. The model with all wheel drive generates a maximum power of 217.5 hp Y 336Nm of pair

Top speed is the same, but it completes 0 to 100 km/h in 7.7 seconds (provisional performance figures until homologation). The system offers the option of driving with a single pedal. The high-density lithium-ion battery has a capacity of 71.4 kWh, with which an autonomy of more than 450km (WLTP). 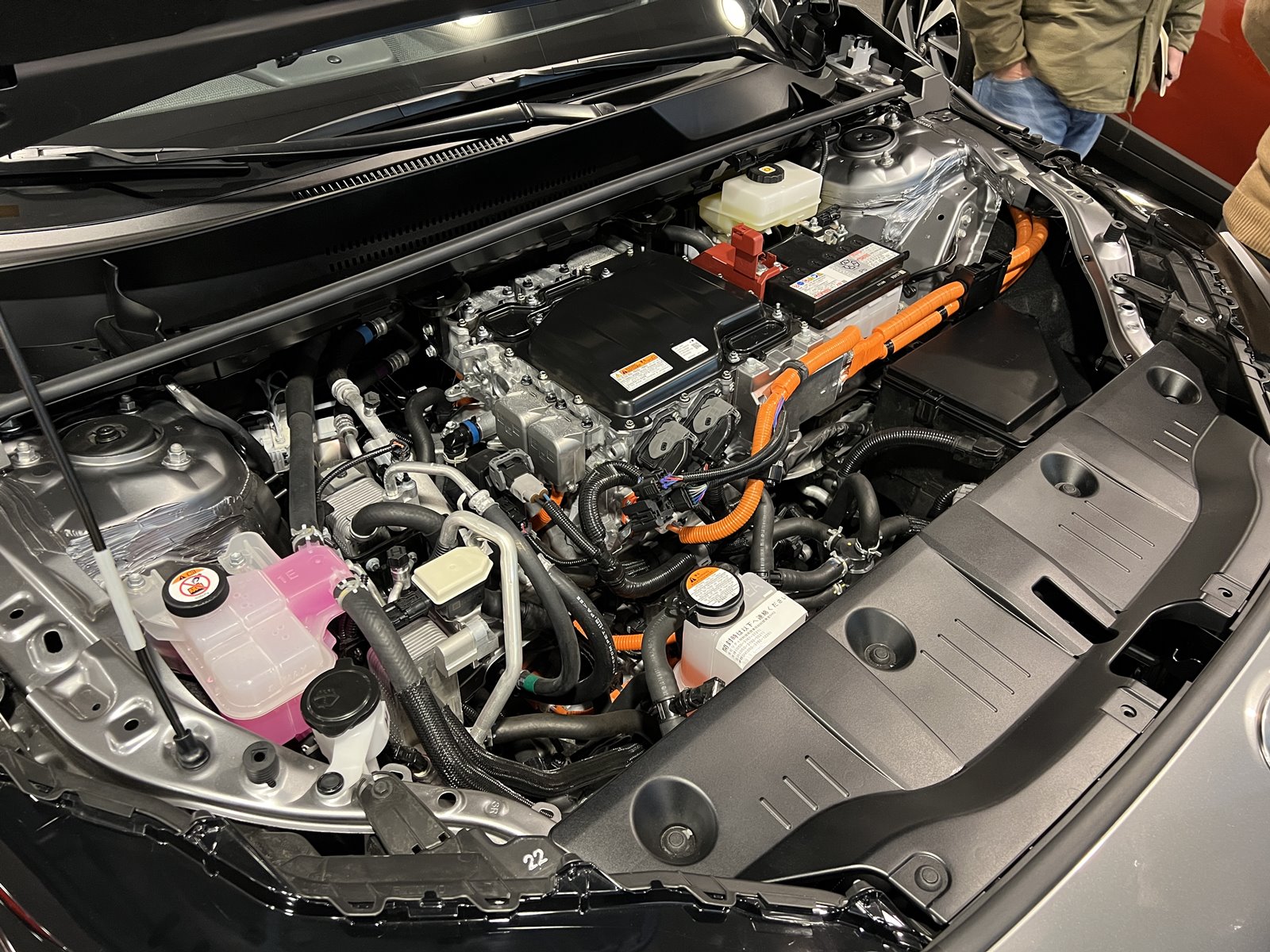 The battery is water cooled.

It has a heat pump for air conditioning and the battery can be charged to 80% in about 30 minutes with a charging system. 150kW fast charge (CCS2). This model will have a 11 kW three-phase charger on board. Toyota expects a reduction in battery performance of just 10% over 10 years of use, or 150,000 miles.

It is worth mentioning that the all-wheel drive model mounts independent 80 kW motors on both axles. Includes the XMODE function, with different driving modes, settings for snow/mud, thick snow and mud -below 20 km/h-, and grip control for tougher off-road driving -below 10 km/h-. 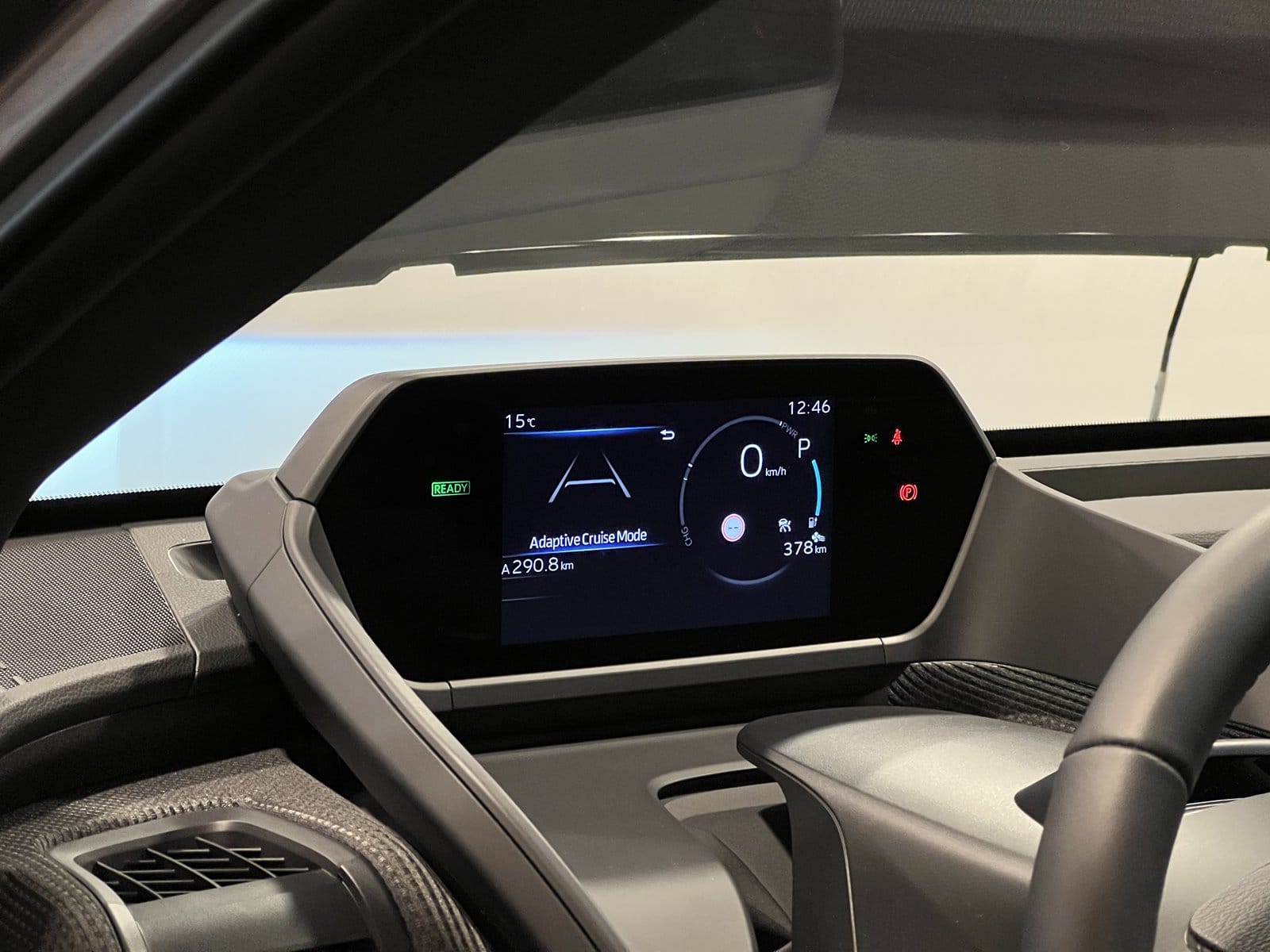 The battery will have a guarantee of 10 years or one million kilometers.

Interesting news for the 2022 Toyota bZ4X

The bZ4X will be the first production Toyota model to offer the cable steering system –One Motion Grip-. Of course, its introduction in Europe is planned for later. This electronic system dispenses with the mechanical connection between the steering wheel and the front wheels, and adjusts the angle of the tires precisely according to the driver’s intention.

The traditional steering wheel is replaced by the control One Motion Grip, whose operation is much easier and smoother, without the need to cross your arms when turning. Thus, it can be reached from lock to lock just by turning 150 degrees. Since the system has no physical connections, possible tire vibrations in the steering are suppressed. 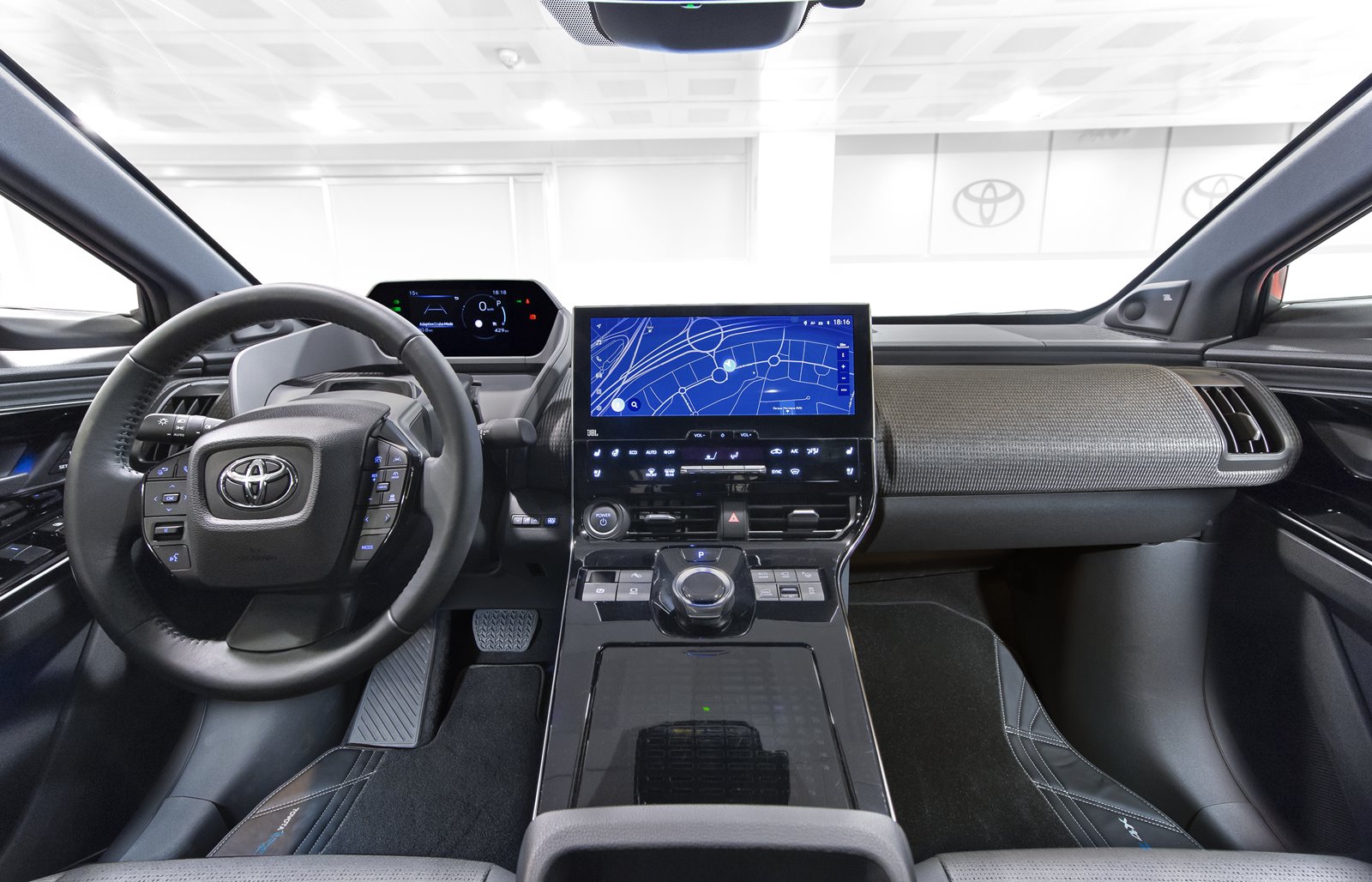 However, the driver can still notice sensations such as the irregularities of the surface on which it travels. In addition, its characteristics can be modified depending on the selected driving mode. There will also be no roof with solar panel optional as in the Hyundai Ioniq 5, which can be used both with the vehicle on and off.

See also  Toyota Glanza, this is the 2022 version for India

With the bZ4X we will also see the third generation Toyota Safety Sense system. It will have new and improved features that offer greater protection. Among the novelties, an expansion of the Pre-Collision Safety System stands out. On the other hand, we will see a new multimedia system with updates of software wireless.

You can buy the 2022 Toyota bZ4X for leasing

Toyota has introduced its new battery electric vehicle in Europe with a completely new approach to the buying process and customer experience. The objective is that the majority of new sales in Europe are made through a nnew
contract of leasing all inclusive.

The idea is that this new contract covers the vehicle itself, but adding the maintenance, the provision of a Wall charger and access to connected services. One of the largest vehicle charging networks in Europe would also be included. 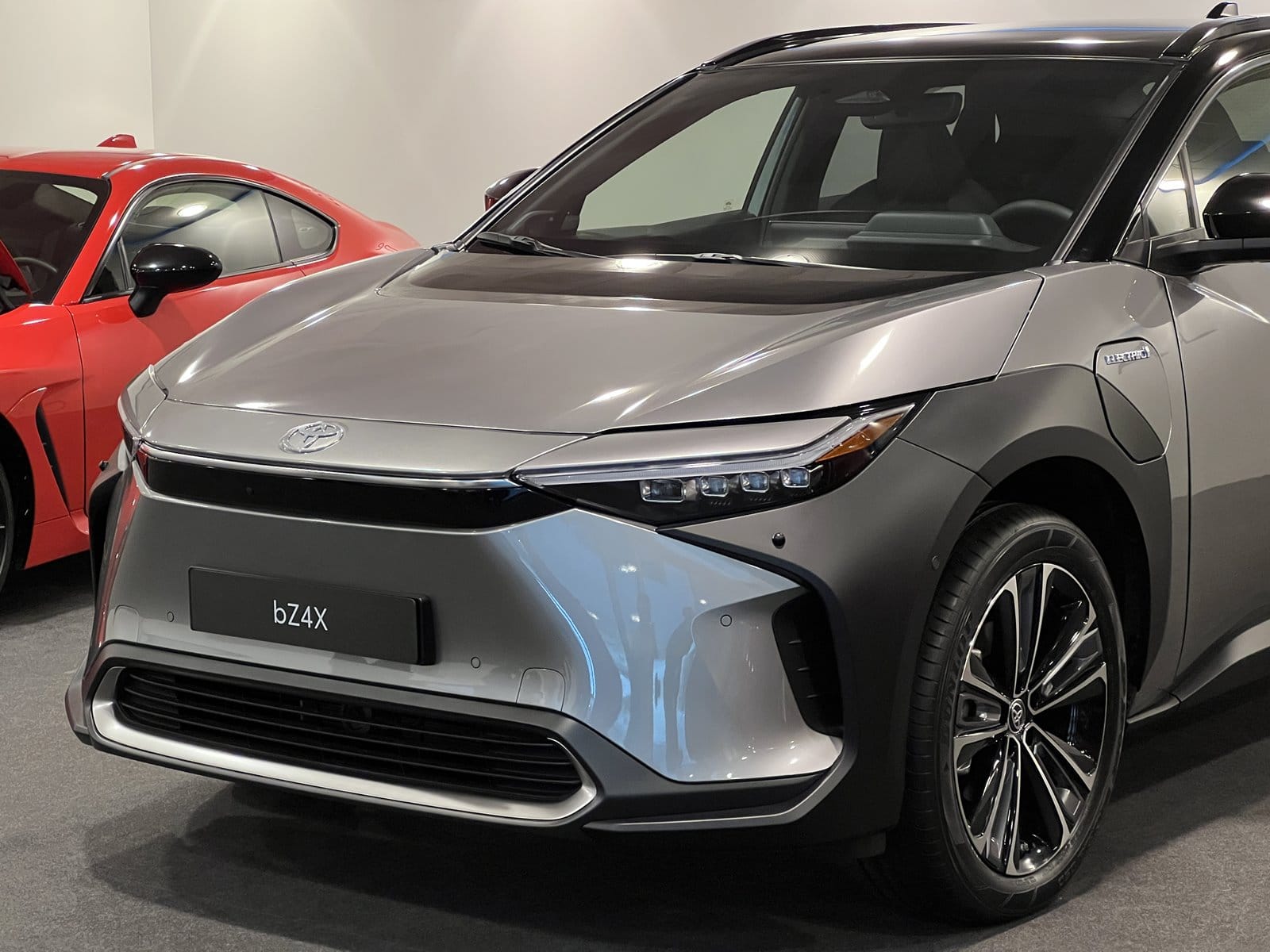 Those who wish may include in the leasing a sure of Toyota, as well as assistance on the highway Y accessories for the vehicle. In either case, Toyota will work with its dealers to ensure that customers can get the best solution for their mobility requirements.

For now the prices for Spain are unknown. It will not be until May when they are announced, but in some countries of the European Union they have already been announced and it seems that they will be around between 45,000 and 50,000 euros starting before state aid. A figure similar to that of the Toyota RAV4 PHEV.