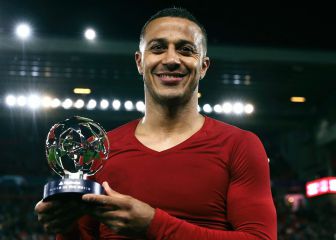 Thiago has bordered on excellence. Or he has got it, directly. The Spanish midfielder has been named MVP of the match by UEFA. He hasn’t scored, but he hasn’t made a single mistake. To be more precise, he has indeed missed four passes, of the 103 he has attempted. 99 of them he has successfully completed. His example is the best summary of this Liverpool. It is a team that suffocates, does not think, plays at the first touch, precise, always looking forward. A real cyclone that has devastated Villarreal. The difference was short even for that claustrophobic feeling that Unai Emery’s men have felt in their own area.

The Spanish international, who today is not a primary figure in the National Team, has been the axis of this entire mechanism. Escorting Fabinho in midfield and moving around the field, although with more incidence on the left side, he has touched the ball a total of 119 times. It is time to recover the previously exposed data: 103 passes attempted in 119 touches. It is always receiving, touching, without margin for error, without time or space for Villarreal’s defense to reorder itself.

To make matters worse, when the party was still sailing in that phase of docile dominance, Thiago had the idea of ​​releasing a thirty-meter whip, which made Rulli’s goal post rumble. If he had broken the net he would have signed one of the most unforgettable nights of his sports career, if not the most. He has also intercepted five balls, made a successful tackle, completed a dribble and made nine passes over his nine attempts.

See also  One of lime and another of sand for PSG

Jurgen Klopp melted into a hug with him after the conclusion, a sign that he was his best soldier on the pitch. Thiago already signed a brilliant stage at Bayern Munich, despite the fact that he went more unnoticed in the media. Upon arrival at Anfield, there were doubts about his adaptation to the hectic pace of the Premier League. Even his physical consistency, which has made him miss more than a dozen games this season between his leg, hip and coronavirus.

But the German coach keeps a endless confidence in the figure of Thiago, who has returned to settle in the eleven after all the problems he has presented in the current campaign. His technical quality is unquestionable and over time he has gained star leadership and consistency to cover the field without ending up broke. Gone is that time when the Spaniard was described as a footballer of decorations, security and lack of decision.

Thiago is pure structure, the column that today, together with Fabinho, has supported back and forth. He has been the one who has traveled the most distance: 10.36 kilometers. Also the one that has presented a better percentage in shipments. A fully deserving MVP in nothing more and nothing less than a first leg of the Champions League semifinals. A direct message to Luis Enrique, who will already suffer from headaches to order his spinal cord in the next edition of the Nations League and in the unavoidable event in Qatar.

“If we marked everything we generate, this would not be so nice”

After the conclusion of the match, he attended the Movistar Plus + microphones to analyze the match of his own. Asked if the result is short after what was seen throughout the 90 minutes, he was more than satisfied: “In the end we have to take this game as if it were a Champions League semi-final. It is a very positive result, without ceasing to be us. It will give us confidence.”

Of course, despite Villarreal’s insistence on keeping the 0-0 lead in the first half, Liverpool were already sharpening their claws to take a victory for the second leg: “I don’t think it was just the second half. We generated from the beginning of the match. It’s football, if we marked everything we generate, this sport would not be so beautiful“. He also understands that the Villarreal fans believe like the first day: “Everyone has to look out for their team. We now rest our legs for the important match of the weekend. Then we will think about the return“.

Henderson He also spoke on English television BT Sport: “They are a very organized team and we knew they were going to make it difficult for us. It has been very important that we have kept trying and that we have believed that at some point we would be able to open the scoring. When you play against a team that defends so far back you always need a bit of luck, we got it and that gave the crowd a boost. The pressure we put on throughout the game worked and made it very difficult. Of course, the tie is still alive and it will be difficult in the second leg“Of course, if they are at the same level as on Wednesday night, especially Thiago, the tie will be red.