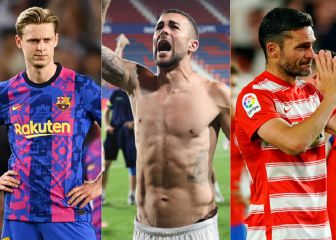 The 21-22 season has already ended in the First Division and it has done so with less turbulence in terms of refereeing. The VAR has once again been the protagonist in several sections of the campaign and its influence has been decisive for several teams. Without the technology a ticket for the Super Cup would not have the name of Barcelona, ​​Villarreal would be in the Europa League and relegation would not have been mourned in Los Cármenes.

The VAR has lifted its foot from the accelerator this season and its interventions have been reduced. From 155 a year ago to 143 today. He has been key on several fronts in qualifying. There would be changes in the European positions and in relegation if we compare with how the table would have been without the VAR (the conceded and annulled are added and subtracted and the goals achieved via penalties are removed after a VAR warning. In the case of penalties canceled by technology, these goals are not added as it is not guaranteed that they can be transformed).

For example, Barcelona would not have finished runner-up, since that place would be occupied by Sevilla (they would have added five more points) and they would be the ones who would play in the next edition of the Super Cup. In the other two European competitions there would also be changes: Villarreal would go to the Europa League and Real Sociedad to the Conference. And one of the most important changes due to its hardness: Mallorca would have been the team that would have accompanied Levante and Alavés in relegation. Granada would have been saved.

Valencia is the team that has experienced the most VAR interventions on the pitch (22), ahead of Granada (20) and Villarreal (18). The least have been Barcelona and Elche (9 both). LThe ones that have ‘suffered’ the most by correcting a decision against them have been Valencia and Getafe (both 10), ahead of Real Madrid and Villarreal (9). In the chapter with the most ‘beneficiaries’ are Levante and Granada (11) along with Valencia and Athletic (10).

See also  Militao writes to the Eder boy: "You are with the best"

Teams most benefited and harmed by the VAR

Rui Silva’s penalty on Lozano. Negredo throws it and it is stopped by Rui SIlva, who had both feet in front of the line. He sees the VAR and repeats himself. Negro brand.

Montoro’s goal annulled by the VAR for offside.

The VAR warns of a hand inside the Ciss area, although Rayo claimed a previous foul. Alberola Rojas sees it and signals a penalty. Roger transforms it.

The referee goes to the monitor and annuls Aspas’ goal for using his arm to score.

The VAR warns of a penalty by Alberto Moreno on Vencedor for stepping on his foot. He points it out and Muniain transforms it.

Entrance from behind Merino to Luis Suárez that prevents him from finishing off. Munuera signals the maximum penalty. Luis Suárez transforms it.

Goal by Carrillo, who was ahead, but the ball bounced off Lejeune. The VAR recommends reviewing the review when considering that this offside should be sanctioned, since it understands that the Alavés player does not try to play the ball. Gil Manzano, after seeing the replay on the scoreboard, decides to cancel it.

Ocampos’ goal annulled by the VAR due to a previous handball by Fernando.

Lateral center in the Atlético area that hits Lodi’s hand. The VAR warns and González Fuertes signals a penalty. Bardhi transforms it.

Kroos’ goal disallowed due to previous offside by Asensio or Vinicius, but the VAR says they were in a legal position and it is granted.

The linesman disallowed Vrslajko’s goal as he was deemed offside, but VAR conceded the goal.

The VAR warns of a handball by Ocampos when he was in the barrier during the launch of a free kick. The referee signals a penalty after going through the monitor and Joselu scores.

The referee signals Saveljich’s penalty on Hugo Duro, but the linesman signals offside. The VAR says that he was in a legal position and the penalty is awarded. Soler transforms it.

Iñaki Williams’ goal disallowed for offside that ended up being granted by the VAR.

The linesman cancels Jorge Molina’s goal, but the VAR grants it.

Guido Carrillo’s goal that was annulled at the request of the VAR for committing a foul on Maximiano by snatching the ball from his hands.

The VAR warns of a Parejo hand with which he helps himself to score a goal. Alberola annuls the goal.

Negredo’s goal disallowed at the request of the VAR for a foul by Sobrino on Diego López.

The VAR warns of a handball by Pere MIla inside the area. De Burgos points it out and Modric converts the penalty.

Ledesma recklessly comes out to get the ball and hits Angel’s head with his knee. The VAR warns Del Cerro and a penalty is awarded. Muriqi transforms it.

Sancet’s disallowed goal that the VAR validates as he is in a legal position.

Negredo’s hand in the area warned by the VAR. Alberola points it out and Mayoral transforms it.

The VAR warns of a Battaglia handball inside the area. The referee signals the penalty and Willian José converts it.

The linesman annulled Escalante’s goal for offside, but the VAR conceded it.

The VAR warns of a handball by Barragán inside the area and after going through the monitor the referee whistles it. Memphis transforms it.

Mayoral’s goal that was annulled via VAR because he took the ball from a rebound from a clearance that hit him in the arm and he later shot.

Rafa Mir’s goal that was annulled, at the request of the VAR, due to a handball by the imminent attacker himself. He accommodates the ball with his arm and scores.

Olivera’s goal that was annulled for offside after the VAR notice.

Galhardo’s goal disallowed due to an offside interference by Aspas on Alaba.

The VAR validates Berenguer’s goal, which had been annulled for non-existent offside.

The VAR called the referee for a handball by Mario Suárez. Hernández Hernández signals a penalty and Luis Milla transforms it.

The VAR warned of a penalty from Alcaraz on Borja Iglesias. After seeing it on the monitor, the referee signals the maximum penalty. Borja Iglesias transforms it.

The linesman annulled Raúl García’s goal, but the VAR conceded it.

Hand of Raúl de Tomás that warns the VAR and that the referee signals a penalty.

The referee, after seeing the action on the monitor, annulled Lejeune’s goal for a previous handball.

Own goal by Koundé that was annulled at the request of the VAR for interference offside.

Javi Puado’s goal annulled by the VAR for offside.