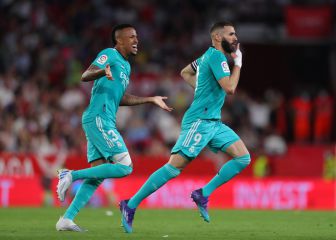 Real Madrid hit LaLiga. The whites grab a handle of the title after the comeback against Sevilla. They increase their advantage in the leadership to fifteen points with respect to Seville and Barcelona, although the azulgrana have two fewer games. This victory gives Real Madrid a boost in spirit in the championship straight, with 18 points still up for grabs.

The white team appeased the attempt to give life to LaLiga and the leadership is more consolidated than ever with the victory against one of their direct rivals such as Sevilla. Barcelona, ​​which has two games pending (the one against Cádiz this Monday and the postponed one against Rayo), could only cut Real Madrid’s lead to nine points. This means that the Whites can still afford up to three more setbacks in the remaining six games. It would be worth it for Barcelona to tie Real Madrid on points, since they have won the goal average, but it seems very complicated for that to happen. Ancelotti’s men have a calendar that only has one complicated exit, to Atlético. The rest seem affordable for the current leader (Osasuna, Espanyol, Levante, Cádiz and Betis). Barcelona has to face Betis, a direct rival for the Champions positions (ticket that Xavi wants to secure); while Sevilla el sorpasso has it almost impossible. They have lost their goal average with the whites and on top of that they also have a direct duel against Atlético, who like them are playing for being in the European zone.

With the current advantagein the event that Madrid and Barcelona do not stumble in the games that lie ahead, the whites could be champions in the third to last day of the League, against Levante. Although any Barça stumble, the alirón could be brought forward, even if it is in the Metropolitan. For this, Barcelona has to add one point less than the whites until then.

He has earned it to: Atletico* and Seville

He has it tied with: none.

You have it lost with: Barcelona

He has earned it to: Real Madrid and Seville

He has it tied with: Athletic

You have it lost with: none.

He has earned it to: Athletic*

He has it tied with: none.

You have it lost with: Barcelona and Real Madrid.

He has earned it to: none.

He has it tied with: Barcelona

He has lost it with: Seville* and Real Madrid*.

This is the fight for salvation

The fight for salvation is heating up. Teams like Levante and Alavés were considered dead a couple of days ago, but in recent games they have managed to react and are turning the descent upside down. Morales pulls the boat from Levante and leaves the last position in the table and they already have 25 points, four of the permanence positions. There are still 18 points to share in the remaining six games. The teams already take out calculators to do the math, see what results suit them to continue in the First Division and check their calendars to see how complicated they have it.

The average number of points to be saved in the last five years is 38. Although in the last two seasons it was lowered (last year Elche was saved with 36 points and two years ago it was enough for Celta to get 37). With this average, the team from Vigo (already with 36 points) would be guaranteed salvation. Teams like Elche (35), Rayo (34) and Getafe (32) would also be close. But they should not be neglected, since they have several direct duels for salvation that could put them in trouble despite having a good cushion of points. Cádiz, Levante and Alavés will try to turn the situation around in the remainder of the League after spending almost the entire season in the relegation zone. They know that the remaining games are key and above all every goal. The classification for the lower zone is so tight that it could be decided by the goal average. In other words, in the event of a tie on points, the one who has scored the most goals in their direct confrontations would finish above. Levante in the last five days has added 7 of the 15 points at stake. While teams like Granada and Mallorca have only added four and three in the same time. Cádiz, who plays this Monday against Barcelona, ​​​​if he wins, he could heat up the permanence even more.

This is the goal average in the fight for permanence

He has earned it to: Alavés, Cádiz*, Mallorca, Granada and Getafe*.

He has it tied with: Lightning.

You have it lost with: I raised.

He has earned it to: Getafe*, Granada, Majorca* and Alavés.

He has it tied with: Elche, Cadiz and Levante*.

You have it lost with: no one.

He has earned it: Levante, Cadiz, Majorca and Granada.

He has it tied with: Alaves.

You have it lost with: Ray* and Elche*.

He has earned it to: Alaves and Majorca*.

He has it tied with: Cadiz and Levante.

He has lost it with: Lightning, Elche and Getafe.

He has earned it to: Alaves*.

He has it tied with: no one.

He has lost it with: Rayo*, Levante, Cádiz, Granada*, Getafe and Elche.

He has earned it: I raised.

He has it tied with: Lightning and Granada.

You have it lost with: Mallorca, Alavés*, Getafe and Elche*.

He has earned it to: Majorca and Elche.

He has it tied with: Lightning* and Granada.

He has lost it with: Alaves*, Cadiz and Getafe.

He has earned it to: I raised*.

He has it tied with: Getafe.

You have it lost with: Rayo, Mallorca*, Granada, Elche and Cádiz*.

How do the tiebreakers work in the classification?

one) “If at the end of the championship there is a tie between two clubs, It will be resolved by the greatest goal difference in favor, adding those for and against according to the result of the two games played between them”.

Example. Match of the 1st round: Team A 1- Team B 3; 2nd round: Team B 5- Team A 2. The overall result between their clashes would be Team A 3- Team B 8, therefore Team B would be ahead in the standings by having scored more goals.

two) In the event that both teams had scored the same goals in both games (8-8, for example), another solution would have to be found: “It will also be decided by the greatest goal difference in favor, but taking into account all those obtained and received in the course of the competition”.

3) And finally, if the goal difference remains tied (A and B have +32). The RFEF establishes: “If the difference is identical, the one who has scored the most goals will be the champion or in a better position.”

Example. In this case, as we said before that team A had scored 80 goals and team B only 62, it would be team A that was ahead.

Tie between more than two teams

But there is not always a tie on points between two teams, circumstances can arise between three or more. Which would lead to solving this dilemma by another mechanism:

to) “For the best score corresponding to each according to the results obtained between themas if the others had not participated”.

c) For the greatest difference in goals scored and conceded, taking into account all the matches in the championship; and, being that one identical, in favor of the club that had scored the most.

d) Ultimately, if the eventual tie is not resolved by the above rules, will be decided in favor of the highest ranked club according to the scales of “Fair Play”, that are specified by the RFEF Board of Directors at the beginning of each season, publishing them by Circular.